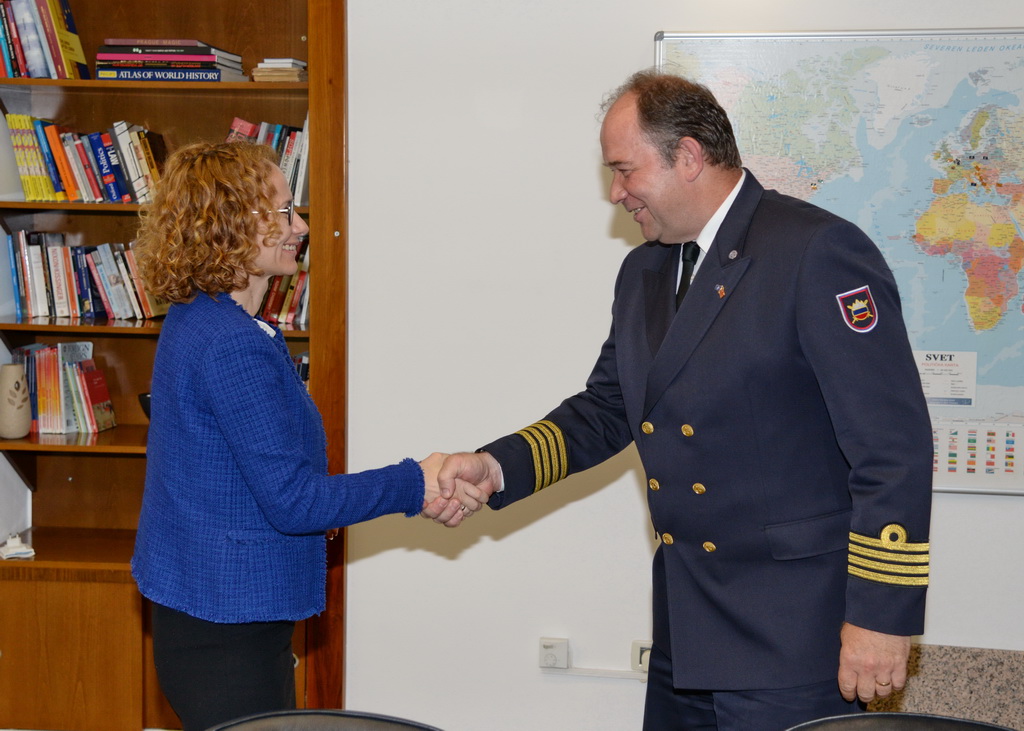 Interview with Captain Gorazd Bartol, Chief of the Military Liaison Office in Skopje.

European Western Balkans: Dear Mr. Bartol, thank you for your time for this interview. You assumed the position of Chief MLO Skopje about a year ago. What are the issues you found the most important in Macedonia during this period?

Gorazd Bartol: For more than two decades the main issue for the country has been its economic progress. This is closely connected to the process of Euro-Atlantic integration, which the former Yugoslav Republic of Macedonia has decided to embark upon. Important opportunities have been missed in the past years and the population had become less optimistic about the future. However recently, following months of political crisis, there seems to be a more upbeat mood in the country with regard to the way ahead. NATO welcomes the formation of a new government. This is a step in the right direction. It is now important that the government pursue reforms; and that all parties put their divisions aside, engage constructively in the political process, and work in the interest of all people in the country.

EWB: The issue over the country’s name is one of the obstacles for its membership in the alliance. Is it the biggest one?

GB: More than nine years have passed since the decision from the 2008 NATO Summit in Bucharest that the invitation “will be extended as soon as a mutually acceptable solution to the name issue has been reached, within the framework of the UN”.  The Bucharest decision stands and has been reiterated in the following NATO Summits.  At the Warsaw Summit in 2016 NATO Heads of State and Government strongly urged “intensified efforts to find a solution to the name issue, within the framework of the UN.” Therefore, the name issue remains the main obstacle for country’s membership in NATO. In this context, we commend the recent steps taken by the government to engage constructively on the name issue. During President Zaev’s visit to NATO Headquarters on the 12th of June, the NATO Secretary General welcomed, on behalf of NATO, “the very clear message from the new government that they will now intensify the dialogue with Greece to try to find a mutually acceptable solution within a UN framework.”

Resolution of the name issue is crucial. Together with a mutually acceptable solution to the name issue rests, also, the importance of reform and stability in the country. In Warsaw last year, NATO leaders encouraged “the building of a fully functioning multi-ethnic society based on full implementation of the Ohrid Framework Agreement of 2001” and urged “all political parties in the country to fully implement their commitments under the Przino Agreement of June/July 2015” and under this framework “to engage in effective democratic dialogue, as well as to strengthen the rule of law, media freedom, and judicial independence.” We are encouraged by the fact that the government has already started to work closely with EU Commissioner Hahn and Mr. Priebe on urgent reform priorities, to which NATO also attaches great importance. In the end, reforms carried out in the interest of all people in my host country are beneficial for three reasons: they help to consolidate stability within the country; they help the country moving towards Euro-Atlantic integration; and they strengthen the country’s resilience against interference from outside.

I would add that throughout the years the country has become an important partner for NATO. For instance, for years the troops from my host country have served with honour in Afghanistan, often under difficult conditions. NATO values this continued contribution to our Resolute Support Mission to train, advise and assist the Afghan National Defence and Security Forces, as well as the country’s contribution to the funding of the Afghan security forces, through the Afghan National Army Trust Fund. It is a clear sign of my host country’s commitment to international security. So, we look forward to further strengthening our partnership and support, as the country moves towards Euro-Atlantic integration.

EWB: How do you asses the security situation in the region and the country’s role in it? What are the biggest threats for security in the region?

GB: NATO fully understands the importance of this region, having helped end two ethnic wars. We have invested a lot in the Western Balkans and continue to do so. Stability and security in the region benefits stability and security in Europe. We have seen much progress over the past decade. But we also see backsliding in some areas, and at times ethno-nationalist rhetoric, the lack of good governance and rule of law. I really hope that the atrocities that we witnessed after the violent disintegration of the former Yugoslavia will not happen again; I also hope that efforts will continue to be made to foster economic progress, hence decreasing the risk of nationalism rising from perceptions of economic deprivation amongst the people. The Western Balkans continues to require the assistance and support of the international community and we are prepared to do so. But political leaders in the region have a responsibility to pursue urgently needed reforms, work for the benefit of all their citizens and promote good neighbourly relations.

We can see the positive effects for those who have pursued rigorous reforms and demonstrate good governance. A good number of Western Balkan countries have undertaken important steps towards Euro-Atlantic integration. Some have already joined Euro-Atlantic institutions. As a result, they are in a better position today and their citizens enjoy higher standards of living, more security and stability and greater opportunities for their families. As a positive example in this respect I can point to Montenegro, which has recently become the 29th member of NATO.  This would have been unimaginable only 15 years ago. Clearly, developments in Skopje in the recent past have not had a positive effect on regional security. At their meeting in Warsaw, NATO Heads of states and government stated that such political developments had taken “the country further away from NATO values.” We are encouraged by the fact that the situation has now stabilized and that the very heated, political rhetoric has started to be replaced by a more constructive discourse.

EWB: After President Ivanov gave the mandate for the formation of the new Macedonian Government to Mr Zaev, do you expect major changes in the relations of the country with NATO?

GB: In general, democratic values, rule of law, domestic reforms, and good neighbourly relations are vital for regional cooperation and stability. Against this background, NATO will continue to support the Euro-Atlantic aspirations of countries in the region, including my host country’s Euro-Atlantic aspirations and we are looking at ways to provide further support in those areas where NATO can make a difference. The formation of a new Government is a positive step forward, which we welcome and our initial discussions with the new government, both here in Skopje and in Brussels, were very positive and encouraging.

The new government has declared NATO membership as a key policy priority; that it wants to work constructively on a mutually acceptable resolution of the name issue; and that it is determined to move the process of reform of national security institutions, forward, as also brought to my attention by the new Minister of Defence. All those issues are crucial for the country’s prospects for future NATO membership. Therefore recent developments, including Prime Minister Zaev’s visit to NATO Headquarters this past June, the foreign minister’s visit to Athens, and Prime Minister Zaev’s visit to Sofia all represent steps in the right direction.

GB: The NATO presence in the country after the 2001 conflict has progressively decreased. Currently, we have a relatively small NATO Liaison Office with the mandate to advise the government on the reform of its defence and security institutions, on the prospect for NATO membership, and the country’s support to other NATO-led operations and missions.

I am convinced that a continued NATO presence is needed. First of all because this is what the national authorities want; notably in the areas mentioned above. Secondly, because for NATO it is clear that what happens in the region has a direct impact on Euro-Atlantic security. Therefore, NATO will remain fully engaged. It continues to provide its own contribution to regional security; and it continues to support the Euro-Atlantic aspirations of the countries in the region, including of course those of my host country. Furthermore, following the establishment of a new government in Skopje and in light of the commitment this government has undertaken to move reforms forward, I expect our office to continue playing an important advisory role, especially in support to the government’s plan to review the overall national security and defence sector. We are in Skopje to support our host country.

EU ready to integrate Montenegro as soon as possible