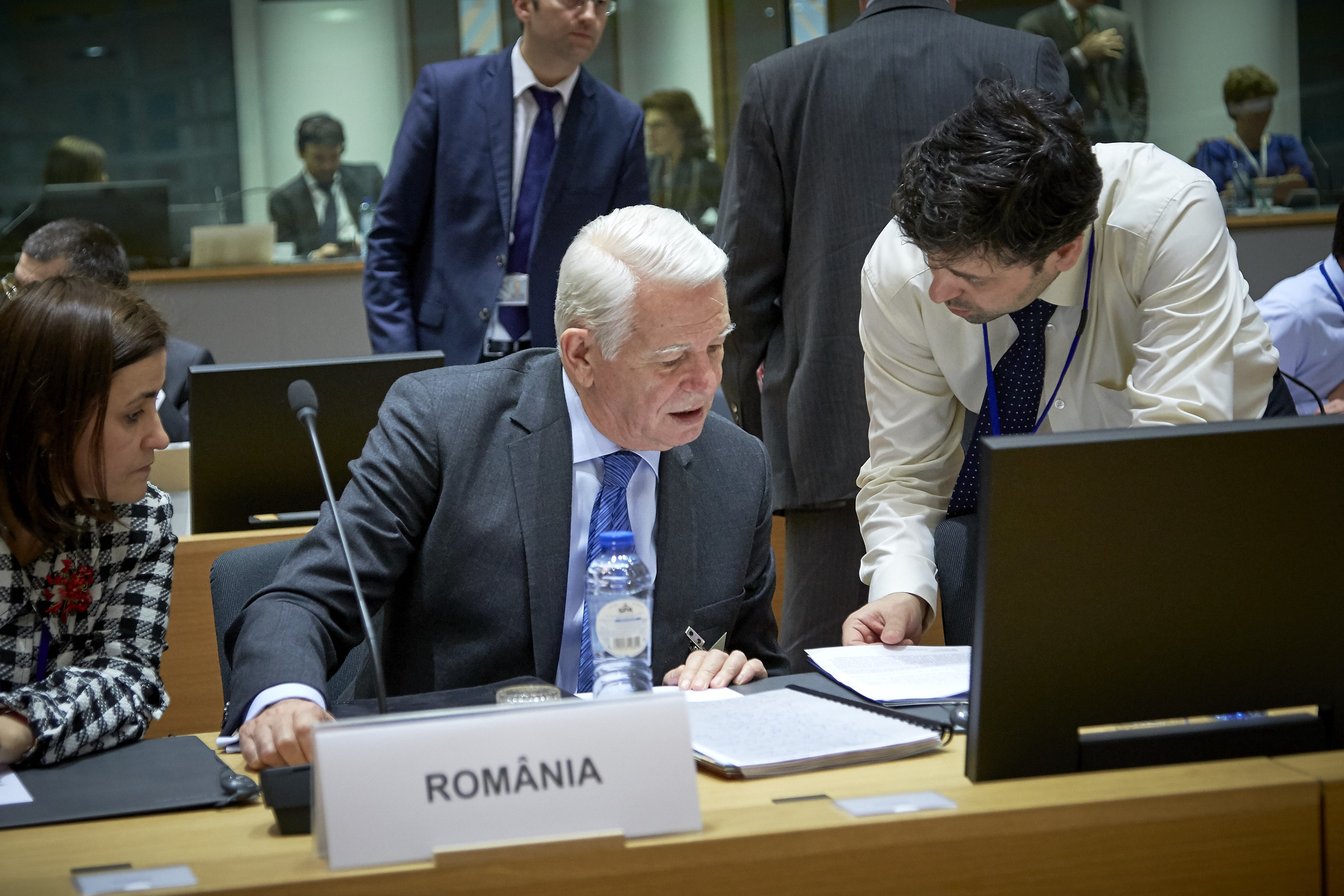 Interview with Teodor Meleșcanu, Romanian Minister of Foreign Affairs. We spoke on the Romania’s position on Kosovo, European integration process of Serbia, Romanian minority in Serbia, as well as on coooperation between Serbia and Romania.

Teodor Meleșcanu: Romania is a strong supporter of Serbia’s accession to the EU. Last year Romania supported the opening of the most difficult and complex chapters – chapter 23, Justice and Fundamental Rights and chapter 24 – Freedom and Security – which are essential for the entire dynamics of the EU accession process of Serbia.

We constantly express our openness to provide Serbia with any necessary support, based on our own experience in accession negotiations, in all areas where our assistance will be considered as useful.

Regarding the sensitive issues for our country – rights of persons belonging to Romanian minority throughout Serbia to education and mass media in mother tongue, use of minority languages – in this case Romanian – in administration, under Serbian legislation and European standards in this field and access of religious service in mother tongue – we expect visible progress.

We strongly believe the Joint Committee on national minorities is the most adequate framework of dialogue, in order to find practical solutions to the specific problems of our kin minorities. It is in the spirit of good neighborliness, friendly relations and cooperation between our states to consolidate this working mechanism. Therefore, we express our full commitment to resuming bilateral talks within the Joint Committee on national minorities.

EWB: Serbia and Romania are planning to build a highway from Belgrade to Timisoara. However, the request for financing from the EU for that project is currently stalled. What did actually happen?

TM: Serbia and Romania agreed to apply for a feasibility study on the construction of an expressway between Timișoara and Pančevo, due to be financed under the IPA-CBC framework.  The launching of this feasibility study, including its financing, has encountered some technical difficulties.

We remain committed to such projects, which are designated for improving the connectivity between our states and I can assure you that both myself personally, as well as the Ministry of Foreign Affairs, are ready to provide all necessary political support to bring our countries closer and strengthen our bilateral relations, turning common projects into reality.

EWB: You met the Serbian ministry of foreign affairs Ivica Dačić at the Organization of the Black Sea Economic Cooperation (BSEC) Summit in Istanbul last week. What is the best field for improving the cooperation not only between Serbia and Romania, but also among all countries, which are the members of the BSEC?

TM: The fortunate positions of our countries on the region’s map provide us with ample prospects to ensure that our countries become the main entry points to other regions. And there is a substantial potential for trade growth in sight – for example, Caucasus, Central Asia, Middle East – that can build on the connectivity components in energy and transport infrastructure among regions. The Black Sea region holds great investment opportunities for infrastructure development, including in the energy transport and/or production. Not the least, turning the Black Sea into a region of peace, stability and prosperity is of critical importance to Romania. This generous goal is enshrined in the BSEC Charter and provides the normative setting for the values we should all promote and protect.

EWB: You suggested the organization of a trilateral meeting between Serbia, Romania and Bulgaria. What would be the agenda of that meeting?

TM: We are promoting regional security and regional economic development, including interconnectivity, as topics of shared interest on the agenda. We will also focus on the situation of the region, its security and stability, as well as on opportunities of pursuing a dynamic cooperation for developing and implementing those projects selected as PCIs (projects of common interest) by the European Commission.

EWB: The Serbian Prime Minister Vučić had repeated on multiple occasions that he expects Romania to be “the best Serbian lawyer in Brussels”. Can Serbia expect this Romanian government to be its support on the path to the EU membership as it had been the case with the previous one?

TM: Romania is consistently committed towards a close cooperation with Serbia and actively supports Serbia’s EU accession process, both at political and at technical level. In this respect, we will continue to implement the Joint Statement regarding Romania’s support for the European integration of the Republic of Serbia. We should all agree, however, that the set of standards and values a future EU member state has to abide by is a key benchmark, which will take serious efforts and hard work to fulfil. Romania stands ready to grant Serbia any kind of assistance it may require on this difficult path.

As a staunch advocate of the enlargement policy, more than ever, in a context marked by many challenges, we reaffirm our unequivocal commitment towards continuing the enlargement policy as a strategic priority for the EU. Romania was and remains fully committed towards a close relation with Serbia and will continue to actively support its EU accession process.

We appreciate the role that Serbia plays for the stability of the region and its positive contribution for cooperation and reconciliation. Both Romania and Serbia have interests in a secure, stable and prosperous Balkan region and we are directly interested in further continuing to cooperate on this path.

We see Serbia, our neighbor and close friend, as part of the European future. The EU remains open to those European countries that respect our values and are committed to promoting them, as the Rome declaration of 25 March positively conveyed it.

As a country with a recent history in the EU, as this year we are celebrating 10 years since the accession, we understand very well the huge, intense and difficult efforts that such a country project involves. EU integration process has an enormous transformative power over each component of the society. It covers the rule of law, economic governance and administrative reform. All these fundamentals are meant to make changes that will bring tangible results for their true beneficiaries who are the Serbian citizens. Together in the EU means more stability and prosperity for the whole region.

The presence of the Romanian and Serbian communities in the two countries has a connecting role, which clearly contributes to the intensification of cooperation between our countries. The process of the EU accession negotiations is rigorous in its conditionalities, and, therefore, we are prepared to offer our lessons learned and to share our expertise, taking into considerations the advantage of geographical proximity and the similarity of the changes that our society has recently undergone.

The bilateral declaration for the cooperation on the European Affairs, concluded last year, is a clear expression of our country’s readiness for concrete assistance all the more Serbia already has opened eight chapters and provisionally closed two other negotiation chapters. The last Accession Conference took place on 27 February this year and we clearly support the Maltese Presidency to maintain the positive momentum of this process by opening toward the end of June further new chapters of negotiations in order to bring the positive effects of the accession process even closer to the citizens of the Republic of Serbia.

EWB: Romania celebrated the ten-year anniversary of becoming a member of the EU. What should Serbia learn from the Romanian experience in that process?

TM: Romania’s accession to the EU in 2007 symbolized the accomplishment of a major national project that has drawn the consensus and resolute support of the entire political class and the Romanian society as a whole. The expectations within the Romanian society revolved around the need for a return to the logic of prosperity and stability, in a democratic community, which upholds the founding principles and values ​​of the European project. Romania experienced a remarkable process of reforms and continues to undertake efforts in this direction. Thanks to its endeavors as an EU and NATO member state, Romania has today a consolidated, predictable and trustworthy European profile, with a stable economy and a society whose level of transformation has become noteworthy and appreciated.

The European integration is a complex political, social and economic process, but fortunately, the phases and requirements for a EU accession are extremely clear and within reach. It involves the attainment, implementation and observance of rules and principles on which institutions should function, as well as of requirements in the economic and social fields. All of these undertakings contribute to the strengthening of the public institutions, consolidation of democracy and the rule of law, developing a well-functioning market economy and, consequently, to ensuring prosperity of the society.

At the same time, one should note that while the accession process is a predictable one that rewards results – provided that reforms are genuine and visible – EU membership does not represent the culmination of the process, but rather the beginning of efforts towards ensuring sustainability. That is why a credible process of reforms is one that is constantly endorsed by decision-makers and carried out for the benefit of the citizens. I am confident that Serbia is on the right path to achieving these objectives and joining the European family in the near future.

EWB: Romania is one of the five EU countries which has not recognized Kosovo yet. However, there were some indications that Romania could change its opinion. Will this Romanian government keep the opinion that Kosovo is not an independent county?

TM: We have stressed from the beginning of the “standards and status” process that a lasting solution in this file has to be based on the provisions of international law. That means that either the parties will agree on the future status of the province, or there will be a UNSC resolution eventually replacing 1244, therefore putting in place new provisions on the status. None of these conditions has been yet fulfilled. One of the most important evolutions since the Unilateral Declaration of Independence was the beginning and the subsequent evolution of the Belgrade – Pristina Dialogue, an EU facilitated process, that followed an UN General Assembly resolution co-sponsored by Serbia and the EU Member States. This process – the Dialogue – had notable results, accords and agreements that need to be implemented by both sides. That will lead to each party’s progress towards the EU, an objective approached in a status neutral manner by the EU, taking into consideration the unchanging fact that 5 EU MS do not recognize Kosovo.

Macedonia the leader in the Western Balkans

Instead of Enlargement, "Restern Balkans" in Consolidation

BiEPAG in EP: The Crisis of Democracy in the Western Balkans – Authoritarianism and EU Stabilitocracy