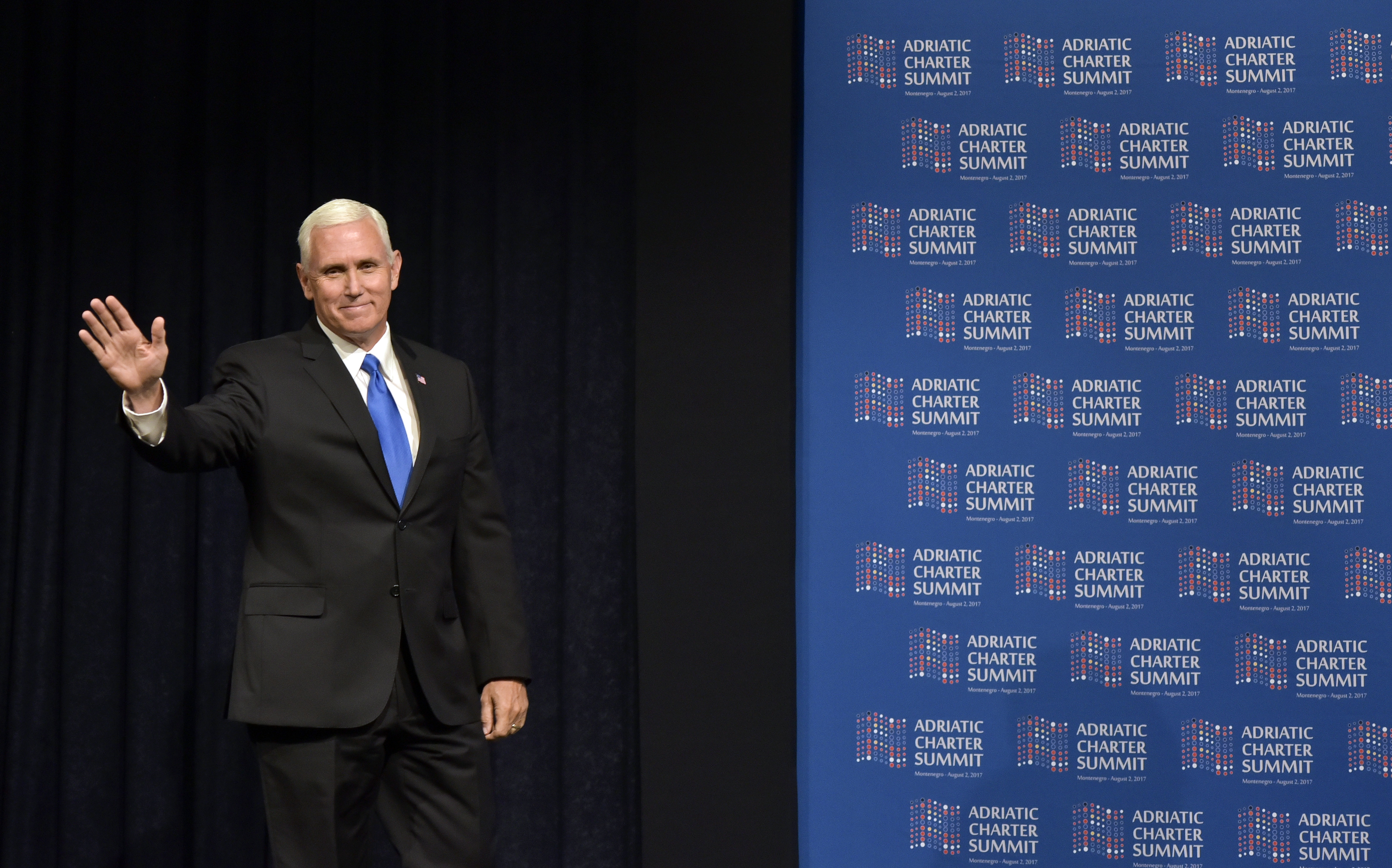 PODGORICA – United States Vice President Michael ‘Mike’ Pence visited Podgorica and has met with Western Balkan leaders during his European tour. Before Montenegro, he also visited Estonia and Georgia, three countries in total for his four days of official visits. Pence’s visit to Podgorica is seen by commentators and the media as a show of U.S. support after Montenegro’s entrance into NATO. Pence is the highest-ranking American official in a century to visit Montenegro.

In Podgorica, Montenegro, Mike Pence started his diplomatic mission by meeting with Montenegrin President Filip Vujanović and Prime Minister Duško Marković. During his speeches to the press core, he underlined the firm commitement of US President Donald Trump to the Balkans and to the NATO members. During the gala dinner Pence stated that “(Montenegrin) courage, particularly in the face of Russian pressure, inspires the world and I commend you for that” and has expressed the United States’ steadfast support for Montenegro, the newest NATO member.

During the second day of his visit he has also participated with leaders from across the Western Balkans in an Adriatic Charter Summit – a gathering that besides USA also brings together leaders from Albania, Bosnia-Herzegovina, Croatia, Macedonia, Kosovo, Serbia, and Slovenia (with Serbia and Kosovo being observers). Officially titled “American-Adriatic Charter on Partnership”, it has the goal of continuing the multilateral defence cooperation and NATO admission efforts. The hosts of the conference were Montenegro and Macedonia, so the current Macedonian Prime Minister opened the meeting welcoming the “lasting cooperation (through Adriatic Charter) that contributes to democratic processes in the region”. Serbian Prime Minister Ana Brnabić said at the meeting that Serbia is a military neutral country, which is also a responsible, predictable and reliable NATO partner, and which fully respects its neighbors’ commitment to their membership in the Alliance.

Pence has once more in his speech accused Russia of trying to divide the region, undermine integration processes and draw new borders by force. These words allude to the unsuccessful and still unresolved failed coup attempt which happened during the last Parliamentary elections in Montenegro, which was allegedly organized by Russian agents. Russia has denied any involvement in the alleged plot to overthrow the Montenegrin government, but the West says Russia is increasingly engaged in the former Yugoslavia, through soft power and intelligence operations.

Messages sent by the Vice President of the US during the summit were estimated by the regional officials to confirm that the Western Balkans remains in the focus of Washington. The head of the Council of Ministers of Bosnia and Herzegovina, Denis Zvizdić, said that the region needed cooperation and integration, stating that “these words were most frequently used at the summit”, Montenegrin Foreign Minister Srđan Darmanović added that today’s meeting sent strong messages of unity over integration goals in the region and Kosovo President Hashim Thaci expressed hope that Kosovo will quickly become a member of the Adriatic Charter.

Referring to their sources, Podgorica’s daily Vijesti reported that Pence has met with opposition party leaders Aleksa Bečić (Democrats), Miodrag Lekić (Demos), Ranko Krivokapić (SDP) and Dritan Abazović (URA), and the Vice President of the Socialist People’s Party Danijela Pavićević, whom he urged to finish the boycott of the Assembly to carry out their responsibilities as legislators and represent the voters who elected them. This meeting was not previously and officially announced. Michael Pence did not meet with President of the Democratic Party of Socialists Milo Đukanović and leaders of the Democratic Front (DF) during his visit to Montenegro.

Slim chances for Serbia’s progress towards the EU by year’s end, relationship with Russia the biggest problem

[EWB Interview] Lajčák: We have to bring EU perspective closer to Western Balkans