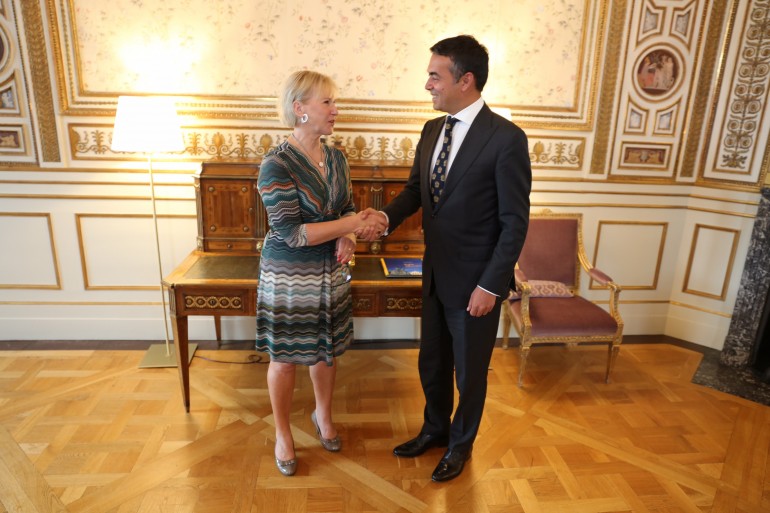 Margot Wallström and Nikola Dimitrov; Photo: Ministry of Foreign Affairs of the Republic of Macedonia

STOCKHOLM – Sweden will continue to supporting the activities of the new Macedonian Government aimed at quickly revitalizing Macedonia’s European perspective and we will increase specific assistance in areas that are most useful for Macedonia’s reform agenda, said Sweden’s Minister of Foreign Affairs, Margot Wallström during a meeting with her Macedonian counterpart Nikola Dimitrov.

Dimitrov is paid an official visit to Sweden, during his regional visit to the Nordic countries.

During talks with his Swedish MFA, Minister Dimitrov underlined the strong determination to return the country to the EU integration by making fundamental reforms in areas of crucial importance and by implementing an open-dialogue policy with all its neighbours based on European values and principles.

Minister Wallström expressed strong and unequivocal support for the activities of the new Macedonian Government and assured that Sweden is genuinely interested in increasing specific assistance in areas that are most useful for Macedonian reform agenda.

The productive meeting of the two ministers resulted in the adoption of a Declaration of Cooperation between the Republic of Macedonia and the Kingdom of Sweden which confirms the Sweden’s support for Macedonian strategic goals and establishes areas of mutual interest for building further specific cooperation.

Osmani: Plan for better use of IPA funds

Quint countries welcome Serbia referendum, call on Pristina to allow it in Kosovo