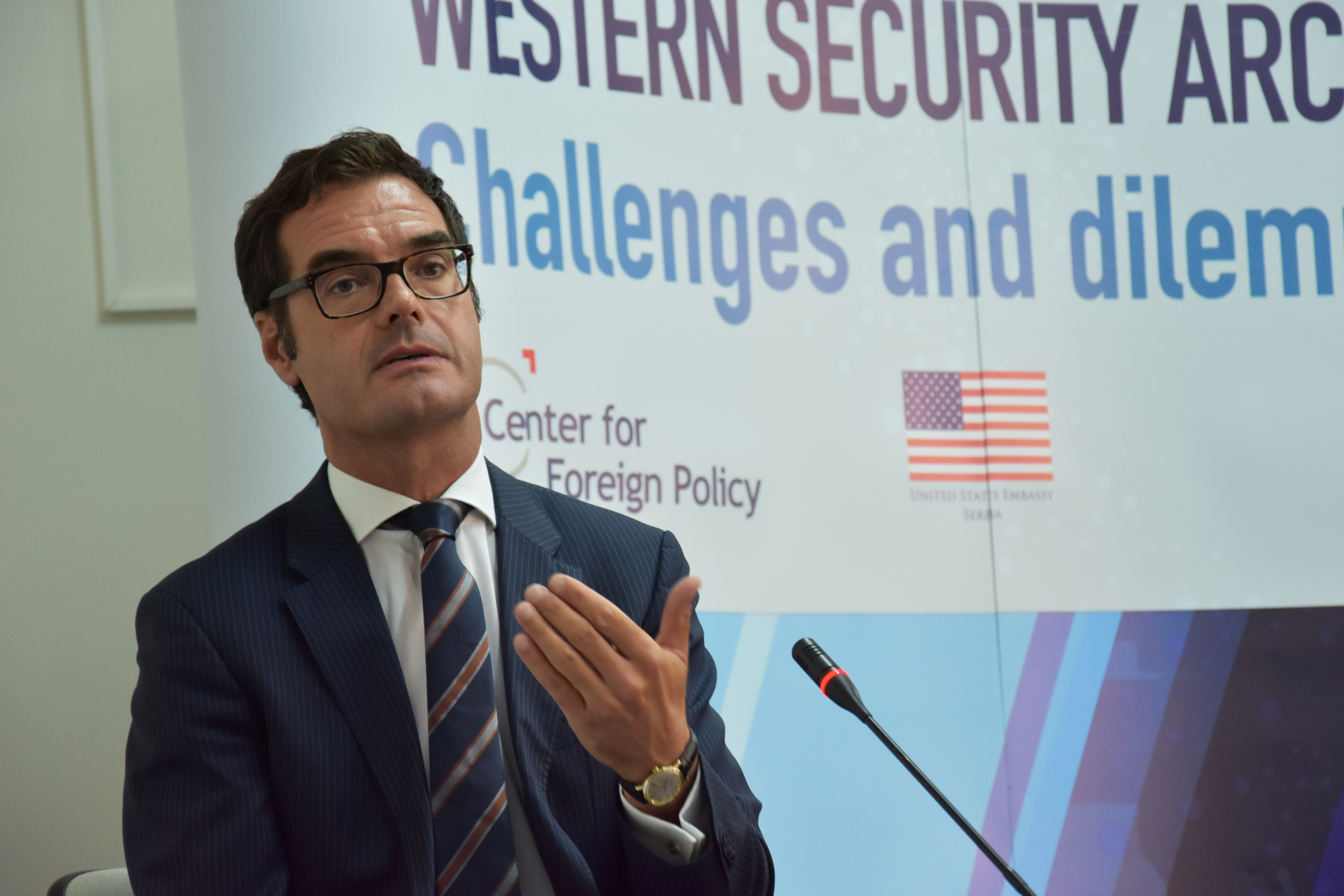 Interview with Knut Kirste, Political Advisor for Serbia at the NATO Political Affairs and Security Policy Division. Kirste was in Belgrade as a speaker on the conference “Western Security Architecture and Serbia – Challenges and Dilemmas”, organized by the Center for Foreign Policy.

European Western Balkans: Two years after signing the IPAP, how do you see its results in strengthening the cooperation between Serbia and NATO? In which fields were the greatest advancements made?

Knut Kirste: NATO and Serbia have come a long way since we started our partnership. Serbia joined the Partnership for Peace (PfP) in 2006. Since then, our cooperation and dialogue have grown.  The Individual Partnership Action Plan (IPAP) that we agreed in January 2015 is an important tool, as it helps to structure and organize our bilateral cooperation so that NATO and Allies can support Serbia in achieving its reform goals. Our cooperation is focused on areas where Serbia wants to cooperate with NATO and where NATO can bring added value, including for instance the reform of national security forces and institutions and security-related scientific cooperation.

During this period, we used the IPAP framework to enhance our practical cooperation and our political dialogue at all levels. Last November, the then Prime Minister – and now President – Vučić visited NATO Headquarters. During his visit he had a very good meeting with all of the NATO Allies Ambassadors sitting at the North Atlantic Council. We expect him back at NATO Headquarters later this year. Secretary General Stoltenberg is proud of his strong bond of friendship with Serbia. He had a productive visit to Belgrade in 2015. NATO is indeed very pleased with the progress that has been achieved so far and through our office here in Belgrade we will continue facilitating full implementation of the IPAP, further strengthening our practical cooperation and political dialogue.

EWB: What do you see as the main areas where Serbia and NATO have potential for future cooperation?

KK: NATO and Serbia are already cooperating in different areas, including the reform of national security forces and institutions, security-related scientific cooperation, and public diplomacy. Having said that, I see a lot of potential for stronger practical and political engagement. NATO is open to this effect but it is primarily and ultimately up to Serbia to define for itself which direction our partnership takes.

We fully respect Serbia’s sovereign choice of military neutrality. This policy does not prevent us from conducting exercises together, including on disaster relief, as well as from working on making military forces interoperable, deepening the cooperation between Serbian scientists and scientists from Allied countries, or sharing strategic assessments.

One aspect where I see the potential for furthering our partrnership regards joint efforts to build more stability in crisis areas. For instance, NATO and Serbia are considering working together on building the capacity of Iraqi military medical personnel. Iraq could definitely benefit from Serbia’s long-standing expertise on military medicine. We also need to work more together in the domain of public information, so that our publics can have a proper understanding about the Alliance and the nature of our partnership and misperceptions can be overcome. Our partnership can grow in ways similar to our cooperative relationship with other neutral countries, such as for instance Sweden, Finland or Austria.

EWB: How do you rate the fulfillment of NATO standards by the Serbian Army? Has there been significant progress in recent years?

KK: I think that the Serbian Armed Forces has improved its level of interoperability significantly, thanks to the army’s participation in the NATO Operational Capabilities Concept. Through this programme, the Alliance sets standards for interoperability and helps partners prepare for international peacekeeping operations. Through NATO, hundreds of Serbian soldiers and officers have received training and attended capacity building course, which today help Serbia to make valuable contributions to UN and EU peacekeeping missions. Our training also helps keeping Serbian personnel safer while they are on such missions.

In addition, NATO and Serbia have more than 100 partnership activities every year. We work together on defense reform and the further strengthening of security structures. NATO assists Serbia with the removal of dangerous surplus ammunition. Our scientists cooperate on finding innovative solutions to common security challenges. For all these reasons, I think that our partnership is solid and I expect it to further develop in the future, based on our joint interests and in accordance with Serbia’s neutral military policy.

EWB: How do you see the importance of Serbia for security in the Western Balkans?

KK: Serbia is an important partner for NATO in the Balkan region and it is key for regional stability. That is why we cooperate with Serbia. Ultimately, our partnership is good for Serbia and it is good for the Alliance. Since the 1990s, NATO has invested much in the Western Balkans and the region is more stable today. This is due not least to our partnership programmes, which have promoted regional cooperation and Euro-Atlantic integration, for those who want it. Over the past decade, Slovenia, Croatia, Albania, and recently Montenegro have chosen to become members of NATO. Slovenia and Croatia have also joined the European Union. Bosnia and Herzegovina and the former Yugoslav Republic of Macedonia[1] have applied for NATO membership. And today, all countries in the region have a clear interest in promoting regional cooperation and stability.

[1] Turkey recognises the Republic of Macedonia with its constitutional name.

The Riga Conference 2017: EU must deliver to regain citizens’ trust