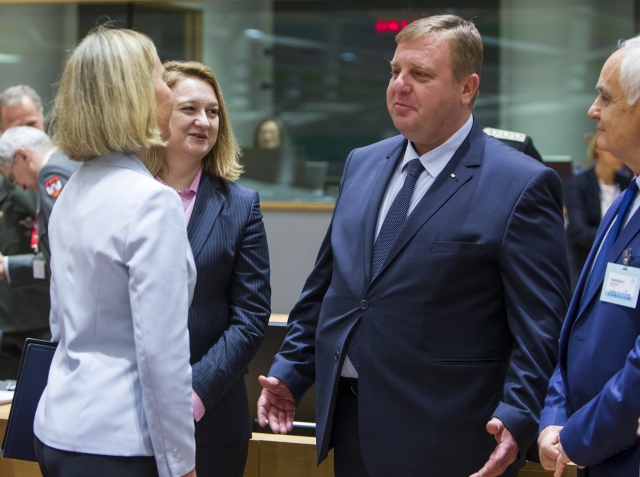 SKOPJE – I want to emphasize, explicitly, in order stop the political speculations – we support the state unity and territorial integrity of Macedonia, said Bulgarian Minister of Defence, Krasimir Karakachanov, after the meeting he had with his Macedonian counterpart and host, Radmila Šekerinska.

He added that Bulgaria do not have a problem with the name of the Republic of Macedonia, since it recognises the country under a constitutional name. We are ready to help resolving the dispute with other countries in order to finally open the doors of Macedonia for full membership in NATO.

In a response to a journalist question whether there will be changes in the ideology and his views regarding the Macedonian minority in Bulgaria after the signing of the Agreement on good neighbourly relations between the two countries, Karakachanov said that the topic is very long and if anyone is interested in the history of the Macedonian question, he could to give “special lessons” as a historian, but, today, he has come to Macedonia as a Minister of Defence.

“I have always thought that we should not think up problems, especially when there aren’t any, there is no such problem in Bulgaria. Here I am in the role of the Minister of Defence. If you want to talk about history, I will speak as a historian. Such topics are not in favour for good relations between the two countries”, he said.

Šekerinska and Karakachanov stressed that today’s meeting, among other things, has been held to show that the agreement signed by the two countries will not remain only in words.

“The agreement and the events after the signing, shows that the two countries are aware that only through good neighbourly relations our region can move forward and guarantee our mutual security”, said Šekerinska.

Zaev-Borisov: We are pushing the region forward