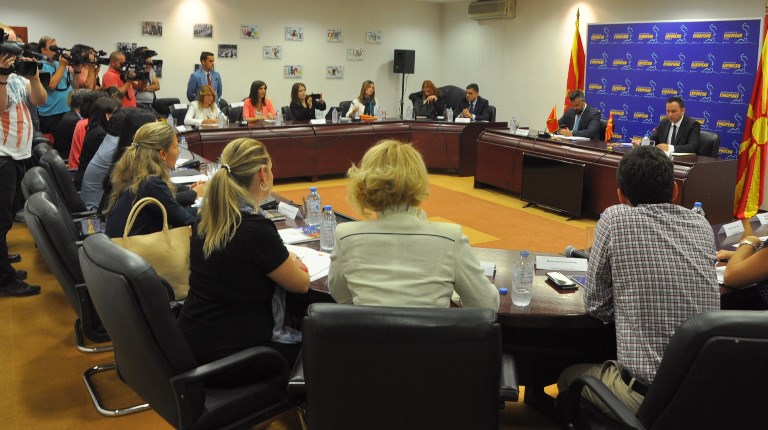 Aleksandar Andrija Pejović and Bujar Osmani: Photo: Government of the Republic of Macedonia

SKOPJE – Deputy Prime Minister for European Affairs Bujar Osmani hosted the Third Joint Committee of the Republic of Macedonia and Montenegro, which was held in Skopje. High-level delegation from Montenegro led by the Minister for European Affairs and chief negotiator of Montenegro in the negotiations with the EU, Aleksandar Andrija Pejović. The meeting was held within the Cooperation agreement between the two governments in the European integration process.

Osmani expressed satisfaction with the continued cooperation between the two countries, especially the fact that through this Joint Committee, a basis for exchange of experiences and gained knowledge was established, which have a strong influence on the promotion of the European integration processes of the entire region.

“Macedonia, for example, first in the region joined the Stabilisation and Association Process as early as 2001, and in the coming period, it has made strong progress in joining the EU. We shared our experiences with all the countries in the region at that time, among which, of course, with Montenegro. Today, once we have passed a long period of lagging in the progress towards the EU, Montenegro’s experience, as a country that has started and successfully progressed in the negotiations with the EU, is undoubtedly an important benefit for both Macedonia and other aspirant countries from the region”, Osmani stressed, before the beginning of the meeting.

“Progress in the Euro-integration processes of Macedonia, fortunately, does not represent an isolated case in the Balkans, but is in the same direction with the new wave of regional European optimism, which is extended to the EU member states. This progress is particularly noticeable in Montenegro, which besides the start of negotiations with the EU, became a full member of NATO. This is a good basis for both our and the overall regional progress, but of course, it is very important for us that on this road we have the support of our country friends, as we consider the support of Montenegro,” concluded Osmani.

Prior to this meeting of the Joint Committee between Macedonia and Montenegro, two such meetings were held so far, the first being held in Skopje, while the second was held last year in Bar, Montenegro. The purpose of these meetings is to exchange experiences between the two countries on the European integration process.

A Better Region Starts With You(th)