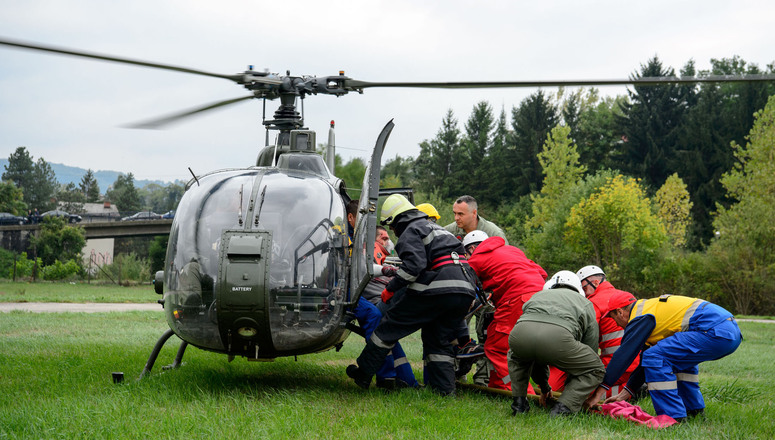 TUZLA – Disaster response personnel from 34 NATO and partner countries gathered in Tuzla, Bosnia and Herzegovina, on Monday for this year’s exercise of the Euro-Atlantic Disaster Response Coordination Centre (EADRCC).

The exercise was opened by NATO Assistant Secretary General for Emerging Security Challenges, Sorin Ducaru, and the Minister of Security of Bosnia and Herzegovina, Dragan Mektić.

“This exercise will help improve international cooperation in countries ranging from Spain to Serbia, from Bulgaria to Belarus and from Croatia to Pakistan”, said Ducaru.

“It will give responders the opportunity to test state-of-the-art technologies in relief operations.”

In the next five days, around 1200 participants from NATO and partner countries will test international cooperation and interoperability in disaster response, including water rescue and chemical, biological, radiological and nuclear (CBRN) detection, protection and decontamination.

The exercise will provide the opportunity to test and employ projects supported by the NATO Science for Peace (SPS) Programme. These include a capacity building project in the field of emergency response in the Western Balkans, the “Next Generation Incident Command System,” and a telemedicine system to increase medical support in disaster-affected areas by remotely engaging medical experts from assisting nations.

Several international organisations and NGOs will also be involved in the exercise, including the United Nations Office for the Coordination of Humanitarian Affairs (OCHA), the European Union, the NGO Save the Children and the Red Cross Society of Bosnia and Herzegovina.

“In short, this exercise will demonstrate the real value of NATO’s network of partnerships”, said Ducaru.

This is the 17th international field exercise organised by the Euro-Atlantic Disaster Coordination Centre (EADRCC) and the first one hosted by Bosnia and Herzegovina.