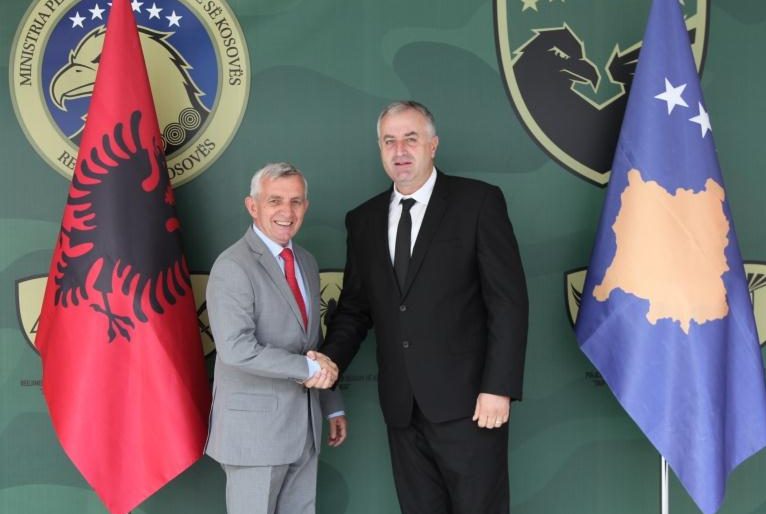 Minxhozi and Berisha; Ministry for the Kosovo Security Forces

PRISTINA -The cooperation between the Ministry for Kosovo Security Forces and Albania’s Ministry of Defence will increase further especially in the field of education, training and joint exercises between Albania and Kosovo armies, said today Minister of Kosovo Security Force Rrustem Berisha.

During a working meeting with ambassador of Albania in Pristina Qemal Minxhozi, Berisha expressed grateful thanks to Albania’s Minister of Defence Olta Xhaçka for the warm hospitality during his Albanian visit.

Further on, Berisha said that, “Kosovo and Kosovo Security Forces expect Albania’s commitment to include Kosovo into the regional initiatives of security which with its experience would help even in the field of Euro-Atlantic integration.”

Berisha acquainted Minxhozi with the transformation process of Kosovo Security Forces into Kosovo Armed Forces, a process which, as he put it, requires engagement of the internal relevant factors in cooperation with the strategic partners of Kosovo.

Minxhozi emphasized that Albania is ready to deepen cooperation in the field of security between Albania’s Ministry of Defence and Ministry for Kosovo Security Forces as well as in all the fields of mutual interest to the benefit of security of our two countries, the region and beyond.

At the end of the meeting, Minxhozi announced the upcoming visit of Xhaçka to Kosovo in November.