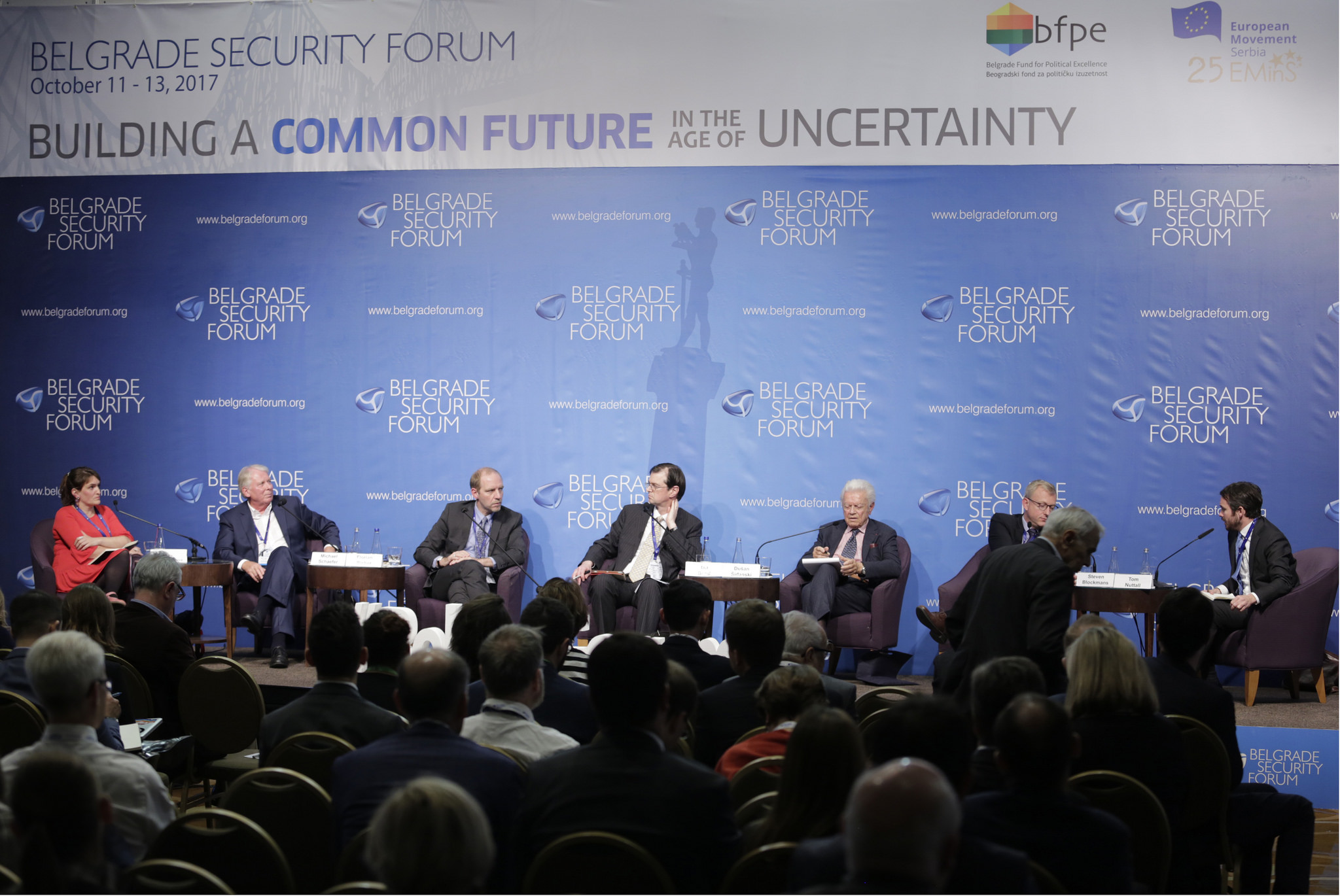 BELGRADE – European Security and Crisis Management, Quo vadis, Europe? New paradigm after Rome, Migration in 2017, were some of the topics which were discussed today, at the beginning of the 7th Belgrade Security Forum.

It was opened with a welcoming speech by Director of the Belgrade Centre for Security Policy, Sonja Stojanović Gajić.

“This year’s Forum is happening in the period when it seems that there is an increase of unpredictability in the world. Our goal is to offer hope and try to show that some of the issues can be resolved or at least be disassembled to more simple tasks,” she explained.

The Academic part of BSF begun with the topic European Security and Crisis Management Since 2003: Is the CSDP Fit For Purpose?.

The Keynote Speech was held by Michael Smith from the University of Aberdee.

He stressed that there was no real defence policy in the CSDP.

“The CSDP inherited the functions of the Western European Union. If we compare it to the NATO, CSDP cannot replace it, but it is seen as a useful backup to the NATO. When it comes to the security component it has been developed as a reaction to Yugoslavia’s breakdown and from a desire to adequately react to it,” he explained.

This panel was followed by the session called “The EU as a civil-military crisis manager”, where the panellists discussed the EU conflict prevention and peace-building.

“There is a lack of USA leadership, a collapse of unilateralism and lack of efficient crisis management, while it is still questionable who will take over the leadership in peacebuilding: EU, UN or some other actor,” Feith explained.

Gabriella Vogelaar from the Global Partnership for the Prevention of Armed Conflict said that civil and military component is not enough, she stressed, a vast of grey zone exists which is not regulated adequately.

The EU’s comprehensive approach to security through examinations of the EU engagements in the Western Balkans, the Horn of Africa, North Africa, the Middle East, the Mediterranean Sea and in the Belgrade-Pristina dialogue was discussed on the following panel “The EU as a comprehensive crisis manager”.

Peter Horne Zardsdah from Roskilde University, presented the findings of his paper which focused on the Balkans and the Horn of Africa where he compared the situation in Kosovo to the one in Somalia. When asked about the EU’s strategy, he stated that problems only arose when there had been a discontinuity between the strategy and the delivery.

Nikola Tomić from University College Dublin had a somewhat minimalist view on the matter stating that the EU did not achieve much but it did achieve something.

“There need to be some guidelines, but to define it means to limit it,” Tomić explained.

On the last academic panel named “The EU as a crisis management actor: CSDP in the neighbourhood”, panellists analysed the EU missions in Kosovo, Bosnia and Herzegovina, Somalia and the Occupied Palestinian Territories.

Annemarie Peen Rodt from the Institute for Strategy, Royal Danish Defence College, listed two opportunities for the EU to invest in trying to identify what could work and what could not: on being regional security and the other crisis response.

“There are two EU perspective, internal and external, which as a whole explain the range of tools and different types of engagement in the conflicts,” she said adding that the conclusion they reached regarding Western Balkans and Horn of Africa, is that they have similar tendencies of development, similar problem roots and causes, but very different intensity of violence development.

Ivana Boštijančič Puklo from the Centre for European Perspective argued that CSDP is positioned very low on the agenda of EU member states. She emphasized that our expectations should be discussed, as the structures and processes are working well but are at the same time rather slow. For instance, she explained, EULEX is perceived as much more NATO-led than EU led.

“EU is simply not made for CSDP. CSDP is very low positioned at the EU priorities agenda,” she concluded.

The first plenary panel named Quo vadis, Europe? New paradigm after Rome, started with the discussion regarding the challenges the EU is facing, such as an increased flow of migrants, poor economy of some Member States, combined with persistent wealth inequality and unemployment.

Florian Bieber, Professor and Director of the Centre for Southeast European Studies at the University of Graz, argued that enlargement by stealth—enlargement negotiations conducted under the radar, focused on technical implementation of the acquis communautaire rather than real political contestation – creates problems for enlargement’s future success.

He called for Europe to re-politicize the process of integration, and of governance, by affirming the EU’s core values and condemning anti-Semitism, and civil liberty violations in countries like Hungary and Poland.

“The lesson? In order to flourish the EU must be a political union, not simply a technical or economic one,” stated Bieber.

Ian Bond, Director of Foreign Policy at Centre for European Reform, reaffirmed these sentiments, arguing that the crisis to rule of law within EU member states is serious, but cannot be fixed with institutional tinkering.

Steven Blockmans, Senior Research Fellow and Head of EU Foreign Policy Unit, at the Centre for European Policy Studies expressed his lack of pessimism about the current political mood in Europe, admits his fear leading to French elections but seeing a renewed energy for bolstering European cooperation.

On the session “A crisis of values or management: Migration in 2017”, it was discussed what are the lessons learned for Europe and the member states in managing the migration crisis, but also what is the alternative to the current deterrence policies implemented to keep immigrants away from Europe.