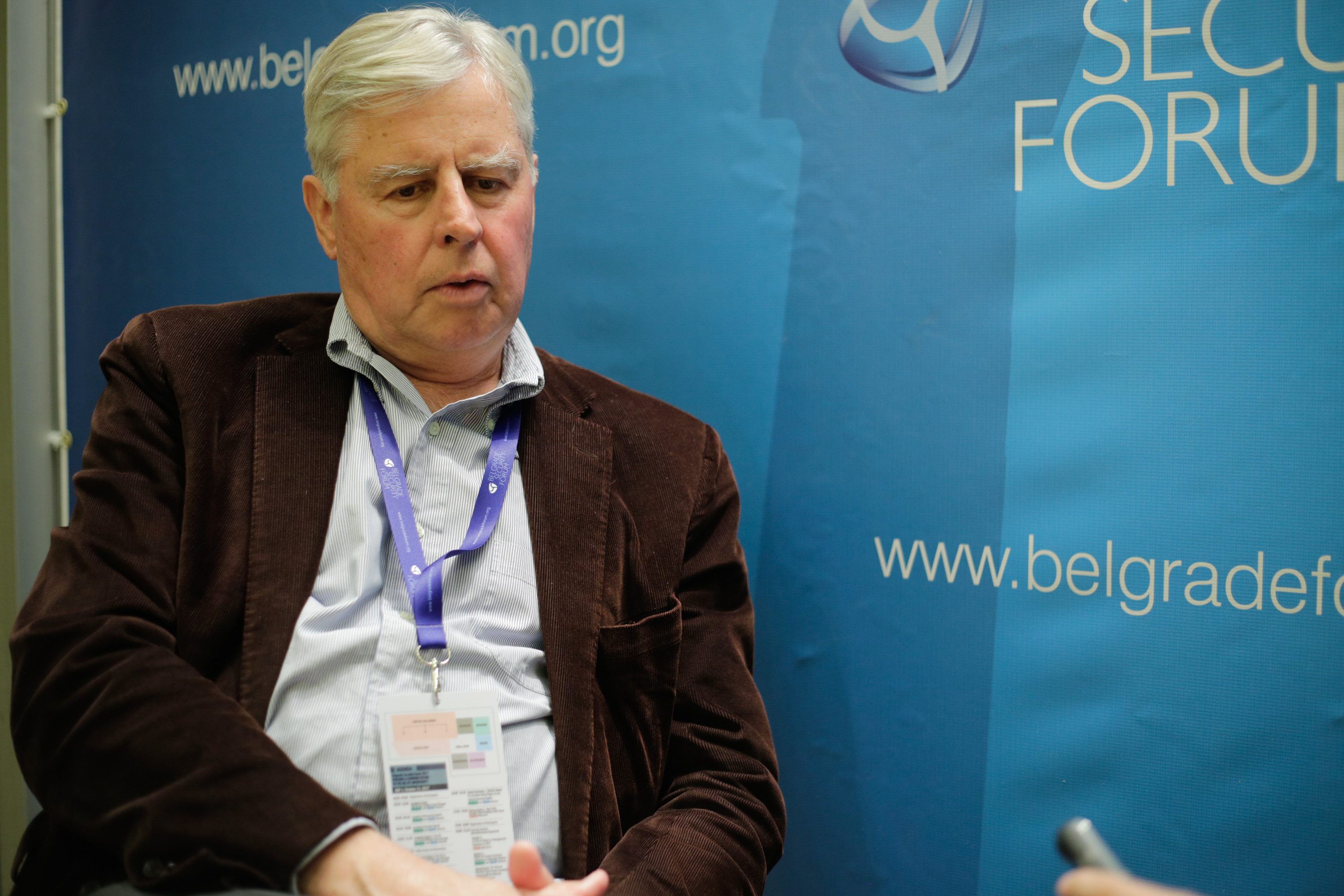 Interview with Pieter Feith, Dutch diplomat and the former European Union Special Representative in Kosovo (2008-2011) and the International Civilian Representative for Kosovo (2008-2012). The interview was conducted at the Belgrade Security Forum 2017, which takes place on 11-13 October and where Feith was the speaker on the panel “The EU as a civil-military crisis manager”.

European Western Balkans: In February next year it will be ten years since Kosovo declared its independence. How do you see this whole period – have the things evolved the way you had imagined or there have been some surprises, positive or negative ones?

Pieter Feith: I need to elaborate on that a bit. This is not a question that I can deal with in a few sentences. I remember when we reached the point of January 2008 that Solana took me aside – back then Solana was the EU High Representative – and said: “Pieter, are you absolutely sure you want to do this?” And I said, well, this is highly problematic, because at that point it became clear that this was not going to be a smooth operation, that it hugely got reversal, that Serbia would not agree with unilateral declaration of independence and we all knew that secession, as we see it today with Catalonia, is a very traumatic experience, not only for states but also for people who were at risk of being separated.

But I also thought that, given the fact that large capitals had agreed on me being the international representative to supervise the initial four years of independence, that it would be very difficult to step out of it. Then, it became clear in the four years that I worked in Kosovo that Serbia was not willing at all, at none of the various levels of interaction, to deal with me, to cooperate with my office, and to look at solutions for the problem that happened. I am saying this not in a critical way, but as an objective fact.

In fact, these few years became very difficult and certainly the year 2008 was painful. I was very isolated, also because five member states were not in agreement and did not recognize Kosovo, and I had to improvise. So, that was painful but I tried to manage as best as I could.

Then came another problem, that is, that Kosovars disappointed me on various points. The rule of law, which we have heard so much of did not strengthen as much as Kosovars had committed themselves to. The Rule of law mission was sent to Kosovo of 200 experts, a huge operation, but they did not achieve the objectives that I had in mind and that the European Union had said. Until this very day, the main criminal top-level figures, who happen to be also in or out of the government, have not be indicted, have not been sentenced, and I think this is a failure of the international community and of the European Union.

So this is not a happy episode, though I could conclude the four years and this was appreciated by the capitals. And we did not overstay the length of our mandate, so after four years we closed the mission. Then came the period of the dialogue, but the dialogue has not yielded the results that I had wished for.

EWB: From this perspective, do you think that unilateral declaration of independence was a mistake and could there be some other option, some other way to solve the status issue?

PF: This is exactly the point and I followed the developments very closely. You must be aware that during the three years before the unilateral declaration of independence, from 2005 onwards, the issue on the status of Kosovo was on the top of the agenda and all the capitals consulted with each other, negotiated with Moscow, negotiated with Belgrade, and, unfortunately, by the end of a long process, the conclusion was that there was no alternative to independence.

I think this decision was not taken light-hearted, particularly by European capitals, but you should also remember that, for instance, in the year as late as 2006, maybe even 2007, Russia was in agreement on a set of principles with other Western capitals and these principles were, for instance, that Kosovo should not be divided, that Kosovo should not be allowed to join Albania and form greater Albania, and that it was not realistic to expect that Kosovo could return to the Serb sovereignty, given the years of oppression of the Milošević era. So Moscow did join and then they stepped out of it, so the issue became more defensive among the members of the Security Council because Russia took a separate line to support Belgrade.

EWB: You mentioned the EU facilitated dialogue between Belgrade and Pristina. How do you rate the progress achieved in this process and do you believe it was a largely successful process even with all the flaws taken into account?

PF: It was advertised by Brussels and by Lady Ashton as a great success, and in many ways, initially, there were some important results, like for instance border management, and the opening of the borders to a certain extent was an improvement. But, in my view, the dialogue was flawed and it was conducted with a large amount of confidentiality, secrecy, to the point that me and my successor were not informed at all about the terms of the negotiations.

It was conducted top-down from Brussels, and I think the mistake that was made was that no attempt was made to explain bottom-up to the people in Kosovo and, to a large extent, also in Serbia, what the objective of the dialogue was. Now you must know that the Kosovo society is paranoic and years of oppression caused an enormous amount of mistrust, not only against Serbia but against elites, the international community, etc. All of this, the uncertainty, the sense of insecurity that they were going to be swallowed up again by Serbia, led to a massive polarization in society and it has continued until today.

It has become irrational in Kosovo to discuss the dialogue, as they see it purely in terms of the zero-sum game. In other words, if they would make a concession, that would necessarily be an advantage to Serbia. So they would not see it as a leveled playing field where both sides could make gains.

PF: The EU should help the organizations, maybe the non-governmental organizations, but also the representatives in Kosovo, to explain to the people what the dialogue is about, to provide greater transparency, to discuss with Kosovo opinion leaders and perhaps also with the representatives of the society in Serbia that this is something where both sides can win and that there is no reason to believe that the dialogue should lead to the unilateral advantage of one side.

That I think is a different approach and will require a sort of creativity, but so far I have not seen that it materializes. Rather, I see that the dialogue is now elevated to the level of the presidents of the two sides. This may be useful, but rather than doing more top-down work, I would like it to be worked also from the bottom-up, through civil society, various organizations, etc.

EWB: Regarding the new Special Tribunal for Kosovo which would be based in the Netherlands and work according to the Kosovo law, what expectations do you have and do you think that it will succeed where the previous attempts to implement transitional justice have failed?

PF: I would hope so. In the last year of my work in Kosovo, I tried to stimulate reconciliation, dealing with the past, the question of compensation for emotional and other material loss and suffering as a result of the conflict. So, if this tribunal can help identify and bring to justice the leaders of operations that amounted to war crimes or serious violations of human rights, I think this would be beneficial not only for Kosovo society but also for the whole region.

I cannot predict how it works, you get an impression as an outsider that it is very bureaucratic and it takes ages before the tribunal is finally going to be in session, but I have good hopes that it can bring those responsible for the violation of human rights to justice and I think this is absolutely necessary.

EWB: Taking everything into account and also the fact that Kosovo is pretty much blocked in its EU integration process, do you think it has an European future at this point?

For Kosovo, there are requirements that have to be fulfilled, the progress needs to be made along the dialogue, the settlement with Montenegro on the border issue – which is not a small problem – but of fundamental importance is that the nexus of corruption, organized crime, and the political elite needs to be broken and that the rule of law needs to be applied more thoroughly by the courts in Kosovo.

[VIDEO] Žbogar: Political parties to carry out the elections without violence and threats

Corruption acceptable for a third of WB citizens, 70% don’t believe it can be reduced

Democracy and the state of emergency in Bosnia and Herzegovina