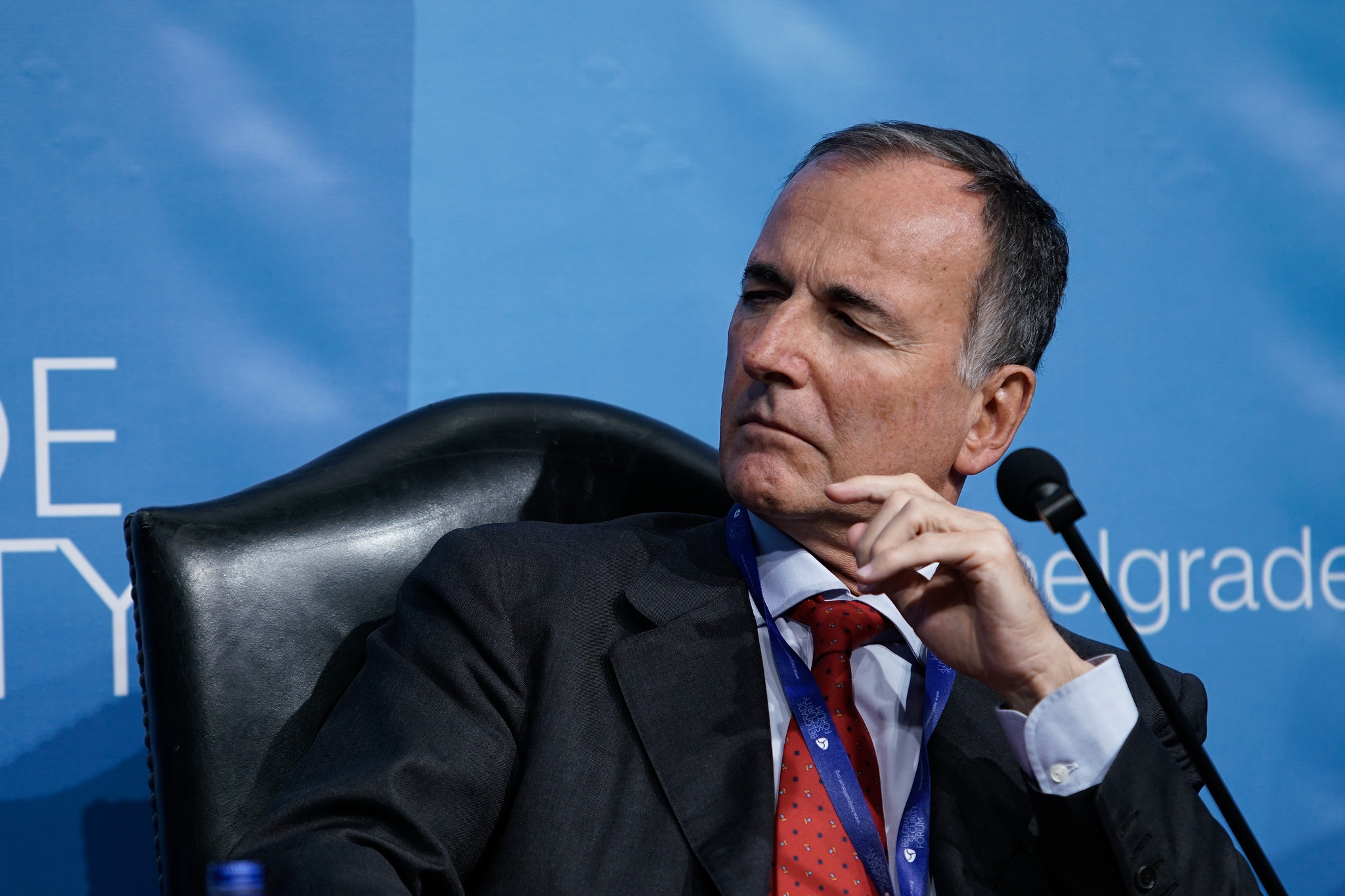 Interview with Franco Frattini, President of the Italian Society for International Organization (SIOI). He served twice as Former Italian Foreign Minister (2002-2004 and 2008-2011), and as Vice- President of the European Commission and Commissioner for Justice, Freedom and Security (2004-2008).

The interview was conducted at the Belgrade Security Forum 2017, which took place on 11-13 October and where Frattini was the speaker at the panel “EU – Balkans: What is our common future?”.

European Western Balkans: President of the European Commission, Jean-Claude Juncker, recently announced that a Strategy will be drawn up according to which Serbia and Montenegro should become members of the EU by 2025. Some believe that it is a very dangerous policy of slowing Montenegro down. What is Italy’s position towards the strategy?

Franco Frattini: My personal position is that it was a quite unfortunate statement. I like President Juncker very much, we have been working together for many years, but if you say 2025, you think about the generation of my grandchildren, so what kind of message are you giving the people of Serbia and Montenegro – you will never become a member of the EU?

Taking too much time means giving up the perspective of becoming one day a full member. Knowing the situation, having been the Vice President of the EU I know that if there is a political will, closing the chapters for Serbia and Montenegro is absolutely possible within two-three years. I would not say by 2020, but 2021 maybe, but otherwise you have to honestly recognise that there is no political will for the moment.

Otherwise, you run the risk to keep on the table an issue which is an issue of raising illusions, and if these illusions come, it would be much worse if the people of the countries in the region realise Europe has been joking with them.

When I opened the doors of Italy for a visa-free regime for the Serbs, they came to Italy and they said – this is the first tangible message coming from the EU and from the founding members of the EU.

Let us avoid talking about dates or let us stick to credible dates. 2025 is not a credible date, it is just a way to say – “unfortunately there is an elargement fatigue”. Do not talk about the next generation, because – who knows how the world will be in 2025.

EWB: What do you consider to be the biggest obstacles on the Western Balkans’ path towards the EU? Some of the EU officials are stating that it might be the rule of law, others, however, state it could be the media freedom. The region experiences incidents of media freedom violations, which bring under attack not just the basic right to freedom of expression, but also the state of democracy in the region.

FF: I do not think that there are obstacles. There are criterea that have to be fulfilled. These are the rules of the game. When the given country is a candidate, in this case Serbia, accept all the criteria. There are 35 chapters that are being negotiated now, some of them are open, some of them are even closed.

I would not talk about the obstacles, I would talk about all those implementing measures that still are missing. I recognise, much has to be done to go through the line of fulfilling all the European criteria, but these are the rules of the game. Media freedom is one of the areas where Europe is particularly attentive and careful, and with the rule of law, also.

There will be by the end of this year in Belgrade a peer review mission sent by Brussels, where there will be for the first time judges and prosecutors coming from a number of European member states, exactly to check the state of play, rule of law, independence of judiciary, fight against organised crime.

Serbian government is perfectly aware that all these measures related to the rule of law, media freedom, fight against corruption have to be implemented. I find here awareness that there are more efforts that are asked from Brussels, but I have to say that all these efforts and these reforms are not good just because they are asked from Brussels. They are good for the people of Serbia, not just because the EU is requesting.

EWB: How do you see the influence of Russia, Turkey and China in the Western Balkans? Just a few day ago Turkish President Erdogan was in Serbia, and during that visit Turkey and Serbia signed 12 agreements in various fields. China is also one of the major investor in the region, we are seeing the growing Russian influence, some might even say attempts to destabilise the region.

FF: I think the government and the President of Serbia are doing exatctly what my country has been doing when I was the foreign minister – attracting the main global players that are of interest. Turkey is for Italy one of the main economic partners. Russia is a strategic partner. China is a one of the main investors in Italy, and rightly so, we have to look at new makets, new perspective of political cooperation. Russia and China are two of the five P5 with veto power in UN Security Council. They are a key members of the international system.

I think that Serbia has been atracting new investments. The same applies for the Gulf States – the huge investment made by the United Arab Emirates is exactly what other countries including Italy have been doing in the recent past – attracting investments.

What is absolutely important it is also a geopolitical bridging role being played by Serbia and Russia. Russia is a needed partner. If you want to adress the stabilisation of Libya or Syria, you have to speak to Russia, not only to the United States. The simple fact, that here in Belgrade the PM, and now President, was able to keep in touch historical ties with Russia is of value for Serbia, because if you want to have stability in this region, you cannot do it against Russia, you have to do it with Russia.

This morning a very interesting discussion took place with PM of Serbia and Deputy Secretary General of NATO, where Serbian PM very rightly said – We will not be members of NATO but we will cooperate with NATO. The Deputy Secretary General said – We are concerned about Russian behaviours but we fully respect the fact that Serbia is keeping historical ties. This is the right approach – mutual respect. President Vučić could not accept others dictating from outside the Serbian foreign policy. I would never be able to accept as a Italian that somebody, even the US, dictate to me what to do and what not to do.

EWB: You are the President of the Italian Society for International Organization (SIOI), an international non-profit organization which is working under the supervision of the Ministry of Foreign Affairs. How would you asses the importance of cooperation between CSOs and the Government, especially in the EU integration process?

FF: It is an important element, because everywhere I was involved in helping candidate states to become members in the case of Croatia, Bulgaria, Romania, CSOs has been considered an important element to help a given country to get closer and closer to membership.

We in Italy consider CSOs as a compomnent of a general system where CSOs play the role of helping integration measures for migrants and refugees, or for example, helping to guarantee the rights of miniorities. Gender miniority rights are also strongly supported from the CSOs. When I look at the situation in Serbia, the situation is very heavily changing towards positive on gender guarantees. For example, when I saw your PM in a first line in a gay pride in a streets of Belgrade I thought how it is a great achievement for your country.

There is a progressve move towards the right direction. We have to help these kind of moves to get farther results. Because the EU apreciates it very much, but again, it is not because of EU, it is because of Serbia. Serbia will be enriched if CSOs will be able to play a bigger role.

EWB: European think-tanks and Balkans experts are referring to “crisis in democracy, authoritarianism and stabilocracy” in some WB countries. Their thesis is that EU is “turning a blind eye” on democracy problems in countries in order to keep stability. In this light, how would you evaluate state of democracy in the WB?

FF: Never has the EU turned the blind eye. There were a moment in recent history where Europe had to compare stability and fighting terrorism versus full guarantees for human rights.

It was the case of the regimes in Libya – Gaddafi, Egypt – Mubarak, in Tunisia – Ben Ali and all these regimes were overtroned by the so-called Arab Spring. In the Balkans, the situation is not comparable. Because when a given country achieves the status of candidate, or the status of a member of NATO, that means there has been a deep scrutiny on the basic conditions also related to the respect of human rights.

The process is not yet finished. Otherewise, Serbia or Albania or Montenegro would have been already members of the EU, which is not yet the case. There is an ongoing process which is moving from the basic greenlight of the situation in a given country to moves ahead to improve. This is the negotiation – it is helping the candidate to achieve the full situation on organised crime fighting, rule of law protection, human rights, which is needed to become a full member.

The difference between a candidate and a full member is that a candadate is the country where there is a basic level of guarantees, but not yet enough to become a full member, otherwise there would be no need to negotiate on 35 different chapters. There is no protection for stabilocracies but there is something to negotiate and something to improve. This is the system of accession.