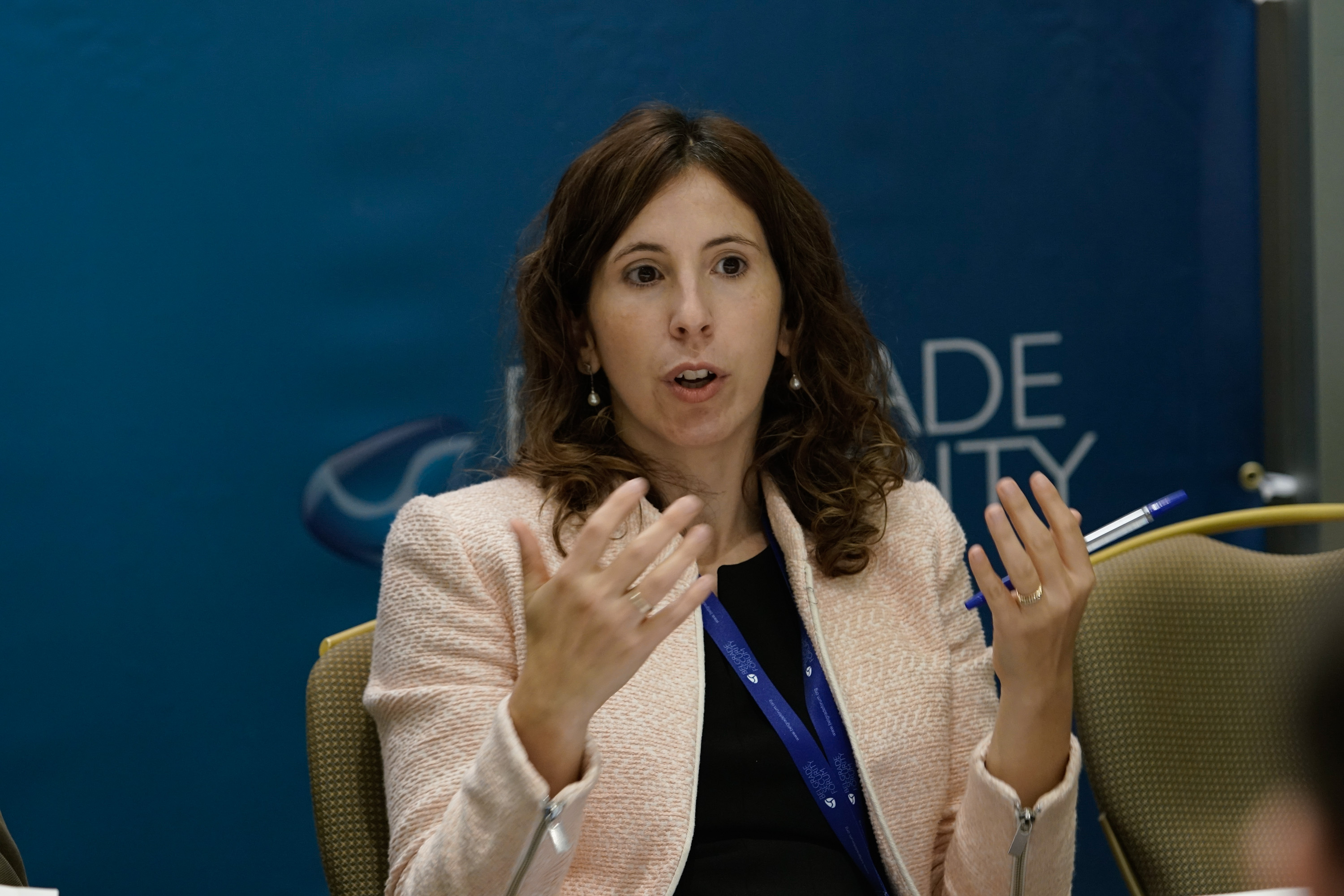 Interview wih Ana E. Juncos, Reader in European Politics at the School of Sociology, Politics and International Studies at the University of Bristol. Juncos was a speaker at the Belgrade Security Forum 2017, which took place on 11-13 October.

European Western Balkans: In the recently published report “Resilience in the Western Balkans” by the European Union Insitute for Security Studies, you wrote about “principled pragmatism” as a policy underlaid by the EU Global Strategy from last year. How would you describe this “principled pragmatism” policy and do you believe it represents a change from the previous period?

Ana Juncos: In the EU’s Global Strategy that was presented by the EU High Representative Federica Mogherini in June 2016, principled pragmatism was identified as one of the new orientations in foreign policy, a new approach to EU foreign policy. There was lot of interest at the time in terms of what changes to the EU’s foreign policy it could bring about, with some observers arguing that this could lead to a much more pragmatic approach, stronger tendencies to support stability instead of democracy promotion.

However, if you look deeper at the EU’s Global Strategy, what it says is that this new principled pragmatism approach tries to balance values and interests. So, this means that the EU does say that it will not leave behind the promotion values, including democracy promotion and rule of law, but it wants to do it in a much more pragmatic way and this is linked to this new idea of resilience.

If you look at the Joint communication of resilience that was presented in June this year, you will also see references to this idea that is trying to bring together values and interests. But resilience is, again, just a way of doing things. The main goal is to promote the EU’s values and those values, if you look at the Joint communication, remain unchanged. They are the ones regarding democracy, human rights and rule of law in the neighborhood specifically, but also beyond the neighborhood.

In essence, principled pragmatism has not changed what the EU is trying to do, particularly in the Western Balkans, and democracy promotion in the region is also emphasized in the new EU’s Global Strategy. It is actually one of the few places where democracy promotion is mentioned, together with some other countries, like Tunisia. This is much more questionable in the countries of Central Asia and the Eastern Neighborhood, where you see more of a nuanced approach and a balance between stability and democracy promotion.

EWB: Now we come to the practice. Many accuse the EU of somehow promoting or enabling “stabilitocracy”, which could be translated as a preference of stability over democracy, or short-term stability over a long-term democratization, which leads to strengthening of the so-called “Balkan strongmen”. Do you believe this to be a manifestation of this principled pragmatism?

AJ: As I said, in theory, or in the rhetoric of the EU’s global strategy, I do not see it being a case in the Western Balkans. In term of what the EU’s Global Strategy says it is clear that promoting democracy and the rule of law in the Western Balkans is a key priority and that this should not be compromised with stability or the support to stabilitocrats as it is usually mentioned.

Practice is much more questionable, not just in the Western Balkans, but also in the other parts of our neighborhood and even within the EU. But if you ask anyone in the External Action Service or in the Commission they will, I think, emphasize the fact that nothing has changed in terms of the principles that guide the EU’s foreign policy in the Western Balkans, and promoting democracy is one of them.

EWB: The enlargement is mentioned in the EU Global strategy as a tool of foreign policy which has a positive, stabilizing effect on the neighborhood. But do you think that the EU has a serious commitment toward enlargement or it is actually the process of enlargement itself that serves the interest of the EU, particularly in the Western Balkans?

AJ: I think it has always been both and I do not think this is a new thing. Enlargement is a tool of dynamism for the EU’s foreign policy, it has been referred to as the most successful foreign policy of the EU. It was the case in the past and still is the case now because of the attraction power that the EU has in this part of the world, but also it serves as a model beyond the Western Balkans and the Eastern Europe. The EU cannot give up on that tool because of what this brings to the EU in terms of soft power, so it obviously has a value for the EU’s foreign policy.

I think there is a commitment there, which was weaker several years ago, especially if you look at the evolution of the speeches of the Commission. But we see a new commitment, particularly from Federica Mogherini and from the Juncker Commission in terms of the support and encouragement. Then, obviously, you have to look at the member states and there you see differences depending on which member states you look at, starting with Germany, which has presented itself as a key leader in the Western Balkans, especially through the Berlin process, but the same commitment is not shared by all member states.

Anyway, in general terms, there is a commitment and I see some kind of a positive move, especially if you compare it to two years ago, because there is more optimism in general in the EU due to recent events and we have seen positive developments in different areas, economic growth, etc. It all has positive repercussions when it comes to the enlargement policy and I have seen some growing commitment in recent months on the part of the EU.

EWB: We have recently heard several announcements or plans for the future of the EU, one by Jean Claude Juncker, another one by President Macron. Is it going to have an impact on the enlargement process?

AJ: It is still early to say if this is going to have an impact, first on the EU itself, and second, on the enlargement process. I think these are positive initiatives that are looking at moving the EU forward, rather than maintaining the pessimism that we had five or seven years ago.

They contribute to creating a sound momentum when it comes to the EU itself and I think this is always positive for the enlargement process, because if the EU is looking at the future it also shows to the countries in the Western Balkans and to the member states that there is a future within the EU, which did not look as rosy two years ago, especially after the Brexit referendum.

The actual engineering of those initiatives in two or three years’ time will be difficult to discern at this time, but I think in general, the momentum we currently have, in terms of moving integration forward, is positive for candidate countries.

EWB: Regarding resilience itself, it is a term which is now widely used in literature, but here in the Western Balkans it is rarely mentioned. There is not even a proper word in the Serbian language to translate it. How do you explain resilience in a few words?

AJ: Resilience is a concept borrowed from engineering and from ecological systems, so it is a not a social science concept per se. Obviously, when you want to translate the concept, it kind of loses the peculiarities that has in other disciplines, but when it comes to using it for social science purposes and, in particular, in terms of political science and international relations, resilience refers to an ability or a quality rather than an end state.

So, it is not about what it will become and what kind of entity it will be, but it is about an ability to transform itself, survive, cope, and withstand internal and external shocks.

There are differences even within the EU as to how people define it, how the Commission defines it, the External Action Service, etc. What is being shared among all of them is this idea that resilience refers to this quality that allows you to adapt, transform, so it has a positive meaning attached to it. I think that something positive that comes with resilience is the idea that we need to look more at local resources and capacities, the drivers of resilience already existing there.

So, resilience is not about fostering, it is about building up from what is already there. It is about talking more closely to the partners in the region to see what is available, what resources are there so that they can be better prepared to prevent and withstand shocks.

BIH at the Crossroads: Membership or Partnership with NATO?