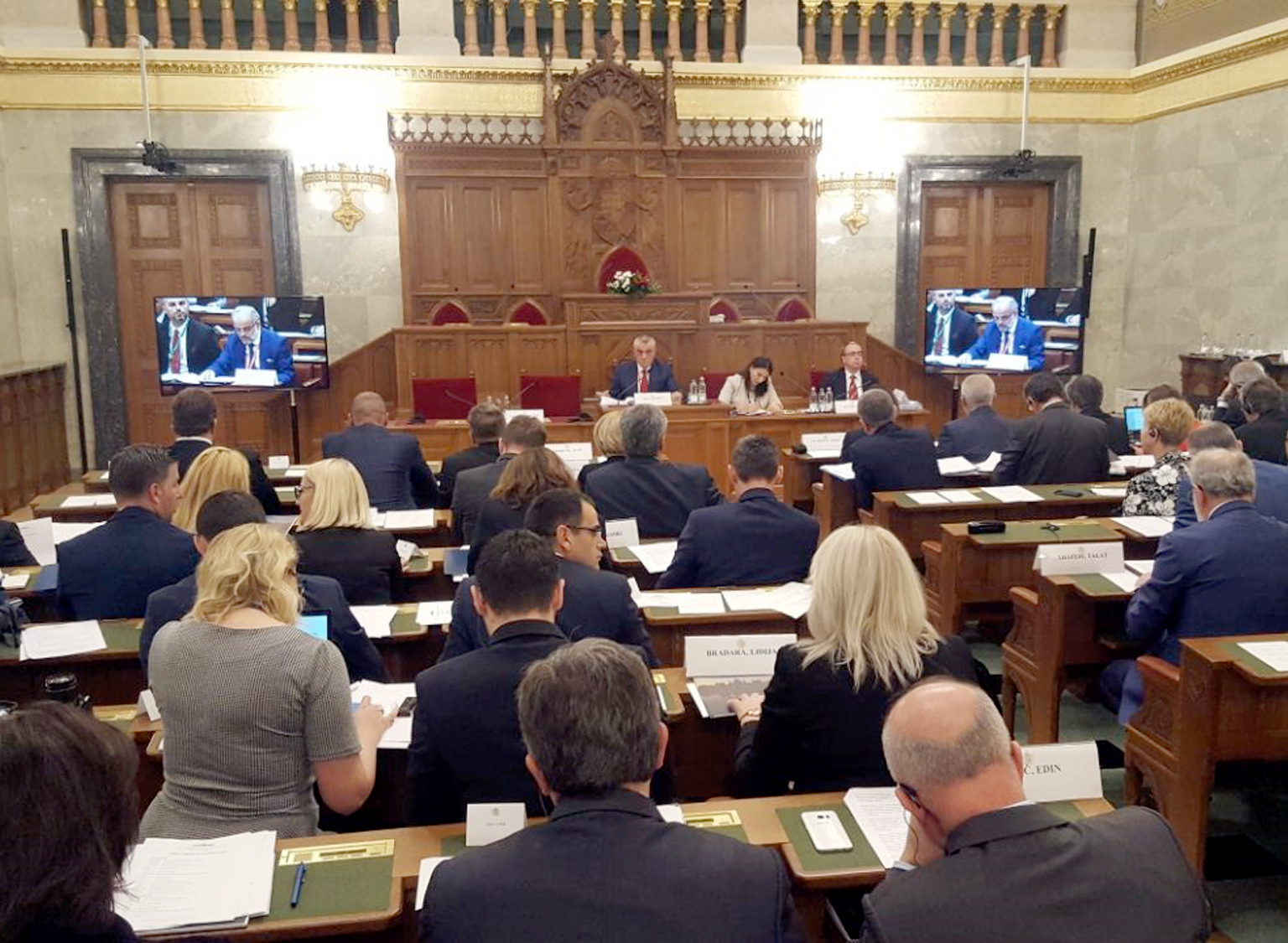 8th Conference of Speakers of Parliament; Photo: Parliament of Albania

BUDAPEST – The Speakers of the Parliaments of the Western Balkans participated at the 8th Conference of Parliament Speakers of the region, held in Budapest Friday.
Participants were Parliament Speaker of Serbia – Maja Gojković, PS of Montenegro – Ivan Brajović, PS of Albania – Gramoz Ruçi, PS of Kosovo – Kadri Veseli, PS of Macedonia – Talat Xhaferi and the Speaker of the House of Representatives of the Parliamentary Assembly of Bosnia and Herzegovina (PSBiH) Borjana Krišto and the Speaker of the House of Peoples of the BiH Ognjen Tadić.

Gojković: Serbia to continue to contribute to stability

A credible EU enlargement policy based on clear criteria is a strategic investment in security and prosperity of Europe as a whole in confronting all security challenges in the interest of lasting peace and stability, the Serbian parliament quoted her as saying.

The challenges facing Europe and the world today transcend states, regions and continents, she said.

Serbia is firmly committed to find the right answers through cooperation with its neighbours and the wider international community on issues such as terrorism, organised crime, cyber threats, illegal migration, human trafficking and other challenges, Gojković noted.

The countries of the Western Balkans, according to their history and tradition, are an inseparable part of Europe, Parliament Speaker Ivan Brajović.

As announced by the Parliament, Brajović was the chief speaker at the thematic panel “Western Balkans Security Dimension – Cooperation: Contribution to the Security of Europe”.

He pointed out that history had shown “how tragic it is when we do not talk and how strong we grow we are ready to cooperate and be open to seeing the wider context”.

According to him, this implies an open, honest dialogue, understanding of one’s own shortcomings that should be removed, as well as sharing and applying good neighbourly practices.

As he added, this also implies more frequent, more meaningful and faster communication between our leaders, parliaments, governments, businessmen and all other segments of the society in order to better understand our common voice in the wider Europe.

Speaker of Parliament of Albania Gramoz Ruçi explained that the priority of the institution he leads is strengthening political dialogue, concretized according to the May 17 agreement between Rama and Basha.

“The Albanian Assembly has adopted with broad consensus laws in the framework of electoral and judicial reform, fulfilling one of the main obligations that Albania has at this stage of the EU integration process, ” he said.

“The agreement is about improving the political climate in the country and restoring the opposition in the Parliament. The Assembly has approved the action plan for implementing the recommendations of the European Commission report , Ruçi said.

The Albanian Parliament Speaker said that full integration into the EU remains the main national interest and the strategic objective of Albania.

Veseli: Kosovo is working hard to become part of the EU

During the conference, Speaker of Parliament of Kosovo Kadri Veseli said that the integration of Western Balkan states will increase stability of the region.

Veseli said that Kosovo is working to meet all the criteria and standards necessary to accelerate the integration into the European Union.

“Kosovo’s integration into the European Union does not have alternative. We are working on meeting all the necessary criteria. Kosovo is a factor of stability and it is continuing to reform legislation in full compliance with European legislation. The European Union should provide more help and push the Western Balkans’ membership process,” Veseli said.

Xhaferi: We expect the EU to continue its open door policy

Macedonia, almost two years, lived in a semi-latent political crisis and our approach to the EU was, to be honest, in hibernation, said Speaker of Parliament of Macedonia Talat Xhaferi.

“I inform you that the current newly elected government, the new parliamentary composition, and all state institutions, work seriously towards the return and healthy walk on the road to full integration into the EU and NATO,” said Xhaferi.

He added that Macedonia expects the EU to continue its open door policy, not only in a declarative way, but through its mechanisms through which integration processes will intensify.

“The integration of the Western Balkan countries is, however, our common strategic goal and is beneficial to the citizens, but at the same time, the European Union without the Western Balkans will not be what fathers of united Europe speak or as it is said, the whole is when everyone has them,” concluded Xhaferi.

Krišto and Tadić: EU membership for BiH is at the top of the list of priorities

Krišto pointed out that EU membership for BiH is at the top on the list of priorities and that it guarantees the achievement of lasting peace, stability and security for investment, which ultimately leads to the overall progress of the whole country.

According to Krišto, the BiH integration path is far from the results that they can be satisfied with. Legal and political insecurity, Krišto said, as well as the denial of the right of constituent peoples to legitimate representation, are the main obstacles to the integration of BiH into the EU.

Tadić praised the fact that there is good security cooperation between the countries of the Western Balkans, as well as the cooperation of security agencies in these countries.

Regarding the security situation in BiH, Tadić informed the participants that the basic security threats that BiH meets are related to a certain type of religious extremism, political instability, external influence of foreign powers, poverty, as well as the culture of violence and violent resolving conflicts.

Speakers of the Parliament held bilateral and multilateral meetings during and after the conference.