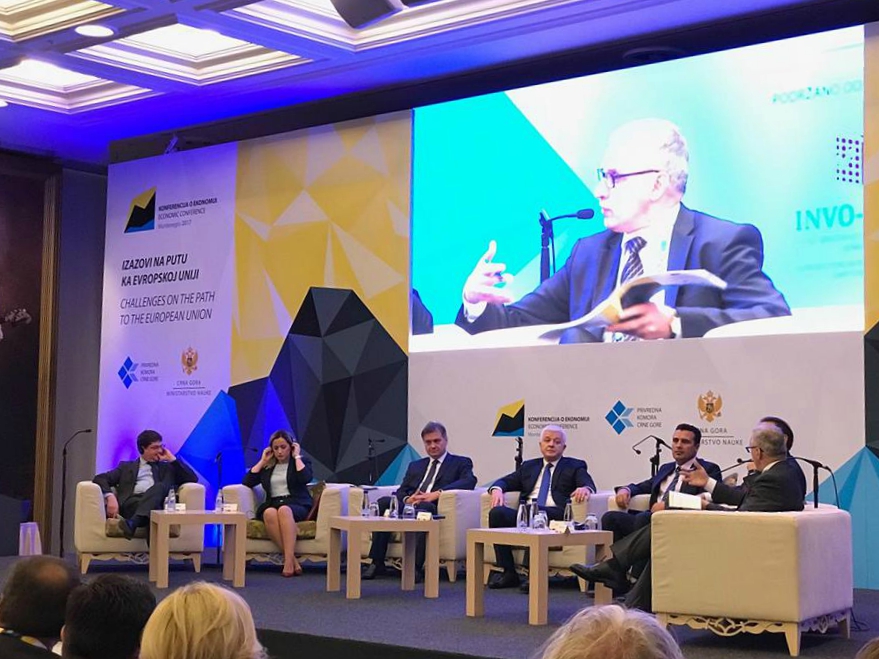 Conference "Challenges on the Road to the EU“; Photo: Council of Ministers of BiH

The Conference was opened by President to the Chamber of Commerce of Montenegro Velimir Miljušković, and as the panel guest the conference was addressed by EBRD President Pierre Heilbronn.

In his address to the panel on regional cooperation within the Berlin process and further integration of the region into the European Union, Denis Zvizdić said that the common commitment of the Western Balkans countries is to join the European Union. He said that from the Berlin meeting in 2014, a considerable progress was made. He said that the majority of countries in the world have the most intensive trade with their nearest neighbours, so he expressed his expectation that the trade cooperation will be improved in the future. He added that the Western Balkans countries have important space for the improvement of their mutual cooperation in the interest of development of their economies.

Zvizdić spoke on a need to better mutual traffic and communication connections, emphasising that this segment is of utmost importance for the whole region of the Western Balkans. He also spoke of the exchange and enabling labour and student mobility. He said that, following the European practice, it is necessary to enable regional mobility, foreign direct investments attraction, strengthening of digital economy, reform of education system, so that it would be harmonised in the best possible way with the labour market.

In his address, Zvizdić emphasised that the region remains committed to the European Union and that it is necessary to improve even more the issue of political stability and security at the territory of the Western Balkans and in the whole European Union. He invited for intensification of cooperation in the European integrations area, expressing his belief that all participants to today’s meeting will draw a considerable benefit form the mutual exchange of experiences.

Speaking at the panel discussion on the topic “Region after the four years of the Berlin Process” held within the conference “Challenges on the path to the European Union”, Prime Minister of Montenegro Duško Marković said that the responsibility of the Western Balkan states on their path towards the European Union must not and can not lie in Brussels, but among the countries and leaders of the Western Balkan region.

“In the region of the Western Balkans, we had a conflict of two fundamental values – the values of integration, communion and prosperity, and the values that the Balkans dragged to the beginning and the very periphery of the EU for years. We managed to overcome this other system of values, which is still present in our political, security and every other market. And it is not easy for us. We can avoid this conflict if we take responsibility in the region for the process. The responsibility for this process must not and can not lie in Brussels. The responsibility for this process is up to us, the countries and leaders of the Western Balkan states,” the Prime Minister of Montenegro said.

Marković noted that despite all the difficulties, a significant step forward was made in the Western Balkans in the past few years when it comes to the orientation of the countries of the region towards the EU, or towards the achievement of European values.

Recalling that this is already the seventh meeting of the prime ministers of the region this year, Marković highlighted that this is precisely a new moment of commitment and communion that gives strength and greater prospects for success on the road to the EU.

“If we stick to this principle, then Europe will not be so skeptical of us. If we do not come to Brussels with problems, but with solutions, then our perspective is quite certain,” Prime Minister Marković said, assessing that the platform of the Berlin Process through economic regional integration has already yielded results.

“We register that our economies grow, our competitiveness grows, and the region improves its position… Now we are determined to apply our commitments. We do not need action plans for this, we can do it ourselves. Now, the question of all the questions is whether we will transfer all this into a new real value,” the Prime Minister noted.

The Western Balkans must move forward to the EU, NATO membership, but it could only be accomplished if the bolster their cooperation, said Zoran Zaev, Macedonian PM.

“Ultimately, everything is up to the economy, even our EU and NATO membership. The cooperation between countries is important, as only together as large market they could be more attractive for the international business community,” Zaev said.

Together we must send a message to our countries that everything depends on us, he explained.

“By exchanging experiences, qualified workforce, creating cooperation-friendy political climate, eradicating the corruption, we send a strong signal that this region could be an attractive investment destination,” Zaev pointed out.

All countries of the region, he added, wish for the EU and NATO membership, first and foremost because of the living standard of our citizens.