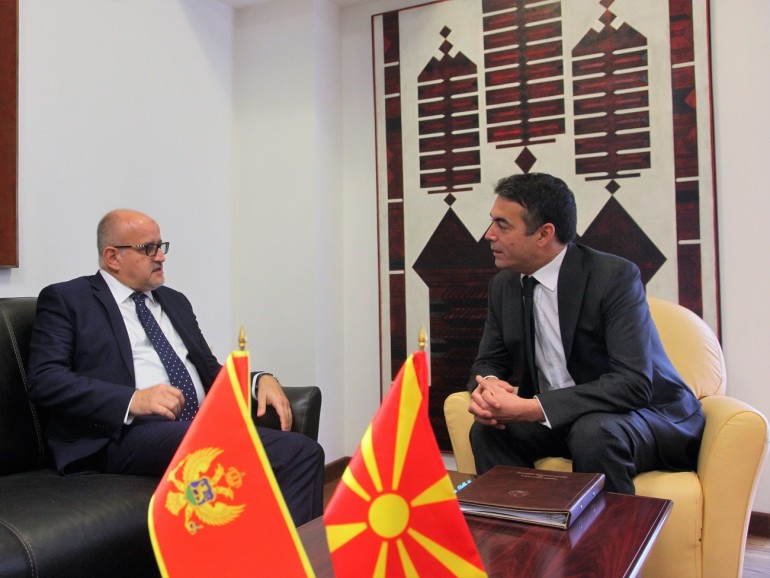 Darmanović and Dimitrov; Photo: Ministry of Foreign Affairs of Macedonia

SKOPJE – “There are no outstanding issues between Montenegro and the Republic of Macedonia. Relations between the two countries are an example of excellent cooperation in the region,” Foreign Minister of Montenegro Srđan Darmanović and his Macedonian counterpart Nikola Dimitrov agreed at today’s meeting in Skopje.

Darmanović pointed out that one of the priorities of the presidency of the US-Adriatic Charter, which Montenegro takes over from Macedonia on 1 January 2018, will be support for Macedonia’s NATO membership.

Darmanović reiterated Montenegro’s readiness to convey to share the experience from the current integration processes with Macedonia in order for the country to fulfil the conditions and achieve the standards for full membership in NATO and the EU more efficiently.

In this regard, the two officials discussed the importance of joint participation in regional initiatives such as the Berlin Process.

Darmanović also met parliament speaker Talat Xhaferi. They agreed that the two countries had a common goal – to join the European Union and that in that sense Montenegrin experience would be beneficial to Macedonia.

During his official visit to Skopje, the Montenegrin foreign minister also met with Macedonian PM Zoran Zaev, who emphasised that the relations between Montenegro and Macedonia were developing for the benefit of the citizens of the two countries. They also agreed that regional integration was important for the European perspective.