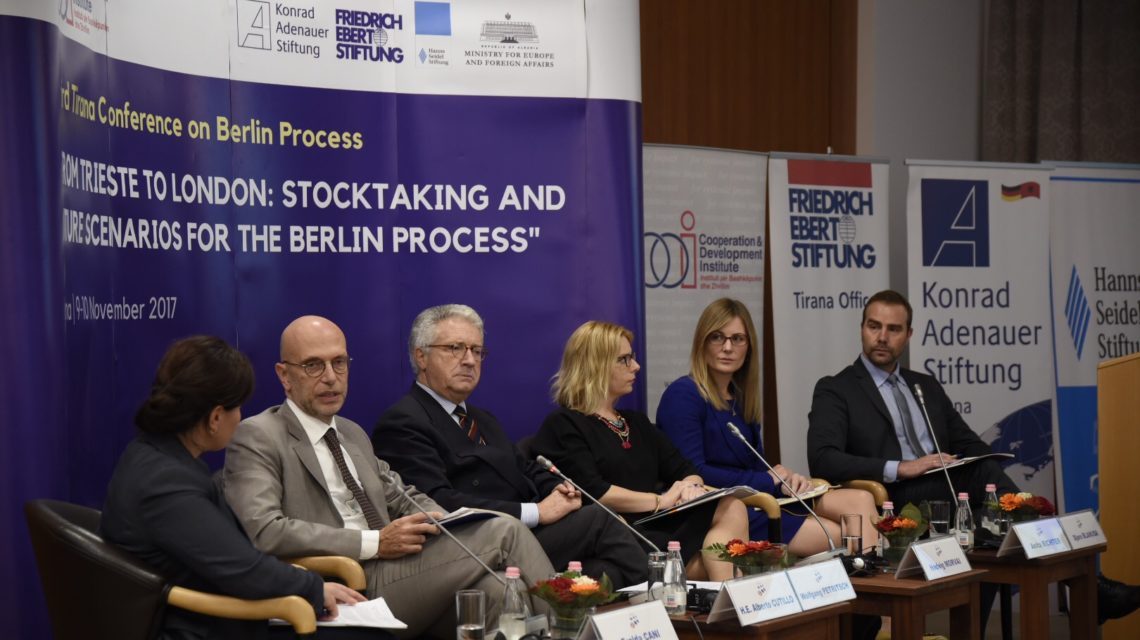 TIRANA – RYCO Secretary General Đuro Blanuša participated in Thursday’s panel discussion at the regional conference From Trieste to London: Stocktaking and Future Scenarios for the Berlin Process organized by the Cooperation and Development Institute from Tirana where he presented RYCO and ongoing challenges in the institution’s work.

RYCO Secretary General Blanuša pointed out that the role of the civil society of the region was of key importance during the process of RYCO establishment within the Berlin Process, reminded that role of RYCO is to bring young people of the region closer together and invited civil society, especially youth organizations, for their further support through building partnerships between themselves and with RYCO.

He highlighted that RYCO expects higher contributions of the governments of the region and the European Union as the youth sector in the Western Balkans can absorb far more funding for projects which aim to connect the youth of the region and promote reconciliation.

Previously, at the opening of the conference, Head of the Konrad Adenauer Foundation Office in Albania Walter Glos addressed the participants on behalf of another two German political foundations in Albania – Friedrich Ebert and Hans Seidel foundations. Speaking about RYCO, he said that it has a vital role in promoting cooperation in the region and recall that the governments of the region have a huge responsibility, especially Albanian Government as host country government, to provide all necessary conditions for work of RYCO. He called the governments of Albania and Bosnia and Herzegovina to fulfill their financial contributions for RYCO as these two governments have not done it yet.

In his opening speech, Deputy Minister for Europe and Foreign Affairs of Albania Etjen Xhafaj pointed out that RYCO is important for the region and that it should work on enhancing youth mobility and social inclusion in the region which will bring the region closer and prepare it for joining the European Union. He underlined that Albanian Government will stay committed to supporting regional integrations.

During the panel discussion in which RYCO Secretary General participated, Italian Ambassador to the Republic of Albania Alberto Cutillo said that Trieste Summit was a good opportunity for RYCO to announce the start of its work. Moreover, Executive Director of the European Fund for the Balkans Hedvig Morvai said that RYCO is indeed a true result of the Berlin Process and pointed out that there is a desire of the civil society of the region to contribute to the whole process.

The panel discussion was participated also by President of the Austrian Marshall Plan Foundation Wolfgang Petritsch and Programme Manager for Economic Reforms, South East Europe Division of the Organization for Economic Co-operation and Development Anita Richter.