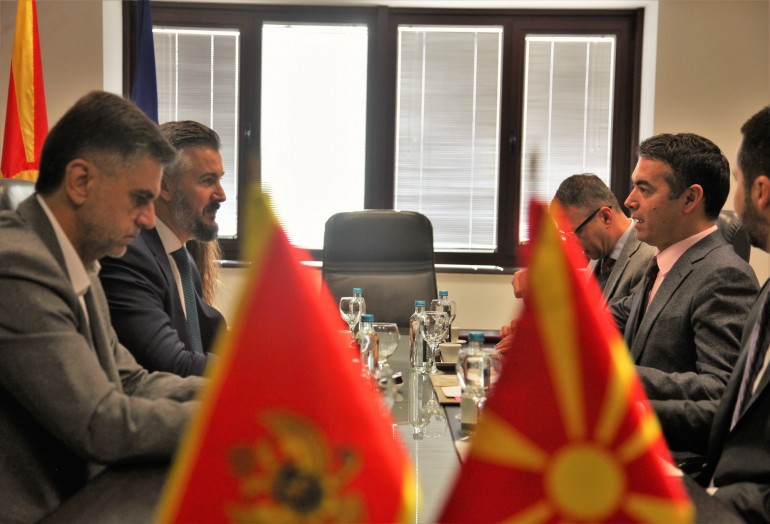 Pejović and Dimitrov; Photo: Ministry of Foreign Affairs of Macedonia

SKOPJE – Minister of European Affairs of Montenegro Aleksandar Andrija Pejović had a meeting with Minister of Foreign Affairs of Macedonia Nikola Dimitrov in Skopje, on sidelines of a conference on building capacity and regional cooperation in the process of EU integration of the Western Balkans.

Both ministers have expressed their commitment to a further cooperation between Montenegro and Macedonia in the process of EU integration.

Ministers have discussed the activities of the countries in the field of EU integration, as well as the political and economic situation of the region, challenges the EU is facing, but also the efforts for a further advancement of the Western Balkans on its path towards the EU.

They have agreed that the messages from the EU are positive and they expressed hopes that the future Bulgaria’s presidency, February’s Strategy for successful accession of Serbia and Montenegro to the EU, as well as the Summit of the leaders of the Western Balkans and the EU, which will take place on 17th of May next year in Sofia, will contribute to making plans for the countries of the WB on its path towards the EU membership.

Dimitrov has praised the results and advancement Montenegro has achieved, adding that Macedonia is counting on Montenegro’s experience and support.

Pejović added that the Montenegro is willing and ready to share its expertise and experience in all segments of negotiations with the EU and both ministers have agreed to intensify cooperation, especially regarding the negotiation chapter 31 – Foreign, security, and defence policy.