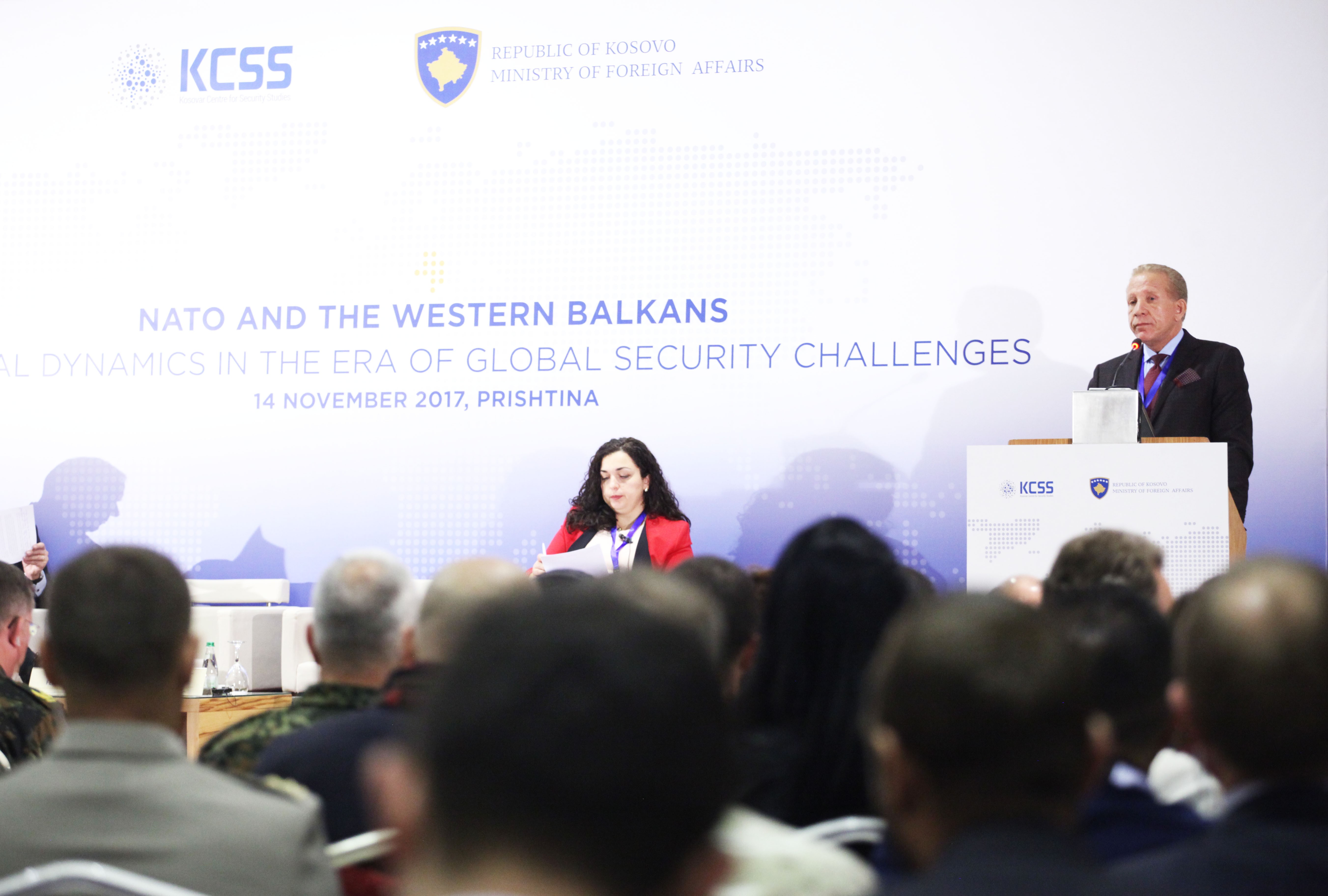 NATO and the Western Balkans: Regional Dynamics in the era of Global Security Challenges Conference; Photo: Ministry of Foreign Affairs of Kosovo

PRISTINA – Under the auspices of the Ministry of Foreign Affairs of Kosovo, and in partnership with the Kosovo Center for Security Studies, was launched the regional security conference “NATO and the Western Balkans: Regional Dynamics in the era of Global Security Challenges.”

In his introductory remarks, the President of the Assembly, Kadri Veseli, stated that Kosovo, on its tenth anniversary, has proven to be contributing as a factor for peace, stability and strengthening of democracy in the Balkan region. While speaking about Kosovo’s contribution to the dynamics of global security, Veseli emphasized that the country and the Kosovo Security Force are ready to assume other responsibilities.

“Its transformation into the Kosovo Army is an unstoppable, indispensable process and it is in the interest of all parties aspiring for a rapid integration of Western Balkans into Euro-Atlantic structures. Therefore, we believe that this process will very soon be concluded, in compliance with the constitution and the will of all citizens of Kosovo. The state of Kosovo is a state of all its citizens, regardless of ethnicity or religion, and everyone gains from its advancement and empowerment” stated Veseli.

Prime Minister Ramush Haradinaj spoke initially about the global security challenges, saying that no state is self-sufficient for national security. He further spoke about the objectives of the state of Kosovo in terms of regional and wider security, emphasizing the need for inter-state cooperation.

“Kosovo, as a state, has established its own path. We are not neutral in terms of military and foreign policy. We want and deserve to join NATO as soon as possible. We want NATO to continue to stay in Kosovo. We are right and we are making all the efforts to establish the Armed Forces of Kosovo”, stated Prime Minister Haradinaj.

Meanwhile, he added that Kosovo intends to reach the stage of Dialogue for Membership in NATO within this decade (namely by 2020).

Deputy Prime Minister and Minister of Foreign Affairs, Behgjet Pacolli, in his speech before the participants, thanked the international community and NATO for their contribution in Kosovo, while requested that Kosovo begins the NATO membership process.

NATO Assistant Secretary General for Public Diplomacy, Tacan Ildem, also spoke at the conference. He encouraged the parties of the dialogue, namely Kosovo and Serbia, to continue with the dialogue, as according to him, this is the path NATO supports.

“It is very important, and NATO supports the efforts for an EU-facilitated dialogue between Belgrade and Pristina”, stated NATO’s Assistant Secretary General for Public Diplomacy, Tacan Ildem.

Regarding the transformation of the Kosovo Security Forces into the army, NATO Assistant Secretary General for Public Diplomacy, Tacan Ildem emphasized that this should be done through the constitutional change.

He also spoked about the future of the region.

“We support the Euro-Atlantic aspirations of the people in the region and believe strongly that democratic values, rule of law and good neighbourly relations are not luxuries but prerequisites for peace and development”.

This conference was attended, in separate panels, by representatives of Western Balkan states, senior NATO representatives, regional and international experts.

EU delegation to BiH calls for calming down political rhetoric