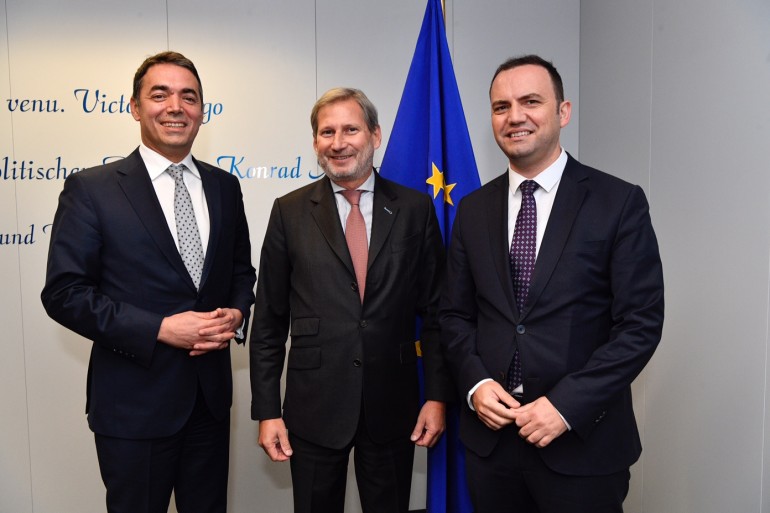 BRUSSELS – The High Representative for Foreign Affairs and Security Policy/Vice-President of the European Commission, Federica Mogherini, met today with the Deputy Prime Minister of Macedonia, Bujar Osmani, and Foreign Minister Nikola Dimitrov to discuss the latest political developments in the country, the implementation of the government’s programme and the country’s way forward on the European Union integration path.

The High Representative highlighted the importance of the reform drive in the country, stressing that 2018 will offer a unique opportunity to make significant progress in the enlargement process throughout the region and make the move towards EU integration irreversible.

The European Union significantly strengthened its engagements with the Western Balkans region in 2017, including through the European Council’s unequivocal commitment to the region in March 2017 and with President Juncker’s speech on the State of the Union. Federica Mogherini reaffirmed her personal engagement and support for the country and the whole region on their EU accession path.

Osmani pointed out the position of European Commission President Jean-Claude Juncker, who in his annual address to the Union, stressed that for a secure European Union, it is necessary to maintain a credible process of enlargement of the Union with the Western Balkans countries.

According to Osmani, that would not be possible if the Commission does not include Macedonia in its strategy for the enlargement of the Union by 2025, which would be drafted at the beginning of next year, but also with the other concrete steps that would provide a basis for further strengthening of European optimism in the country and the region.

“It is not possible to have the credibility of the enlargement process, without Macedonia being part of the European Commission’s Strategy for the Enlargement of the Union,” Osmani stated. He added that appropriate conditions have been created for the year 2018 to be a historic year for Macedonia in terms of Euro-Atlantic ambitions, when he expects progress that will close the EU and NATO issue in Macedonia.

During the visit, Osmani and Dimitrov had a working breakfast with the EU Member States’ ministers of Foreign Affairs, where they briefed on the progress in fulfilling obligations arising from the Euro-integration processes, as well as a meeting with EU Commissioner for Enlargement Johannes Hahn.

Vučić meets with Hahn in Belgrade

Dimitrov: Macedonia and Greece will form working groups for the name negotiations