The participants endorsed the Declaration on Environment and Climate Action in the Western Balkans agreeing on the growing need in the region to improve the coordination of existing regional initiatives and projects as well as those which would be developed to serve the SEE 2020 Strategy goals. They also recognised strong interlinkages between energy, and environment and climate change policies, looking for ways to strengthen inter-sectorial cooperation at the highest political level.
Goran Svilanovic, RCC Secretary General addressed the participants of the meeting stressing that the environment and climate change mitigation and adaptation underpin all efforts towards advancement of regional socio-economic situation, adding that the joint action represents the only valid response that could lead to tangible results.
“RCC’s annual public and business opinion survey Balkan Barometer 2017 (BB) shows that 73% of citizens of the region perceive climate change as a problem, continuing upward trend registered in 2015. 77% of businesses in South East Europe say they have already undertook some measures to reduce harmful impact on their environment. Therefore, this is an opportune moment, which should be used to identify and implement joint activities that would follow up the implementation of ambitious regional Multi-Annual Action for Regional Economic Area (MAP REA) in the Western Balkans economies in areas of trade, investment, mobility and digital integration, each one involving environmental dimension.”
Regional work on environment protection and climate change mitigation and adaptation has already been initiated through Regional Working Group on Environment (RWG Env) co-chaired by the RCC and rotating co-chairmanship of Western Balkan economies. The Working Group is tasked with the implementation of the Environment Dimension of the RCC’s SEE 2020 Strategy.
Goran Trivan, Serbian Minister for Environmental Protection underlined that by setting up a ministry dedicated to the environmental and climate changes issues, Serbian Government showed its determination to seriously tackle these issues.
“We are glad for having the opportunity to discuss environmental and climate change challenges that the region faces but also to identify regional priorities, and decide on what is the best way forward to address these challenges. Acting only on national levels without proper regional coordination would not suffice and therefore Serbia is to initiate series of regional initiatives to deal with environmental and climate change issues on a wider scale. Importance of cooperation in this field is confirmed by the fact that 2016 was the warmest year on record and on the global level 1.1 °C above the preindustrial period, while it is expected that 2017 will showed to be one of the three warmest years on record. Moreover, we could expect to see the negative trends with growing amount of disasters to continue until the 2060’s.”
The meeting discussed the implementation of the Paris Agreement on Climate Change, contributions of the Western Balkan economies within the environment agenda and ways for the region to properly respond and adapt to inevitable climate changes.
The discussion also included preliminary results of the Study on Climate Change in the Western Balkans Region and Impact on Various Sectors of Economy, involving representatives of the European Commission, Environmental Agency from Austria, German Federal Ministry of Economic Cooperation and Development, UN Environment, and other relevant agencies and organisations operating in the region. The preliminary findings of the draft Study show that the region is much more vulnerable to climate change than the rest of the Europe in many sectors, which requires close attention and action of the region’s economies.
Concluding the meeting Serbia officially handed over the co-chairmanship of the Reginal Working Group on Environment to The Former Yugoslav Republic of Macedonia for the following year.
Bonn is currently a capital of climate change and environment protection, as the Annual United Nations Climate Change Conference – COP 23, was taking place in Bonn as of 6 November and is concluding today. 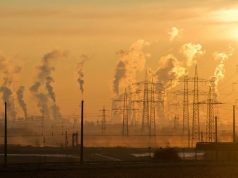 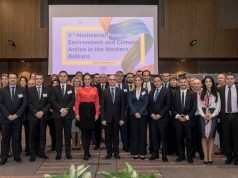