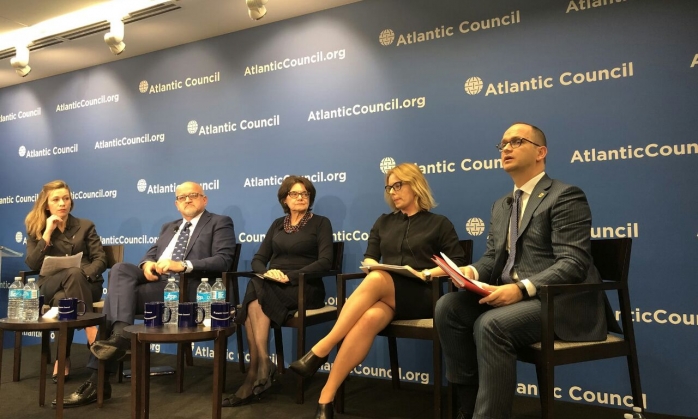 WASHINGTON – It does not matter how much the countries of the region are advancing regarding the Euro-Atlantic integration process, the Western Balkans is more or less facing the same challenges such as the rule of law, corruption and organized crime, ethnic tensions or the economic disparity, it was concluded in yesterday’s conference “A coming storm? Shaping a Balkan Future in an Era of Uncertainty“, organised by the Atlantic Council.

What are the greatest barriers to investment and economic growth, and what can countries do to overcome them, and how can the region effectively foster the next generation of entrepreneurs to drive positive economic change moving forward, was discussed at the panel “Investing in the Future: Can Entrepreneurs “Fix” the Balkans?“.

It was stated that the Western Balkan region has some of the highest unemployment rates and lowest wages in Europe, a situation with well-documented economic and political ramifications.

The US Senator Ron Johnson explained why it is important that the West pays attention to the Western Balkans.

“If we do not pay attention, and do not everything we possibly can to strengthen those ties and help the Balkans become economically stable, we will miss this point in our history, and we simply cannot let that slip through our fingers.“

Ivica Dačić, First Deputy Prime Minister and Minister of Foreign Affairs of Serbia pointed out that the economy could have positive impact on the stabilisation of the whole region, but on the other hand, it is a process in which everything is connected – there is no growth in the economy without the stability of the region.

“We need to see how to remove barriers for our economic cooperation and in what way to raise and increase our GDP which means to increase our employment and investments in our country.“

Behgjet Pacolli, First Deputy Prime Minister and Minister of Foreign Affairs of Kosovo stated that the region has the potential to provide better opportunities for its people, but it also has a lot to offer to Europe – many natural resources and young population, favourable climate conditions and good geographic location.

“In order to improve the economy of the region and bring more investments we need to change the way of doing politics, to improve the investment environment and also to focus on the functioning of the rule of law, reduction of bureaucracy in favour of quality and increase efficiency.“

Pacolli added that Kosovo is young country and they are working “very hard to fight corruption, to reduce the quantity of administration in favour of quality and to facilitate the full access to the investors into the domestic market.“

Cyril Muller, Vice President, Europe and Central Asia of the World Bank pointed out that the key areas of reform in the Western Balkans are concentrated around labour market barriers, that still exist.

“Each country of the region is owning a strong growth agenda and that growth agenda has a realisation that  the legacy issues can be dealt with and that the private sector can be a part of that solution.“

On the next panel “Great Risk, Great Reward: Tackling the Balkans’ Enduring Political Challenges“, the ongoing dialogue between Belgrade and Pristina, the name dispute between Greece and Macedonia, and the internal political turmoil in Bosnia and Herzegovina are said to be major impediments to the region’s stability.

Nikola Dimitrov, Minister of Foreign Affairs of Macedonia explained that Macedonia has been waiting for a long time for the EU and NATO enlargement processes to be resumed.

“In that waiting room, we have lost our compass, and we have undermined the functionality of our institutions.“

He explained that Macedonia has had a crisis for two and a half years, but it was a blessing in disguise.

“We have learned the most important lesson – we need strong institutions,“ explained Dimitrov adding that what really matters is building Macedonia as a democracy governed by the rule of law.

“This made our country a candidate country which takes the reform process very seriously.“

Deputy Prime Minister of Kosovo Enver Hoxhaj stated that the main challenges which affect the Western Balkan region – the name issue, the relations between Kosovo and Serbia and the internal situation in Macedonia, have put the whole region in the kind of limbo.

“Five years ago, when we started the dialogue between Kosovo and Serbia, we had three main goals – how we should normalise the relation with Serbia, how to normalise the situation in the north Kosovo, and the third goal was how to use the dialogue in order to improve our relationship with the EU.“

“As long as we have the outstanding, open bilateral issue between Kosovo and Serbia and as long as Macedonia is facing the name issue, we will have the situation of a status quo.“

Hoyt Yee, Deputy Assistant Secretary for European and Eurasian Affairs, US Department of State said that there has been a significant progress in Macedonia.

“We saw very close partnership of international community – the EU and the US, but more importantly the willingness of political parties, especially the opposition to speak out and participate in elections, and it produced a pro-reform, pro-EU and pro-Western government.“

On the question of how to deal with the problems in the region, he said that there are few things to be done.

“The common analysis is what we need, but we do not have right now. The problems need to be addressed on the urgent basis,“ he said adding that if those problems do not solve, the Western Balkans will be unstable.

He also explained that partnerships are important – between governments, the EU and the US and that they are a two – way street, but also a leadership commitments, especially in the process of the Euro-Atlantic integration process.

Speaking about the involvement of the US in the Western Balkans, Yee pointed out that the US has been involved and that they intend to stay involved.

Janusz Bugajski, moderator of this panel and Senior Fellow, Center for European Policy Analysis explained that the best way to tackle the enduring political challenges is to be more determined and more durable than the challenges. On the question what exactly can be done, how quickly and who can do it, Bugajski suggested three strategies – one, fighting foreign destabilisation, building functional and internationally recognised states, and integrating each of them into the EU and NATO.

“Going the Distance: The US-EU Partnership in the Balkans and Prospects for Euro-Atlantic Integration“ was the next panel on which it was discussed about political and economic reform and stability in the Balkans, which was encouraged by the EU and the US.

Ditmir Bushati, Minister of Foreign Affairs of Albania, explained that the Western Balkan countries face different challenges. However, the alignment of the foreign policy of the Western Balkans with that of the EU is not the same, he believes.

“That is why our first challenge is how to transform the Western Balkans into a true political, economic and security area.“

When speaking about the European integration, Bushati stated that there is the need not to fall into the trap of chapters.

“We have a situation in the region where you do not always find the correlation between the chapters and the speed or the quality of the accession process or the democratization cycle,” adding that it does not matter whether Montenegro has opened 28 chapters and Albania is about to start the accession negotiations, the region is more or less facing the same challenges such as the rule of law, corruption and organized crime, ethnic tensions or the economic disparity.

Minister of Foreign Affairs of Montenegro, Srđan Darmanović stated that the region has been historically recognised as a powder keg of Europe.

“Situation now is definitely better, these tragic time will not come again. We have seen the commitment of the countries of the region to integration process and good neighbourly relations,“ Darmanović stated, adding that problems still exist and that in the last few months we have seen a certain deterioration of relations.

He also addressed the security, economic and other benefits of NATO membership for Montenegro, at the same time referring to the positive effects of the membership on the stability of Southeast Europe and promotion of Euro-Atlantic values, which is also in the interests of the Alliance and its members.

Executive Director of the European Fund for the Balkans, Hedvig Morvai mention what Minister Dimitrov said about the region being in the “waiting room“.

“What we can witness in the Western Balkans is a very complex situation, which was partly caused by the fact that we lost guidance and that in this time of very complicated global changes and the times of uncertainty, it was very difficult for the Balkan countries to remain on a steady course towards democracy building.“

She explained that why the term of stabilitocracy was recently launched in the Western Balkans – democracy was sacrificed for the sake of stability.

“The EU was more interested in keeping the Balkans stable than in carefully looking into the developments.“

Fajon on Montenegro: Still much work to be done by 2025

Unlocking Kosovo in 2021: last chance to right the wrong