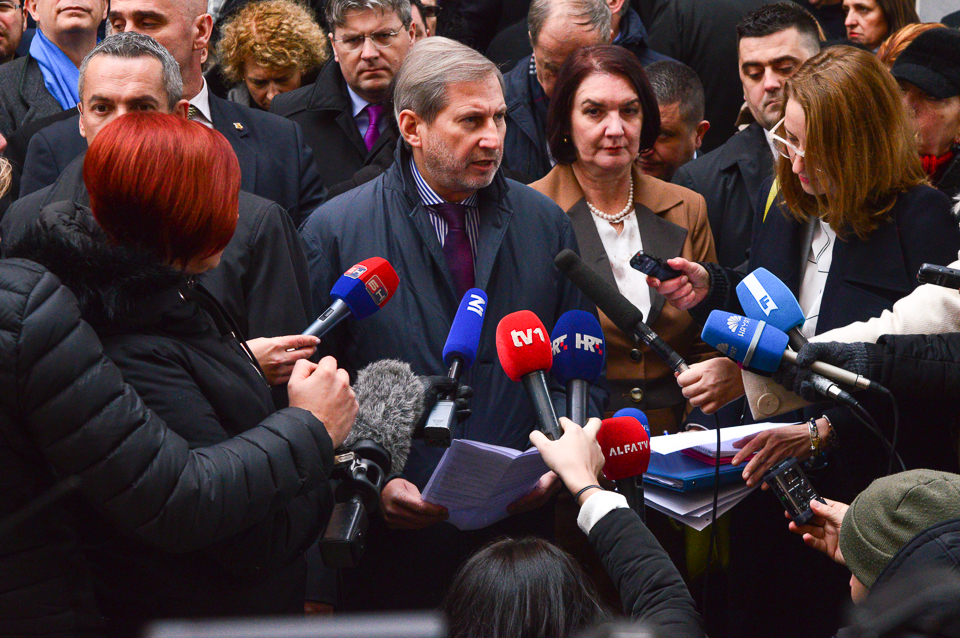 Johannes Hahn; Photo: Delegation of the EU to Bosnia and Herzegovina

SARAJEVO – Commissioner for European Neighbourhood Policy and Enlargement Negotiations Johannes Hahn met with key political representatives in Bosnia and Herzegovina today to reiterate the EU’s engagement to support the country on its EU path and to discuss the implementation of the necessary reforms and measures.

Ahead of this important visit, Commissioner Hahn noted that “the only way to move forward in the EU integration process is to achieve concrete results on reforms. This includes delivering on the Reform Agenda measures, create jobs, strengthening of rule of law and improving the quality and efficient of public administration.”

Commissioner Hahn met with Chair of the Council of Ministers Denis Zvizdić, Members of the BiH Presidency, Dragan Čović and Bakir Izetbegović, as well as representatives of all the main political parties who signed the Written Commitment to jointly pursue EU integration in February 2015.

During the visit, Commissioner Hahn also inaugurated the new building hosting the Prosecutor’s Office of BiH in Sarajevo, which was funded by the EU. The support formed part of financial assistance of over EUR 50 million that the EU provided for the justice sector in BiH.

“The opening of this building is a testimony to the EU’s continued efforts to strengthen judiciary throughout BiH so that it can ensure adequate services of all BiH citizens, by protecting their rights, and in particular standing up for the most vulnerable ones. Rule of law is at the core of the EU accession process. Therefore, the credibility of the accession bid depends largely on the existence of an independent, accountable, professional and efficient judiciary,” Hahn said at the opening ceremony.

During the various meetings, Hahn spoke to political leaders about a number of urgent issues for the EU path of the country, including the delivery of replies to the Questionnaire, reaching agreement on countrywide strategies, as well as the need to adopt the set of laws on excise duties.