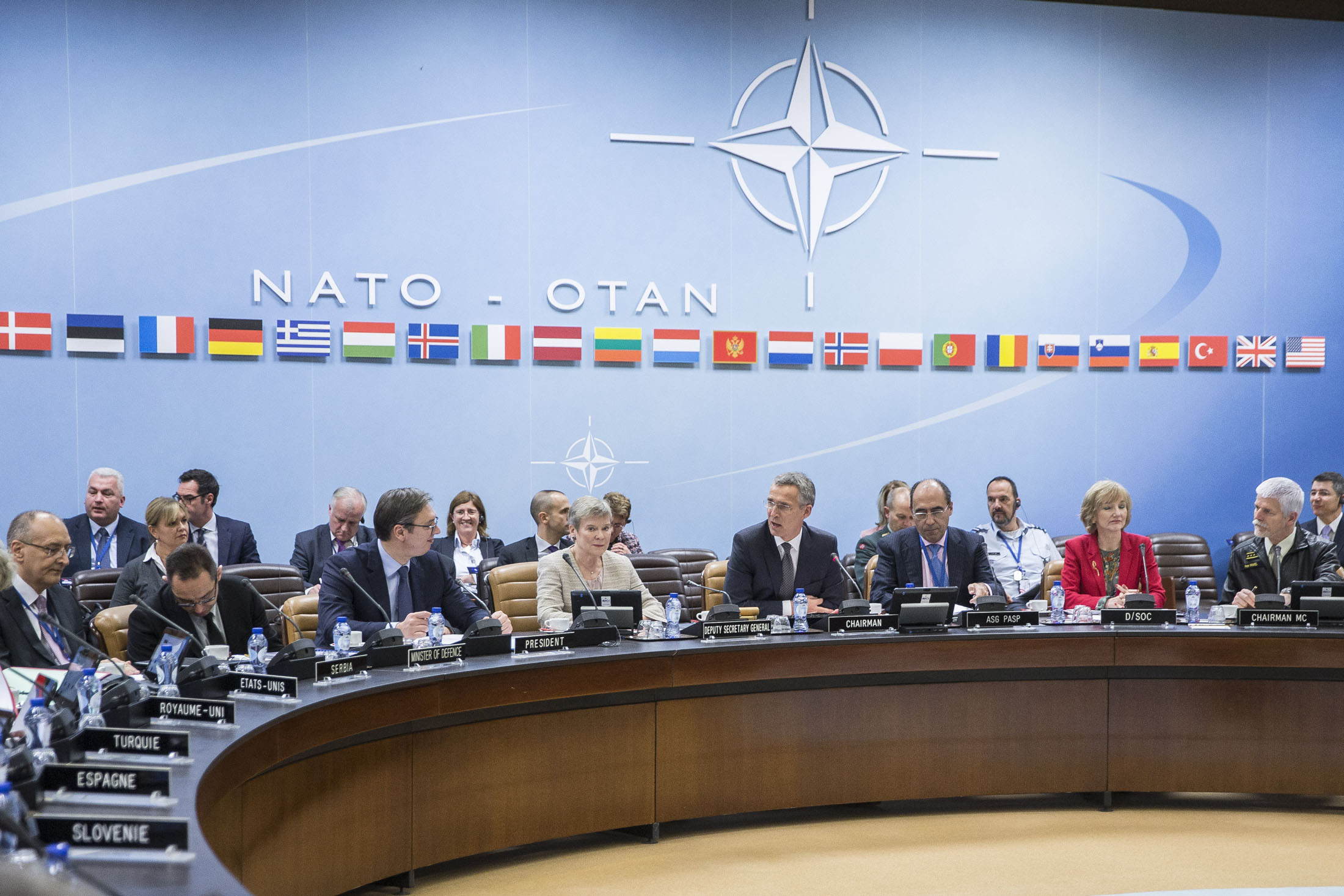 Visit to NATO by the President of the Republic of Serbia; Photo: NATO

The revision of the Individual Partnership Action Plan (IPAP) has been increasingly discussed in Serbia. What exactly is the IPAP and what kind of benefits does it bring to Serbia?

The Individual Partnership Action Plan represents the most intensive form of bilateral cooperation between NATO and countries that are not members of the Alliance.

This mechanism of cooperation was established in 2002 at the NATO Summit in Prague, with the aim to establish a more comprehensive cooperation with partner countries, and to make it as adaptable as possible to the needs and interests of each partner.

As it was noted then, “Allies are determined to continue and improve their support and give advice to interested partners in order to help them face the challenges of the 21st century”.

Thus, IPAP is a means of structuring and adequately organising bilateral cooperation between NATO and its partner countries to carry out reforms in a non-NATO country. In practice, it is just another indication proving that this alliance is more than a military-security organisation, as it is often perceived by the public, and that cooperation with the Alliance can include different areas.

In addition to the “basic” areas of defence, security and military issues, there are also some “alternative” ones, such as public information, cooperation in the field of science, the environment and emergency planning, as well as a data protection.

When it comes to the Individual Partnership Action Plan for Serbia, in February 2011, a decision was made at a session of the Government of the Republic of Serbia to launch the procedure for the drafting of this plan, and the presentation document was adopted in July of the same year.

That the change of government does not make a turn in the course of Serbia to work closely with its Western partner, it was shown in December 2014 when the new Serbian government adopted this document, and in early 2015 it was adopted by NATO. Given that the IPAP represents a cooperation plan and not an international agreement, it did not have to be ratified by the National Assembly.

The first IPAP was established for the period of two years, but it was extended by another year on the initiative of the Government of Serbia, therefore, it covers the current 2017.

This action plan includes over a thousand activities that members of the Serbian Armed Forces and the Ministry of Defence have at their disposal, Serbia, according to the “a la carte” principle, selects up to 160 in which it wishes to participate.

Elaborating on the views of NATO, Knut Kirste, political adviser for Serbia in the Political Affairs and Security Policy Department of NATO, spoke in an interview for the European Western Balkans on cooperation with Serbia through the IPAP.

“Our cooperation is focused on areas where Serbia wants to cooperate with NATO and where NATO can bring added value, including for instance the reform of national security forces and institutions and security-related scientific cooperation.”

Formally speaking, the Serbia-NATO Individual Partnership Action Plan has been organised into four chapters – The political and security framework, Defence and military issues, Protection of classified information and Public diplomacy.

When it comes to the first chapter, the IPAP political and security framework is made up of two parts. The first focuses on the already established direction of Serbia’s foreign policy and its orientation towards the European Union, Serbia’s cooperation with the Alliance through the Partnership for Peace programme, and the promotion of regional cooperation.

A proof of close cooperation can be seen through the regular meetings of the NATO Secretary General with the President of Serbia, Aleksandar Vučić. Namely, in addition to the meeting on the margins of various conferences, the two of them met every November for the last three consecutive years. Secretary-General Stoltenberg visited Serbia in 2015, while the President of Serbia visited the NATO headquarters both in 2016 and this year.

The second part pertains, to a large extent, to areas covered by Chapters 23 and 24, which are quite significant chapters in the negotiations with the EU, thus representing the improvement of the internal social and political order.

This section covers marginalized groups, the promotion of gender equality, protection of national minorities, greater inclusion of Roma, poverty reduction and the improvement of the situation of vulnerable groups, such as children, women, persons with disabilities, LGBT people.

A good part of these activities in the section that refers to deadlines is presented as a continuous process, which in fact tells us that the reform in these areas is permanent.

When it comes to defence and military issues, the objectives covered are those related to ensuring peace, an effective defence system, as well as cooperation with European and international partners, which is in accordance with the Defense Strategy of the Republic of Serbia.

The reform of the defence system for the purpose of achieving its economic sustainability stands as one of the goals. It is in this process that Serbia-NATO group, which has existed for more than a decade, has a significant place. Among other things, its significant purpose is also to encourage NATO members to coordinate their activities more effectively with Serbia in order to better implement defence reforms.

It is worthy of note that this group is in charge of supporting cooperation within the Operational Capabilities Concept, i.e. of achieving partner planning objectives, as well as improving the coordination of a complete bilateral cooperation.

Foreign Minister Ivica Dačić also emphasized the extent of cooperation within the plan, noting that “in the past five years, Serbia held 44 military exercises with the United States and NATO members.”

After several dozen exercises which Serbian Armed Forces participated in outside the borders of our country, the first military exercise with NATO on our soil was announced and planned for 2018. It is a regional military exercise REGEX 18, which is implemented according to NATO standards for members of the Mediterranean Dialogue, member states of the Partnership for Peace and NATO.

IPAP for Serbia also means cooperation in the field of classified information protection. Although this field is regulated in the domestic legal system, special attention given to this topic by the chapter in the IPAP aims to highlight the need for modernisation of this system with the intention to exchange information and data with the EU and NATO in the future.

Cooperation in this area existed even before the IPAP when Serbia signed Data Security Agreement and the Access Codex with NATO. Therefore, a tendency for systematisation of communication has existed for a long time and IPAP envisages its improvement.

The fourth chapter covers several important topics and is called public diplomacy, scientific cooperation, and emergency management. When we decompose them into the components, the situation looks as follows.

Scientific cooperation is realised through the programme “Science for Peace and Security”. Domestic institutions and research organisations make use of these benefits. Projects include “Women for Peace and Security”, projects on the fight against terrorism, fight for greater security in the energy and ecological field.

Emergency management is a special chapter in which Serbia and NATO are successfully cooperating.

As announced for the next year, Serbia will host for the first time a field simulation exercise in the area of an emergency situation in a joint organisation with NATO, i.e. the Euro-Atlantic Center for Disaster Response (EADRCC).

Serbia successfully participated in similar exercises that were held this year and the previous one in Montenegro and Bosnia and Herzegovina, which shows the continuity of cooperation in this field.

When it comes to public diplomacy, the impression is that there is far more room for improvement in this plan. This was also pointed out by Acting Assistant of Foreign Minister for Security Policy, Ambassador Branimir Filipović, who characterised it in an interview for the European Western Balkans as a problem area.

“The area of public diplomacy is identified as ‘the weakest link’, with the assessment that additional engagement by both NATO and our side is needed in order to better inform the public about the scope of mutual cooperation,” he said.

He also announced certain changes when it comes to the upcoming revision of IPAP.
“We have prepared a draft of the Strategic Guidelines for informing the public about the process of cooperation between Serbia and NATO through the Partnership for Peace programme, which will soon be submitted for adoption to the Government of Serbia,” said Ambassador Filipović.

He explained the need to inform the public objectively and timely about the benefits of such cooperation with the aim of adequately presenting state activities.

On the other hand, military analyst Aleksandar Radić does not have such an impression, as the annual evaluation of the IPAP agreement is not open to the public.

“The attitude of the current authorities is to treat as confidential the content of documents and activities which in the practice of our region are considered to be a public issue and on which the expert public and journalists are being informed,” he said.

Therefore, the situation is complicated by the fact that the annual IPAP evaluation is not publicly disclosed. If the contrary were to happen, the interested public could have a clear insight into the extent to which the scope of Serbia and NATO cooperation is comprehensive.

In this way, an easier access to facts about the level of cooperation and the subsequent benefits for Serbia would contest the titles in tabloids such as “NATO preparing the invasion of Serbia” more easily, but also open the possibility for the entire society to overcome emotional elements in the consideration of the security position of our country.