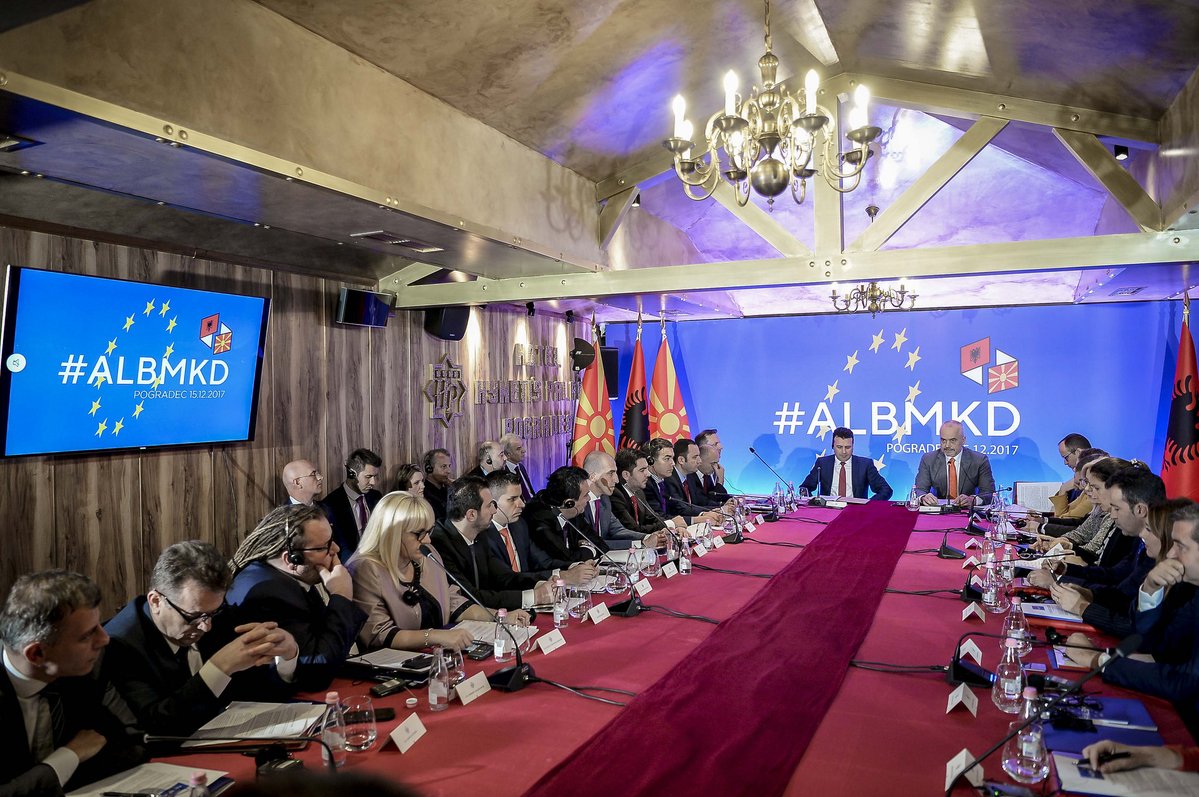 TIRANA – The first ever joint session of Albanian and Macedonian governments on Friday opens a new chapter of good neighbourly relations between the two countries.

Opening the joint meeting in the Albanian border town of Pogradec, Prime Minister Edi Rama said the two governments are holding the session to take the bilateral relations to a new qualitative level of a shared strategic orientation

“As two neighbouring countries, we have the obligation to offer more development and work for more prosperity for our citizens by improving the infrastructure interconnectivity,” Rama said.

The Albanian government head put emphasis on the bilateral cooperation to modernize infrastructure and facilitate the exchange of goods and services between the two countries.

Rama said that the two countries are committed to relax the customs and border procedures, adding that a special attention will be attached to modernization of the road, railroad and energy infrastructure linking Albania and Macedonia.

According to him, the two countries are committed to carry out major development projects, including the construction of the Corridor 8 and the Elbasan-Pogradec railway.

The Premier also noted that the two governments will cooperation on the construction of new two-lane highway, Arberi Road, designed to link the capital, Tirana, with the Dibra region on the Macedonian border. He said the Arberi Road will lead to significant economic benefits for both countries.

“We will cooperate with Macedonia on the Arberi Road project. Construction of Bulqiza-Bllate (on Macedonian border) has completed. This road will generate significant economic benefits for both countries. There is no doubt that extending the project to Skopje will shorten the distance and provide Macedonia access to Albania’s seaports. We are confident that the meaning of the strategic importance of this axis is complete also in terms of efforts to strengthen the foundations of fundamental coexistence between Albanians and Macedonians,” Rama stated.

“We will work together to allow for free movement of goods by creating mechanism of cutting procedures in order to boost trade exchanges,” Rama said, adding that “hese measures are part of our economic development approach to creation of the regional economic zone.

“The objective of this meeting is to strengthen cross-border cooperation. We share tremendous water wealth. We have the great privilege to be on the shores of Prespa and Ohrid and it’s time to appreciate the common approach and appreciate these assets,” Rama added.

The government head also said that a joint Economic Council will hold first meeting in the first quarter of the next year.

The Albanian PM praised his Macedonian counterpart Zoran Zaev, saying that under his government Macedonia has entered a new cycle.

“No one else has so enthusiastically experienced the end of a turbulent cycle in Macedonia and opening a new cycle there. Together with Albania’s and Macedonia’s great partners we felt encouraged by Zaev’s leadership, because we know such approaches are fuelled by the desire to build wholly democratic societies and countries, independent and democratic institutions,” Rama stated.

“Based on this very positive moment we have revitalized contacts and relationships. In addition to numerous bilateral visits and meetings, with Prime Minister Zaev we have shared the commitment to contribute towards a region without barriers to the flow of capital, people and ideas,” he said.

PM Rama noted that the two countries have signed the largest number of agreements in the region, but many of them have yet to be materialized into concrete actions, therefore relevant institutions should start an analysis to take measures towards implementation of this framework.

The Premier emphasized the importance of implementation of the bilingualism in Macedonia by extension of the official use of the Albanian language across the country.

“I hope that legislation to extend the official use of the Albanian language across Macedonia will be adopted and implemented soon. The house of the Alphabet Congress in Manastir needs to be transformed into a cultural and artistic centre,” he said.

“We have been working and will continue to work for the well-being and security of the Macedonian minority in Albania,” he stated.

Rama said that with the adoption of the new ethnic minority law, the Albanian government has made a major step towards respecting minorities across the territory.

“Tomorrow, we will be visiting the municipality of Pustec, a small town, which has a special significance to us as a territory where the example of respect and the guarantee of full equality as citizens of the Republic of Albania should prevail,” Rama said.

“Albania will continue to support Macedonia’s membership of NATO as a strong investment in the region’s peace and security. NATO would be incomplete without Macedonia,” he stated.

On his part, Macedonian PM Zoran Zaev said that Macedonia and Albania share common challenges in their aspiration to open the accession negotiations with the European Union.

Macedonian PM hailed the first joint session of the governments of the two neighbouring countries as a strong message to regional cooperation.

“We must contribute to the regional development and implementation of strategic projects. By working on peaceful solutions rather than incitement, we will build the future for Macedonia and the region. This first meeting is more than a message to the region,” Zaev said.

Zaev stated that MAcedonia and Albania share same vision for a prosperous and developed region.

He expressed gratitude for Albania’s strong support to Macedonia’s aspirations to join NATO.

Zaev noted that efficient implementation of the bilateral agreements and identification of the joint projects would help the interaction between the two countries and promote important energy, cultural and infrastructural projects.

EU steps up emergency assistance to people in need in Albania