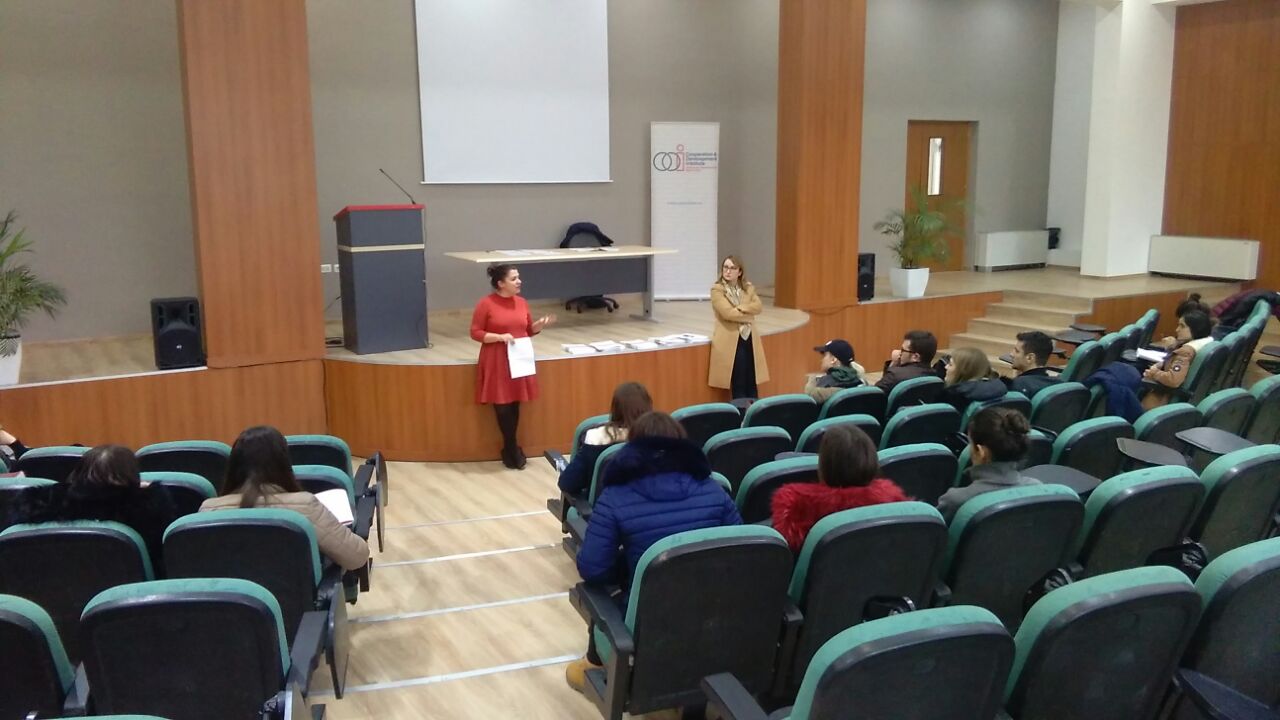 TIRANA – Cooperation and Development Institute (CDI) in collaboration with the Faculty of Law, University of Tirana, held on 15 December 2017, a presentation and an open discussion with students and professors in the framework of the regional project “Progress in Democracy”, supported by the European Fund for the Balkans and implemented by Cooperation and Development Institute in cooperation with Centre for Contemporary Politics.

The authors of the shadow report on Albania presented the main analysis carried out by CDI in relation to the main chapters on the political criteria of the EU integration process, such as Democracy, Governance, Media Freedom, Civil Society, Regional Cooperation. In the absence of the regular EU progress report which normally comes out each year in November, this report comes in time and addresses a one-year monitoring of the above fields from the civil society perspective.

The analysis has been focused on the functioning of democratic institutions and processes, rather than to the specific chapters which make the standard progress report. From the political perspective, two main topics dominated the period of this report, the elections and the justice reform. According to this shadow report, the last elections in Albania, despite being held after a period of a boycott of the parliamentary life from the opposition, were characterized by transparency and inclusiveness.

Nevertheless, some problems were still encountered such as such as the lack of election materials; the presence of unauthorized people in voting centres; sometimes the secrecy of voting was compromised; voting centres did not provide the proper infrastructure for people with disabilities; counting process did not start as foreseen in the law etc.

In reference to the good governance, the authors argued that some of its most important elements like transparency, accountability and public consultation are still at their first steps of implementation and consolidation. With regard to civil society, the legal framework needs still to be revised following 25 years of transition experience of the civil society sector. The National Council for Civil Society is at its early stages of activity and faces difficulties to perform functional duties and to provide for the needs of the sector.

With reference to regional cooperation and the most known recent initiative, the Berlin Process, the authors gave an overview of its achievements in the components of human connectivity, economic connectivity and infrastructure connectivity. They argued that the Albanian Government has been an active promoter of the initiative and in general of friendly neighbourhood relations. Asked by the attendees about RYCO, the authors presented this organization and that of the Western Balkan Fund with seat in Tirana, their objectives and their first call features.

The discussion was followed by questions from the audience regarding democracy applied in practice with reference to recent court verdicts in Albania, the justice reform, the participation of Albania in the Berlin process and the benefits from the regional cooperation, the enlargement of WB6 in one or two groups and what how to apply on RYCO’s projects and open calls.

Eralda Cani, Professor at Law Faculty of Tirana University and former Deputy Minister of European Integration, emphasized how all groups of interests, especially civil society and youngsters need to play in important role in the European integration process, by becoming players and promoting an informed debate on the process.