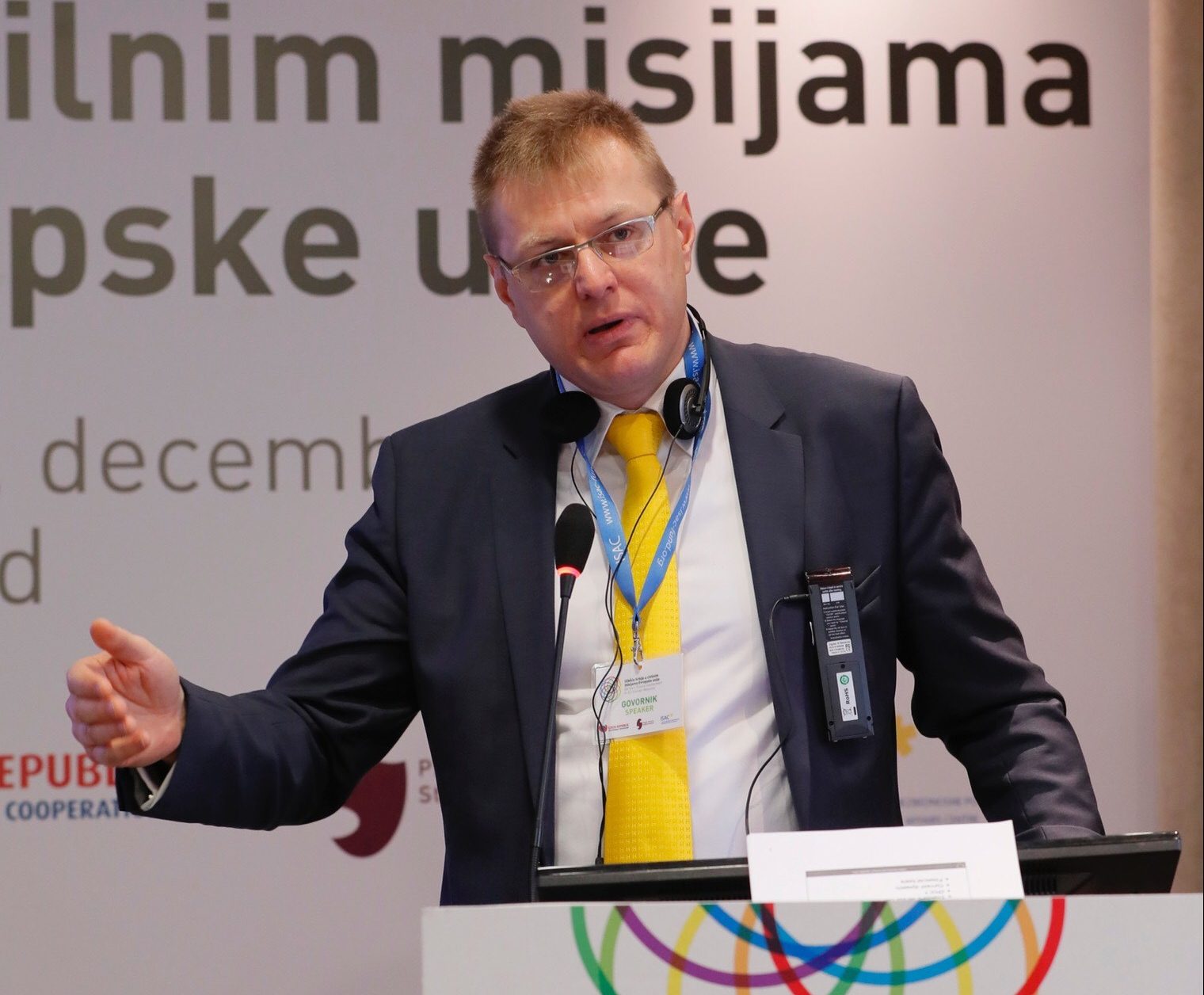 European Western Balkans spoke with Ivo Gombala, Advisor to the Head of Division for Civilian Planning and Conduct Capability of the European External Action Service. The interview was conducted on the sidelines of the conference “Serbia’s participation in EU civilian missions“, organized by the International and Security Affairs Centre (ISAC Fund).

The Conference, held on 14-15 December 2017, as part of the project “Development of Serbia’s National Capabilities for Civilian Contributions to Peace Support Operations”, with support of the Czech Development Agency, dealt with the issues related to building Serbia’s national capacities for civilian contribution to peace support operations and civilian crisis management, focusing in particular on an analysis and the operation of a system of secondment of civilian experts to EU-mandated peace missions, past experiences of particular civilian experts on secondment to civilian missions, and also the results achieved so far by the Republic of Serbia in this field.

European Western Balkans: What is the main difference between civilian Missions and other peace Missions including military?

Ivo Gombala: The main difference is the objective. The civilian Missions per se, concentrate on the civilian aspects of the crisis. The civilian Missions are neither peace enforcing nor peacekeeping. The majority of today’s ten civilian CSDP (Common Security and Defence Policy) Missions focus on capacity building through advising and mentoring. This helps our local partners to take ownership of their rule of law institutions.

We may have individual military or ex-military serving as civilian Mission Members.

EWB: What are the primary fields of acting of civilian Missions and their advantages in post-conflict societies?

IG: Civilian CSDP Missions concentrate on capacity building through advising and mentoring. Thus the Missions form an essential part of the integrated EU effort to build state and societal resilience where deployed. The EU position is that strong and accountable rule of law institutions, underscored by good governance, increase stability and reduces vulnerability to hybrid threats. The civilian CSDP Missions promote stability and build resilience through strengthening rule of law on strategic and operational levels in fragile environments. We are persuaded that there is no long-term stability without peace, economic prosperity and internal security.

EWB: What are the main challenges for the EU when we are talking about civilian missions?

IG: We face sometimes challenges to deploy a Mission rapidly in order to respond both to the crisis and their roots as well as to meet the expectations of our partners’ countries. There is currently work ongoing to fix this. Responsiveness is one of our priority development areas. And we have seen first positive results: The newest civilian CSDP Mission, the EU Advisory Mission for Security Sector Reform in Iraq was launched just one month after the EU Foreign Ministers decision to establish a Mission to answer positively a request by the Iraqi government for support in their civilian security sector reform.  Another challenge is to have the right people in the right place at the right time with the right skills in posts across our civilian Missions. The best experts are usually not unemployed and it takes thus a certain time period to transfer to new positions. New challenges like counter-terrorism and radicalization demand a new set of skills.  We have to define respective policies and recruit the candidates with such skills.

EWB: Did you have a situation that some member states are not willing to invest in developing their civilian capabilities for joining these Missions?

IG: No, there is not a single EU Member State that is not cooperating in some way. This however does not mean that every Member State is represented in every Mission. We are talking here about the Common Security and Defence Policy and  the word “common” means it is the responsibility and shared engagement of all EU Member States.

EWB: Do you have some data on the success of civilian Missions in a reconstruction of post-conflict societies?

IG: It is difficult to have general comparable statistics as the situation in each country is completely different. We are talking about different landscapes and environments. This is reflected in the mandates of the Missions that are different.

One parameter is to observe the development. What was the situation before and what is it now? For example Afghanistan did not have an organised police force 2007 when the EU established a civilian police mission in partnership with the Afghan Ministry of Interior. Today the Afghan police forces muster around 150,000 members and train their higher leadership in their own Police Staff College, which is entirely under Afghan management in Kabul. Significant challenges remain in Afghanistan, but the positive work of the EU Police Mission will be continued by international partners like the UN and NATO.

EWB: What are the benefits for the states that join the civilian Missions?

IG: First of all, the State demonstrates its willingness to participate in responding to crises and to promote stability and peace. For example, Serbia could show to the entire world that it is engaged in rule of law building, in enforcing capacities of partners’ countries and in promoting stability. This is a clear and “readable” business card of Serbia.

In addition, their citizens can acquire experience from working in the international and multicultural environment in Europe and outside Europe. This also represents an added value as these people will be more familiar with the internal procedures of the EU and will contribute to the common European team spirit across the Missions. Such staff also bring back some of that team spirit to their home institutions when they return. In todays interconnected world such experiences and relationships come vital.

EWB: When we look back to the period of the nineties in ex-Yugoslavia, do you think that civilians who already experienced the conflict and post-conflict periods might be of special importance for civilian Missions?

IG: You have some personal experience in this area. You did not study it at the university or elsewhere as you lived it. Such practical experience could be a big advantage in the future, if Serbian citizens were  able to participate in civilian CSDP Missions and thus would be able to share their experience.

IG: Indeed, it is the only Mission with executive mandate. For that reason it is an elaborate rule of law mission with different lines of operation. It played and still plays a very important role in Kosovo. What is crucial for the future is that Kosovo and Serbian authorities need to continue to normalise their relations. The EU plays a key role in that through the EU-facilitated Dialogue and EULEX plays a key role in implementing the Dialogue agreements on the ground.

EWB: Do you think that in post-conflict societies these Missions are a good way to build the rule of law and institutions or each country should do it by itself without external help?

IG: It depends very much on the internal capacities of the country’s institutions to ensure rule of law and good governance and thus to promote peace and stability. Nevertheless, the conclusion as to whether some external help and/or guidance are needed is based on the country’s internal analysis. The entire process is driven by the country itself. All civilian CSDP Missions are based on the invitation of the host country. The impact of the Mission’s activities is very much linked to the readiness of the host country towards the solution of the problems, tackling the roots of the conflict and/or promoting the reforms needed. This cannot be enforced from the outside, this needs to come from
inside, from the country.

Yee: Skopje and Athens have an excellent opportunity to solve the name dispute in 2018

Hristijan Mickoski is the new leader of VMRO-DPMNE