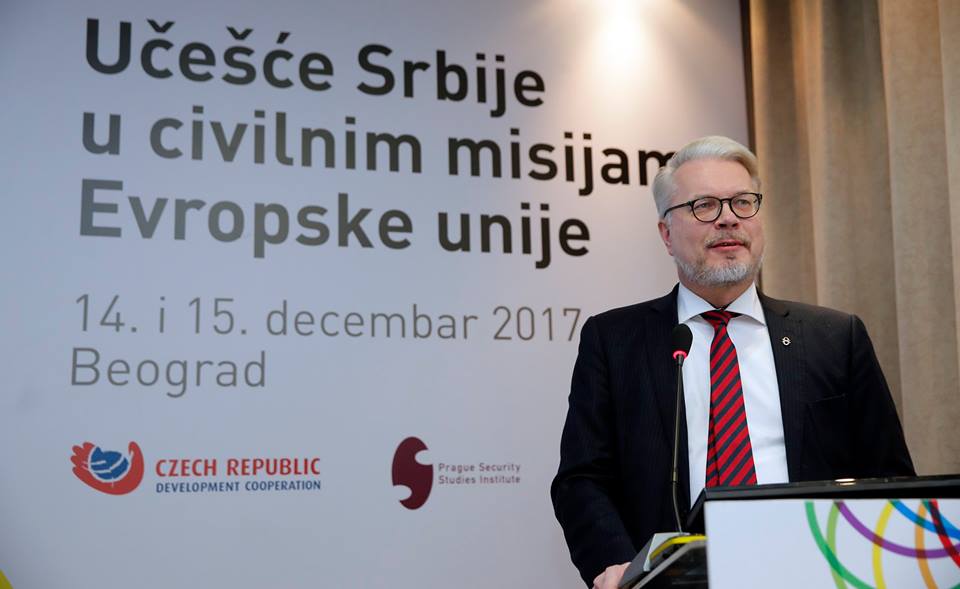 Interview with Antti Haikio, Senior Strategic Advisor, Crisis Management and Planning Directorate at the European External Action Service (EEAS), conducted on the sidelines of the of the conference “Serbia’s participation in EU civilian missions“, organized by the International and Security Affairs Centre (ISAC Fund).

European Western Balkans: How do you see the preparedness of Serbia to take part in EU civilian missions, as it is still working on developing its capabilities? Will it be able to join the missions any time soon, as has been anticipated and announced, among others, by Serbian Defence Minister Vulin?

Antti Haikio: First, we have to remember that, because of the history of the Western Balkans, we are far too much considering Western Balkan countries, including Serbia, as objects, rather than subjects. We tend to forget that Serbia is a sovereign country in the frame of the United Nations and the OSCE and that it is eligible to become a partner and a participating state in other EU or NATO activities.

About the capabilities in Serbia, I know too little. But first, I would say that it is a very welcomed initiative, because the current conflicts, crises and the security environment showed us all that not a single organisation or a single country is able to face the troubles anymore alone. We need more, we need stronger partnerships, stronger international relations, we need some cohesion, we need maybe even strategic planning, so that single countries and unities like the European Union find each other and can start working together. So this is the starting point. Then it comes to building the capabilities, and then after building the capabilities, we can build the capacities, and then find the competencies, and so on.

I would say that there is no doubt that Serbia can very soon and actively start participating in international missions.

EWB: As the EU is not telling its member states how the system should be and it should function, could you maybe reflect on Finland or another EU member state which is small and limited in resources and compare it to Serbia? Whom should Serbia look up to when developing its capabilities?

AH: European countries are all in a very different and individual phase in the development of their capabilities for the participation in international missions. I would say that Finland is in a way an easy case, as we are a small country with a small administration. Therefore, it is easy to create and coordinate mechanisms in a country of five million people, with thin levels and layers of administration and organisation.

But we can learn much from each other and we can adopt best practices from many different countries. Looking at the European Union and the civilian missions and operations, there are close to ten countries that are most active or more active member states than the others are. That means that these countries, which are participating actively in numbers but also in quality, are also the ones who had done the homework first well at home.

So, going for international missions starts always from the system and the national institutions. Finland has one model – we have a law, budget lines, centralised service by one single centre, serving training and logistics to all non-military personnel, meaning both the police officers and other non-military personnel.

There are also several other models, for example, Centre for European Perspective in Slovenia, or Austria with its Foreign Ministry and the Stadtschleining, which is the Peace Training Centre in Austria, German Zentrum für Internationale Friedenseinsätze in Berlin, Folke Bernadotte Academy in Sweden, Egmont institute in Belgium, etc. Even these models, or better say, actors, work closely together. This means that it is never a business of a single country doing things alone – the countries should rather cooperate on these issues.

Then there are countries that, because of their size or resources available for this type of activities, decide rather to count on the neighbouring countries’ facilities and do not establish and organise mechanisms themselves.

Talking about the Western Balkans, I would say that it is normal that Serbia, because of its role, size and its capacities, would have its own functions and its own actors to start cooperating in the international field with others.

EWB: What is the EU currently doing or planning to do in order to assist Serbia and other countries of the Western Balkans in developing capabilities? Already established instruments such as Twinning might be beneficial in this regard.

AH: I think that, at the moment, we are doing very little when it comes to directly supporting the participation in international missions. But indirectly, of course, the EU is doing a lot of things. We are strengthening the police and security sector, the customs service, we are strengthening the rule of law in general and these are the sectors and services where the experts are just taken from the national level to join the international composition. So, even if we are not, at the moment, running directly a programme for building countries’ capacities for the participation, there are a lot of things going on indirectly.

But, as you have referred to Twinning, I would say, yes, definitely, there is a space for Twinning. In addition, I would also mention TAIEX in this sense, a type of funding.

EWB: Could you reflect on other countries of the region? Montenegro has gone the furthest in this respect, as it has already opened the chapter 31, the others are far behind. However, could the post-conflict countries of the Western Balkans that were primarily the objects of the international civilian and military missions offer their expertise and the experience they had gained during a lasting international presence in these countries, i.e. could that be seen as an asset at disposal of the Western Balkan countries who had already experienced international presence?

AH: I can remember, some four or five years ago, we had a visitor in Helsinki from the NATO Training Mission in Afghanistan and he was doing a round in the European countries, Germany, Denmark, Norway, Finland, Sweden, asking for, I think, five police instructors and few border service instructors. And I asked him exactly the same question – why are you doing all the travelling, asking for five? Why don’t you go to Bosnia and ask five hundred? Because for 10, 15 years we have already trained and educated an oversized public administration, a lot of young people with good English skills. They have been trained by the OSCE programmes, UN and the EU programmes, German bilateral, the US and Swedish bilateral programmes, etc. I do not think that anyone else has had so many courses in policing than have police officers had in countries such as Bosnia. And once we had invested a lot of financial resources and human capital, why not then invite the countries to join when we are building missions in Libya, Mali, Niger, or Sudan and South Sudan, Somalia, Iraq, etc. We are not able to do it alone, we strongly need more partners and fellows to work with.

In this sense, your thinking and the logic behind the transition from an object to a subject that is participating actively, is a very welcomed and timely idea.

EWB: Could the joint participation of the Western Balkan countries in the civilian missions aimed at crisis management and peacebuilding contribute to further stabilisation of the region?

AH: Yes, very much. If you know the consortium of the countries called g7+, it is actually a sort of alternative movement of the countries. It was established a few years ago by countries like Afghanistan, Sierra Leone and initially, they were a group of seven, now there are already some twenty, thirty countries. They are those countries where the international community has been operating and they felt like they were completely the objects, lacking their own active and independent role or ownership in the whole state-building process, or institution building process. So it was a kind of critical movement within the international community, established by the countries called by the others “failed states” or “fragile states”.

After the breakup of Yugoslavia and the wars in the 1990s, you have constantly been either partnering country, or rather maybe even targeted by the international action. So, one can easily say that, if someone, you and the countries here know well what are the bad practices and what are even the missing practices of the international community over the past twenty years.

I see that there have to be some strategic changes also in the international thinking when we are still running our military and civilian missions in the countries where peace agreements were achieved 22 years ago, like Dayton Agreement, or 18 years ago, like the one signed in Kumanovo. I would not call it very effective crisis management, as we still need to operate in the Western Balkans, rather than find a type of ownership and shift our resources to places where people are being killed on a daily basis in the Middle East.