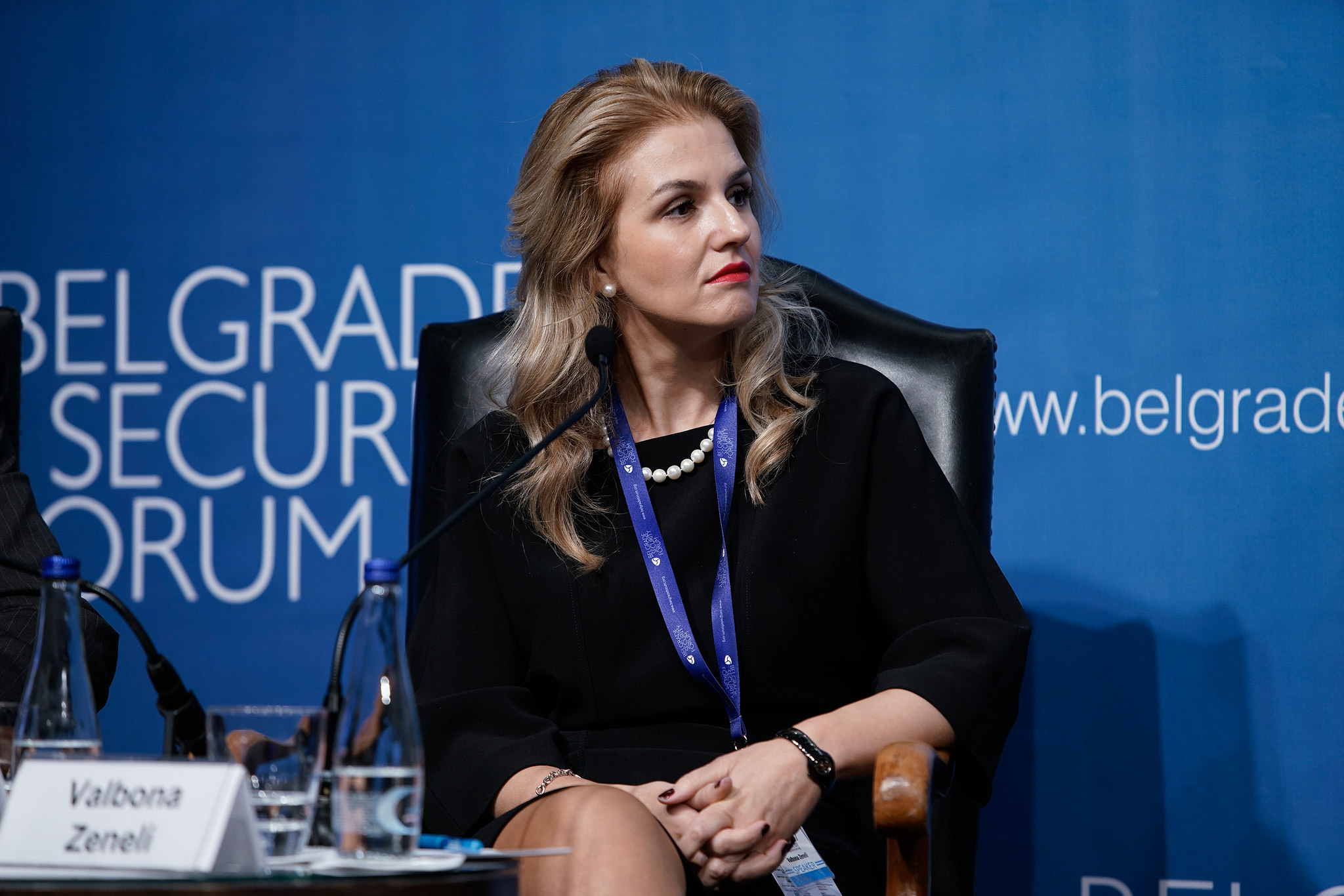 Interview with Valbona Zeneli, Director of the Black Sea and Eurasia Program at the George C. Marshall European Center for Security Studies.

European Western Balkans: You wrote an article (for The Globalist) in which you talked about the migration of the Western Balkan citizens to the EU, especially the young and skilled individuals. How should the countries of the region fight against brain drain?

Valbona Zeneli: Thank you very much for this interview. Let me start by saying that my answers express my personal opinions and not those of the Marshall Center, or the DoD components.

Emigration has always been a fundamental element of the history of the Western Balkans. However, the post-1990s emigration from the region towards Western Europe has been unprecedented in terms of speed, scale, and persistence. In the early 1990s, it was mainly the forced ethnic and humanitarian emigration, with people escaping from the bloody violent conflicts in the region.

Today, emigration of young people is caused primarily by high economic and institutional despair. Let me explain this. The income and institutional differentials between the Western Balkans and Western Europe are very wide, and actually widening. The average income per capita in the Western Balkans is only $4,936 (according to IMF data), which is equal to only 14% of the average income per capita of the EU countries ($34,860). With very low incomes and large levels of unemployment in the Western Balkans, the EU’s attraction is palpable. When it comes to the emigration of skilled young individuals, they exhibit a much greater sensitivity to standard push factors, such as weak institutions, high levels of corruption, and lack of opportunities. Lack of opportunities at home is what makes people leave.

Everyone in the Western Balkans talks about the need for brain gain programs. To tell the truth, in the short-medium term, emigration has been beneficial for the economies of the region because remittances have made up to 10% of the regional average Gross Domestic Product.

It is important to understand that remittances will not last forever, as these young people will create their own families and lives in the West. In the long term, skilled outmigration hurts the region. While the magnitude is still difficult to estimate without reliable data, generally small states are the main losers from the brain drain. The drain of the young and skilled reduces the competitiveness of the region.

When it comes to the leaders in the region and their actions, unfortunately, the more cynical among those are grandstanding on this issue, since they benefit from the reduction of civic engagement and political opposition at home that demands transparency and accountability.

As I have expressed in my article for the Globalist, the solution is a simple two-step strategy:

One, strengthening institutions and economic policies that create the environment that encourages people to stay and have opportunities at home.

EWB: What, in your opinion, are the main security challenges in the region?

VZ: In line with what I explained above, in my opinion, poverty and high levels of corruption are the main security challenges in the Western Balkans. Countries of the region have fallen into the “middle-income trap”. The optimistic era of the rapid growth rates seen in the period 2000-2009 has ended, and the catch-up with the West is stagnating.

Based on current data and forecast, it will take the Western Balkans 25-36 years to double its incomes and more than 50 years to catch up with the EU average. This is a very easy calculation. Economist uses the “Rule of 72” that posits that income and output double at a 7% average growth rate every decade. This means that the countries in the region need on average growth rates of 7% to achieve the income per capita of $ 10,000 in 2027.

On the other side, levels of income and wealth inequality are staggering. Poverty and inequality trigger other security challenges such as violent extremism, social unrest, ethnic tensions, and regional insecurity. All these factors represent threats to the security of Europe as a whole.

EWB: It is known that some countries of the region, such as Serbia and Bosnia and Herzegovina, have a problem with citizen support for European integration of their respective countries. How should we deal with such an issue?

VZ: In my opinion, the EU remains the anchor power in the region. But, it is crucial for the EU to keep its allure alive and not lose its credibility. Other players can sense the vacuum of power in the region, and act as opportunistic spoilers using internal institutional weaknesses.

It is very problematic to me, that, according to recent Balkan Barometer data, only 39% of people in the Western Balkans think EU membership is a good thing, while a large number (36%) have a neutral opinion. Only Albania and Kosovo are exceptions. Even more dangerous is the wrong-headed form of nostalgia about the Communist past being better than the challenges of today.

The overriding problem with the prevailing pessimism is that wholly independent of the question of EU membership, this languishing does not encourage economic, political and social reforms. Scapegoating the EU for the lack of serious reforms internal reforms is not fair.

I think policymakers both in the region and in the EU institutions need to pay very serious attention to these negative trends. Well-formulated strategic communication policies and strategies need to be put in place and seriously implemented.

EWB: Do you think the Berlin process will have satisfactory effects when it comes to bringing the countries of the Western Balkans closer to the EU?

VZ: I think that the Berlin Process has been crucial for a renewed EU engagement in the Western Balkans. Despite a recognized degree of enlargement fatigue in the EU, the Western Balkans have not disappeared entirely from the radar. Countries, such as Germany are trying to keep the process open, with initiatives such as the Berlin process aimed at sending a message of support and reaffirmation for the European future of the region, by fostering economic cooperation and political stability within the region. The main challenge I see here is the lack of clear timelines.

This renewed engagement in the framework of the Berlin Process is meant to prevent further damage from the “reform fatigue” that already manifests itself in the region, but also to respond to increased external influence in the region.

While each of the seven rounds of enlargement of the EU had different motivations, the underlying motive has not changed: securing Europe. This will be the EU’s Litmus test in the Western Balkans.

During the fourth and latest round of Berlin Process Summit, held in Trieste last July, a “Connectivity Agenda” project was approved for the Western Balkans, for a total of EUR 1.4 billion for 20 different investments. I don’t know if this amount of money is enough to help infrastructure development and the creation of a real regional market.

I’m happy that the Berlin Process addressed the issue of regional economic integration of the Western Balkans, which is an imperative. The starting point towards better cooperation would be to acknowledge the fact that countries in the region are too small and weak individually to generate the sufficient scale and capacity that will attract foreign investment and strengthen competitiveness. Currently, the whole region attracts less than 0.9% of the stock of the world total (Croatia included). There is very little interest from the EU countries, who are the main investors in the global economy, to invest in a region burdened by issues of weak governance, and high levels of corruption.

In my opinion, the Western Balkans needs a new type of a “Marshall Plan” to speed up its economic and institutional development. It has to come to one main condition, to make the economic and technical aid available only if countries are really committed to collaborating with each other.

EWB: How do you see the development of the Albanian integration process after a series of incidents pertinent to corruption and organised crime? To what extent did it impede Albanian efforts to launch the negotiation process?

VZ: With all the problems that I mentioned above, the region has also made some positive progress. Albania, together with Croatia and Montenegro are NATO members. This is a big achievement for the security of the region.

Albania has been an EU candidate country for few years, but issues that you mention such as high levels of corruption and organized crime are holding the country back in advancing in the opening of the negotiations. A few months ago, Albania was also involved in a long political stalemate on elections, and I can say that this has been a feature of Albanian politics in the last 20 years: internal political conflicts. With the help of the U.S. and EU diplomacy, the political crisis was solved.

Albania is an example where the U.S. and the EU are working together in pushing the judiciary reform in the country, which is crucial for the fight against corruption and advancing democracy in the country. Success or failure will be determined by the real commitment of political leaders (from all sides) in the country. They should miss the train this time.

EWB: How do you assess the state of democracy in the countries of the Western Balkans and do you believe the term “stabilitocracy”, which is more and more often heard within a public discourse, to be more realistic?

VZ: Twenty-five years after the start of the transition process in the region, the argument can be made that formal democracy is in place, but much of its substance is absent, including a political culture based on trust. According to the Economist Intelligence Unit’s Democracy Index of 2016, countries in the Western Balkans rank very poorly. They are classified as “hybrid regimes”. Yes, they have electoral democracies, but allegations of election rigging are common, and transitions of power are rarely smooth. While blatant election-day voting fraud is not the case anymore, strategic manipulation of elections is becoming a norm, craftily tilted to influence the playing field. As a result, there is a widespread apathy and suspicion that elections have become a fool’s game. Doubts are raised that the “Balkan-type” democracy is more about power games, which has created a wide gap between elites and citizens. Unfortunately, the rise of illiberal democracies, political polarization and populism, especially in Central Europe sends the wrong messages to the Western Balkans.

It is important for the EU not to allow “stabilitocracy” to be deeply ingrained in the society, prioritizing stability over democracy. The EU should engage more actively with the civil society to invite bottom-up reforms and must be uncompromising in the promotion of rule of law, good governance, and the development of strong institutions. This is the foundation that will lead to economic opportunities in the region. I think that the EU should focus on empowering the young people, and support free and independent media to pressure their leaders for positive change. Crucially important, political elites in the region need to be more seriously committed to the European core liberal democratic values.