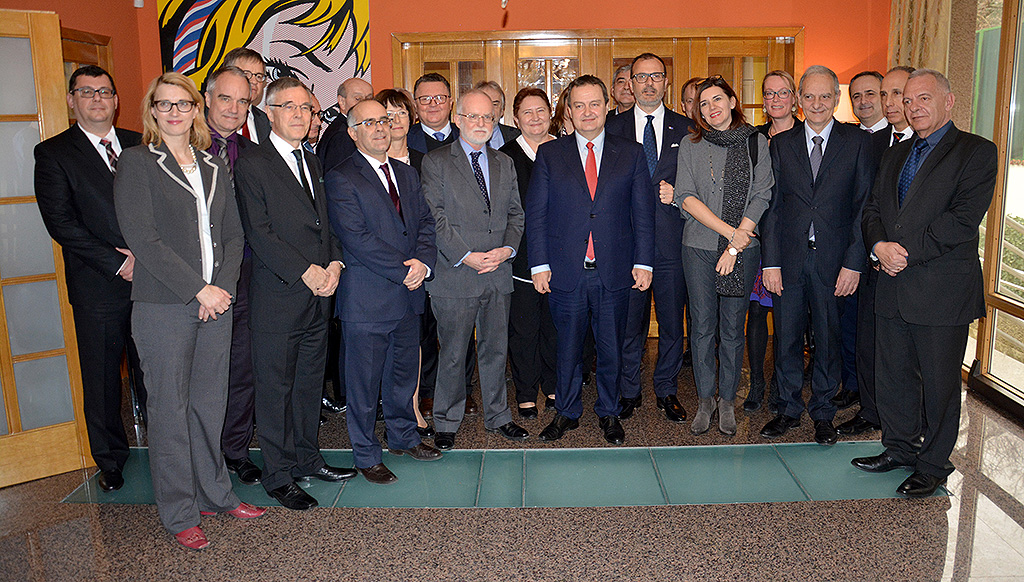 BELGRADE – First Deputy Prime Minister and Minister of Foreign Affairs of the Republic of Serbia Ivica Dačić attended today, as the keynote speaker, a lunch with the Ambassadors of EU Member States, hosted by the Head of the EU Delegation to Serbia, Sem Fabrizi.

On this occasion, Dačić pointed out that the Serbian side was committed to the Belgrade – Pristina dialogue, but that the talks would, however, continue when it is provided with concrete information about the assassination of Oliver Ivanović.

In this context, the announced EU Enlargement Strategy should present in a concrete form the positive and encouraging messages conveyed by the President of the European Commission, Jean-Claude Juncker.

The Minister expressed his belief that 2025 having been announced as the year of potential next enlargement would have a highly positive impact on the citizens’ support to European integration, at the same time demonstrating that European countries considered Serbia their future equal partner within the Union.

He welcomed in particular the decision by the Bulgarian Presidency of the Council of the EU to host an EU-Western Balkans Summit in May 2018, which clearly indicated that the focus was on the Balkans again.

Furthermore, he expressed his hope that the European Commission’s next Progress Report on enlargement would acknowledge the progress achieved so far and recognize the efforts made and work done by Serbia towards comprehensive reforms.

European integration is supported by 52% of Serbian citizens

EU: Local elections in Macedonia give a clear mandate to new mayors