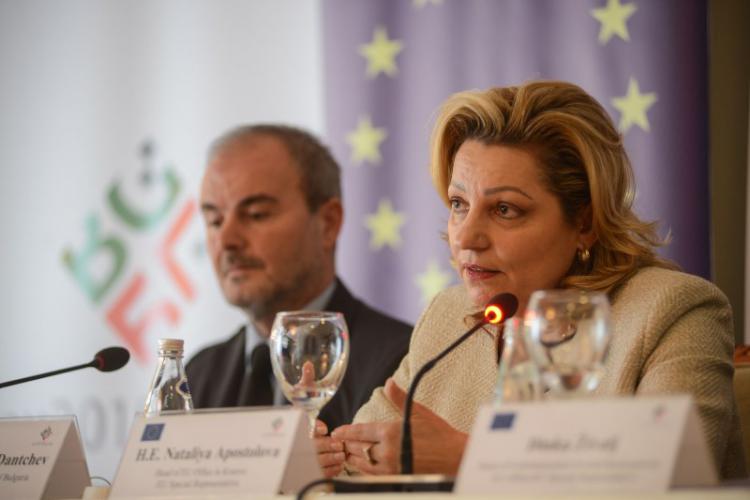 PRISTINA – I am very happy that a clear and credible European perspective for the Western Balkans is a strong priority of the Bulgarian Presidency. This priority focus on the Western Balkans could not be timelier, said Nataliya Apostolova, Head of the EU Office in Kosovo/EU Special Representative, at the presentation of priorities of the Bulgarian Presidency of the Council of the European Union.

She emphasised that the Presidency plays an important role in the European Union as a driving force on key internal Union competencies in areas like the economy and finance, energy and the environment.

“On all areas of Union competencies the Presidency helps steer the Union. The Presidency sets the pace and the agenda of our common work on these EU policy areas. This is a crucial time for the European Union, with preparatory talks on the new EU Multiannual Financial Framework already in full swing,” said Head of the EU Office in Kosovo.

She also explained that this is a crucial time for the Kosovo-EU relations.

“With the upcoming EU’s Western Balkans Enlargement Strategy in February, the presentation of the Kosovo Report in April, and the EU Summit on the Western Balkans in May in Sofia, Kosovo has an opportunity to demonstrate its commitment to European values and present a positive image to the rest of the Europeans,” Apostolova said.

When it comes to the Enlargement Strategy, she said that Kosovo has a chance to influence it by doing the right things.

“Kosovo must use this unique window of opportunity. It should ratify the border demarcation agreement with Montenegro. This would be a real signal that the Assembly works in the interest of all in Kosovo. The demarcation agreement should be ratified as a matter of national interest to stop the self-isolation of Kosovo and move beyond personal interests of some political circles,” she said.

However, she believes that Kosovo has made many advances over the past ten years.

“What is important for the Kosovo people is to have institutions work for the people. And people here still do not trust the institutions. This is why international support is still needed. In judiciary, rule of law and elsewhere,” Apostolova noted.

On the initiative to abrogate the Specialist Chambers, she pointed out that this is not a good way to go.

“An attempt to annul an international commitment is not the way to build institutions. Nor is it a way to strengthen the people’s trust in them. I hope the politicians will realise this sooner rather than later,” she said.