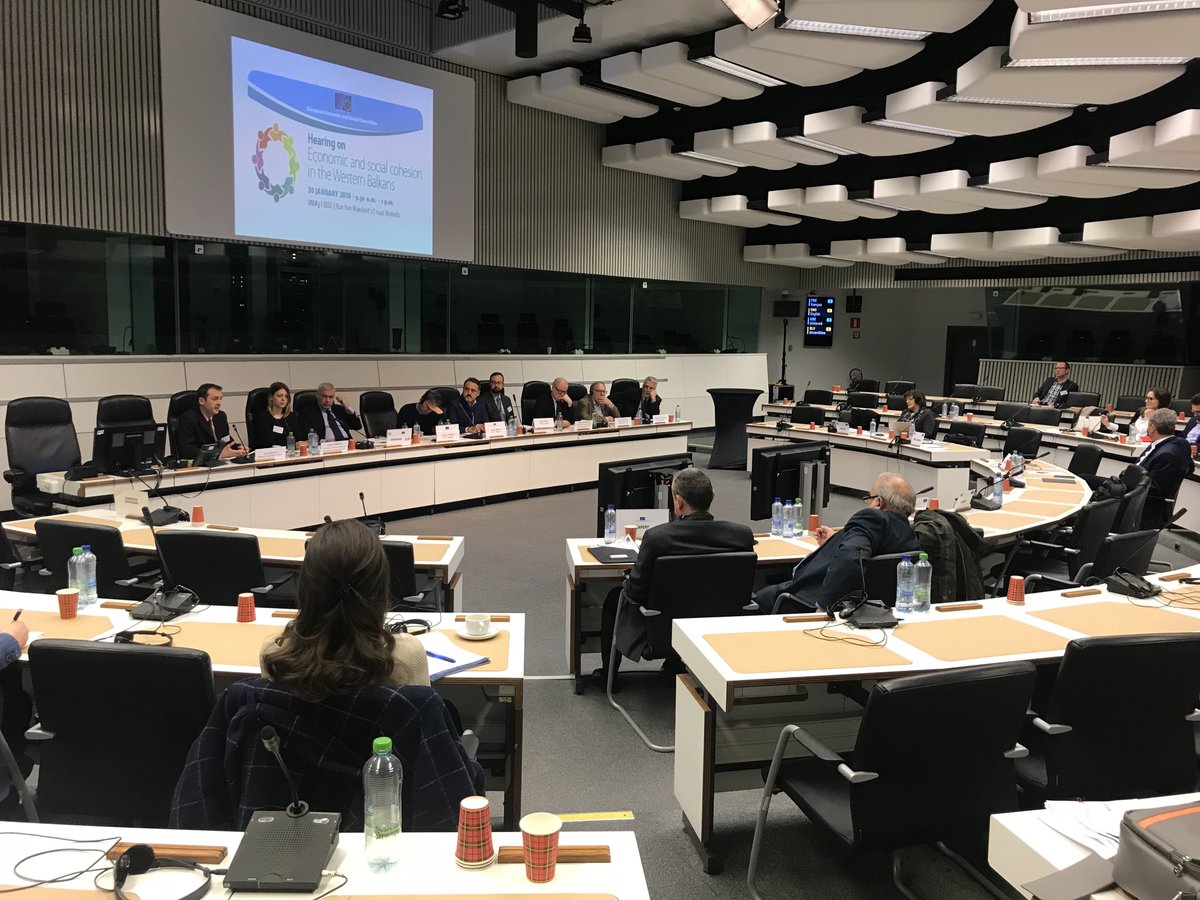 At the request of the Bulgarian presidency of the Council of the EU (January-June 2018), the European Economic and Social Committee (EESC) was asked to prepare an exploratory opinion on the challenges and priorities countries of the Western Balkans are facing in the European integration process, as well as in the area of economic and social cohesion. Western Balkans will be one of the policy priorities of the Bulgarian presidency and a Western Balkans Summit is scheduled to take place in May 2018 in Sofia.

The event was moderated by the President of the EESC’s study group on Economic and social cohesion and European integration of the Western Balkans, Ionuţ Sibian.

The Ambassador, Head of Liaison Office of the Regional Cooperation Council (RCC) on Regional Economic Area, Vasselin Valkanov, talked about the rule of law, economic governance and public administration reforms as the three pillars necessary to improve social and economic cohesion.

However, to achieve results, both the EU and the Western Balkans need honesty, integrity and consistency, continued Valkanov.

The RCC has been monitoring, reporting and coordinating on four main components of development: trade, investment, mobility, and digital integration, and Valkanov explained how they are working together with the Western Balkan countries to successfully reach the first important results in 2020.

As the Team Leader of Employment and Social Affairs Platform (ESAP) project of the Regional Cooperation Council (RCC), Nand Shani, stated: “67% of people in the Balkans identify unemployment as the biggest problem for the region”.

According to Shani, the Balkan region needs better labour market policies, including work investments, digitalization, and especially innovation which is a key aspect of economic integration.
“It is important that the region is able to attract long-term investments”, stated Senior Adviser at BusinessEurope, Sofia Bournou,

For this reason, BusinessEurope is working on support horizontal legislation and management, and on reinforcing the capacity of business employment to ensure a stable and predictable environment suitable for investments, Bournou explained.

Lead Economist for Eastern Europe and Central Asia Region, World Bank Group, Ekaterina Vostroknutova, showed the results of the World Bank Group report “The Western Balkans: Revving Up the Engines of Growth and Prosperity”, including the need for a revised growth model because the convergence with the EU in living standards has been slow since 2008.

Vostroknutova underlined the urgency of reforms to speed up convergence and to increase regional and global integration.

The connections to the European value chains would be a stepping stone for productivity growth. Thus, increasing welfare for everyone will require that more people engage in the labour market and find jobs. This can be done by correcting incentives in the labour market regulations, taxes, and social protection, Vostroknutova added.

Deputy Director, Country Economics and Policy, European Bank for Reconstruction and Development (EBRD), Peter Sanfey, discussed some serious concerns about unemployment which remains very high, and competitiveness and governance that are especially weak.

An important problem is the perception that political connections are the main way to succeed in life, Sanfey said.

He also stated that “in the Western Balkans there is strong convergence potential, but convergence is happening only slowly”

“The region is beginning to recover from the long recession, but growth is lower than in the pre-recession period, and economic recovery is unevenly spread across the region,” said the Coordinator of the LSEE Research Network on Social Cohesion in South East Europe, William Bartlett.

Therefore, according to Bartlett, policies aimed at attracting foreign direct investment (FDI) based on incentives in special economic zones (SEZs) are of crucial relevance for the Western Balkans economies because they create new skilled jobs.

Consequently, direct employment effects have been strong in Serbia. In fact, SEZ jobs increased from 14,500 in 2012 to 25,000 in 2016, and for every job created by FDI, about 4 to 7 jobs are indirectly created in the local economy, he added.

Bartlett concluded listing some solution to increase social cohesion. For example, it is necessary to improve the education system to deal with skills gaps and skills mismatches. Moreover, it is essential to support local supply chains and upgrading the skills and technological capacity of SMEs and to support inclusive growth by increasing tax systems.