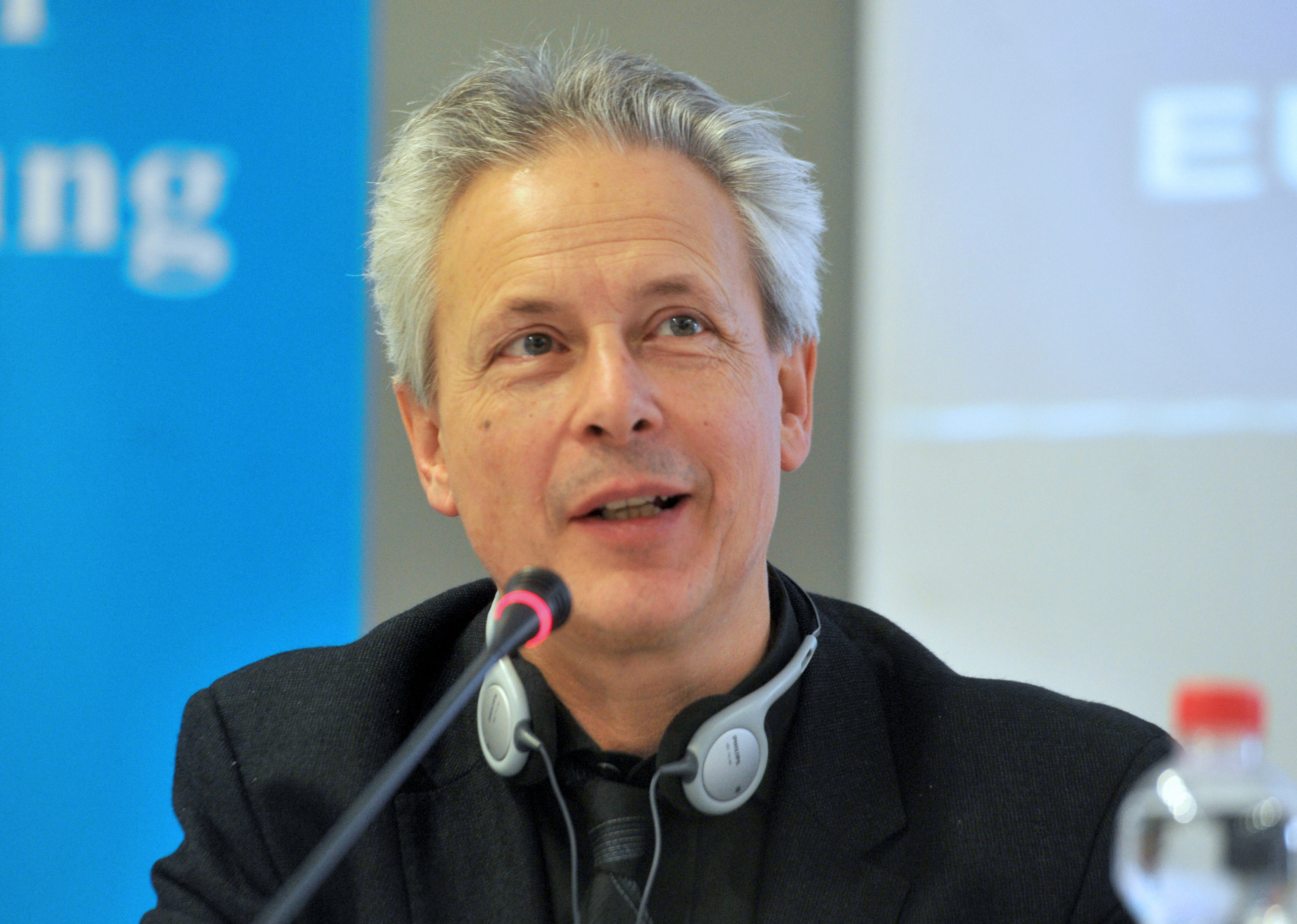 Interview with Dr. Klaus Fiesinger, Regional Director for Southeast Europe of Hanns-Seidel-Foundation. The interview was conducted on the sidelines of the conference “EU Strategy for Successful Accession of Western Balkans and EU Neighbours – Case of Romania”, which was organised by the Center for Foreign Policy and Hanns Seidel Foundation, and took place in Belgrade on Wednesday, 7 February.

European Western Balkans: Could you tell us what are the main areas and issues that the Hanns Seidel foundation focuses its work on in Southeast Europe?

Klaus Fiesinger: Aiming at constantly improving regional stability and security, enhancing neighbour solidarity and deepening democracy and rule-of-law are project activities which are realised by some twofold approach of the Regional office for Southeast Europe of Hanns-Seidel-Foundation. These two approaches are state-related and interregional.

According to the national approach is following to mention: democracy, rule-of-law development and internal security of states in the South-Eastern European region are mutually dependent on each other and demand comprehensive activities. Our project work is focused therefore primarily on the sector of administration, police, and judiciary, in particular on reforms of local administration as a pillar of democracy.

Education and advanced training of experts and stakeholders of the above-mentioned sectors are designed to contribute to a transparent and citizen-oriented administration.

In addition to this just in Serbia, we support the administrative staff of the Negotiation team for the EU-accession which is dealing with preparing and conducting the contents about the topics of special chapter negotiations. And even more, all our efforts with central or local state institutions are enhanced by our activities on the NGO-sector with youth organisations, universities or scientific think-thanks.

Especially according to the current problems of poverty migration from the Western Balkans to Western Europe we are dealing not only with the consequences but also with the causes of this poverty migration. So with our local project partners, we try to improve professional and social competencies according to the youth in order to create realistic prospects for the future and therefore to avoid the tremendous brain-drain. It must be found solutions according to employment possibilities and perspectives on the labor market to enable young professionals and academics to remain in the country and not leaving to abroad.

According to the regional approach is following to mention: in respect of maintenance and promotion of stability, peace and mutual tolerance we support cross-border activities in the WB6 region on several levels. So for example, border police cooperation to manage illegal migration and organised crime. Or for example, cross-border municipality cooperation to promote infrastructure projects. Cross-border regional seminars for young diplomats or at the university level shall furthermore elaborate regional strategies. Especially youth interrelation exchange is hereby to emphasize as the most decisive project within the so-called „Berlin Process“. So we support the activities of the last year founded Regional Youth Cooperation Organisation in Tirana, called RYCO. For example, we initiated some cross-border internet platform where is given the possibility of networking and getting in contact with all youth organisations in the region. We started last year with bilateral contact between Serbian and Albanian youth organisations and we plan to enhance and enlarge this platform this year regionally.

EWB: How do you rate the progress that the countries of the region have made in these areas in the last few years? What are the major achievements and where do you see the gravest shortcomings?

KF: Obviously has been visible progress in the region of WB6 since the last years according to democracy and rule-of-law and also in the administration sector. But of course, this progress is not yet enough, it is an ongoing process to be continued. Generally speaking, I see the main achievements in the meanwhile strong ambition and willingness to implement reforms.

Without mentioning any sector in detail I see the gravest shortcomings just in the lack of real implementing capability.

EWB: How do you see the state of security in the Western Balkans and what are major security-related challenges in the region?

KF: At the moment the state of security in the Western Balkans appear to be in a good position. Otherwise, there should be considered that some real danger might be coming by radical Islamic infiltration into some WB6 states, especially to Bosnia and Hercegowina, with possible attacks of extremism and terrorism. At the moment this is some frightening scenario in theory, but in case of concrete happening, it could lead to destabilisation not only of the respective country but of the whole region.

Some additional danger of lack of security I see in the not yet finally solved ethnic rivalries. Peace was and is a fragile element in the WB6 region.

EWB: Serbia and Montenegro are the only Western Balkan countries to receive a clear timeframe on the possible accession to the European Union by 2025, whereas this was omitted in case of other countries in the region. Do you think that the timeframe foreseen by the Strategy is in line with the capacities and capabilities of Serbia and Montenegro? And what about the rest of the Western Balkans, do you think that FYROM and Albania could fulfil the requirements and have the accession negotiations launched anytime soon and how do you see the prospects of BiH and Kosovo becoming candidates in the nearest future?

I cannot look in the future but I believe that both countries, Serbia and Montenegro, are willing and able to manage their tasks until 2025. What do I think about the rest of the countries? This is, of course, dependent on different difficult matters. According to Macedonia (FYROM), there will be some questions if there will be a solution of bilateral Greek-Macedonian conflict about the country name. According to Albania, the question will be if there is some transposition capability to implement the already parliamentary ratified reforms in the judiciary to practice realisation. Furthermore, if Albania is able and willing to reduce the tremendous drug delivery export and to contain state corruption. We will see if, as it is expected, during the Bulgarian EU- presidency both EU candidate countries Macedonia and Albania will get some invitation of the EU Commission for the concrete start of negotiations.

EWB: The EU seems to have assumed a tougher stance when it comes to the requirements in relation to the rule of law, as outlined in the Strategy. Shall we expect the EU to be a hardliner with regard to the issues concerning the rule of law, judiciary, corruption, etc. and to use the ’carrot and stick’  approach more frequently to induce prompter reforms?

KF: The new Strategy from the European Commission according to WB6, officially introduced on 6th of February in Strasbourg, is emphasizing that the accession of WB6 countries to EU is in common interest relating to the internal and external policy as well as relating to security and economy. However, it must be clear that EU should export to WB6 stability and not import from WB6 instability. So the EU must and will already define the progress in rule-of-law, judiciary and corruption combat as inevitable conditions which have to be regarded in any case.

EWB: Bulgaria had revealed its ambition to focus its EU presidency to the Western Balkans and its integration into the EU months before actually assuming the Presidency of the Council of the EU. What do you expect from Bulgaria’s efforts to promote the EU enlargement in the Western Balkans and what is to be expected at the EU-WB conference in May in Sofia?

KF: Bulgaria which has just now the function of EU presidency and chairmanship has been meanwhile eleven years member of the European Union. Bulgaria as an Eastern Balkan country knows and understands very well the situation and the current problems of WB6. Bulgaria regards its function as some special advocator and promoter of the WB6 region and I am convinced that this is not only a declaration which was mentioned at the beginning of the presidency but also a strong target and task. Bulgaria feels committed to the WB6 and there was already in last autumn some visible example when Bulgarian government invited some neighbour Balkan states to Varna to find common solutions for regional sustainable stability.

It is very important to keep the Balkan region in focus of interest and attraction and this not only in times or situation of some crises.

Let me end with some quotation of Federica Mogherini, the High Representative of European Commission for Foreign and European Affairs, who mentioned in one of her speeches, that „WB 6 is not only the backyard of Europe but Europe itself“. Peace in the Balkan region means peace in Europe.

BiEPAG Policy Brief: Trust in the democratic process can be regained