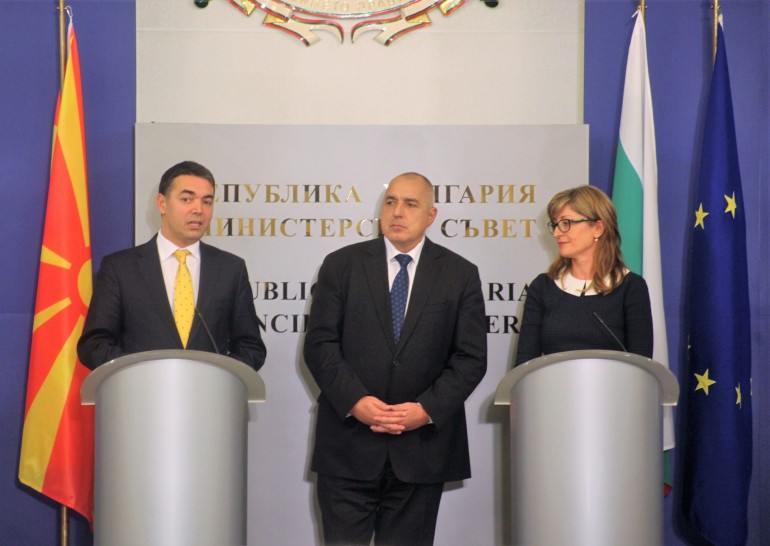 SOFIA – The ministers of Foreign Affairs of Macedonia and Bulgaria, Nikola Dimitrov and Ekaterina Zaharieva, in the presence of Prime Minister Bojko Borisov, have exchange the ratification documents of the Agreement for friendship, good neighbourly relations and cooperation and have signed the Protocol of their exchange, with which the Agreement has entered into force, informs the MFA.

“I think that with this example, where in a period of several months we have managed to accomplish such a turnout, in a way, we are giving hope and courage that the Balkans is Europe. And we are hoping that this positive energy will affect other issues that are still open,” said Dimitrov.

Zaharieva stressed that the results from this Agreement were visible even before it entered into force.

“The results from the Agreement are visible, the rise of the goods exchange of 11% and the tourism of 10%,” said Zaharieva.

According to the Bulgarian Prime Minister Borisov, this example should be followed by everyone in the Balkans.

“If Skopje and Athens show courage, and our friends Tsipras, Mitsotakis and Zaev find a joint solution for the name dispute in the forthcoming months, the situation will head in a very good direction for everyone. We can now cross our fingers for the dispute to be resolved. Bulgaria will only be constructive,” said Borisov.

Gabriel: Solution for ties with Pristina in citizens’ interest