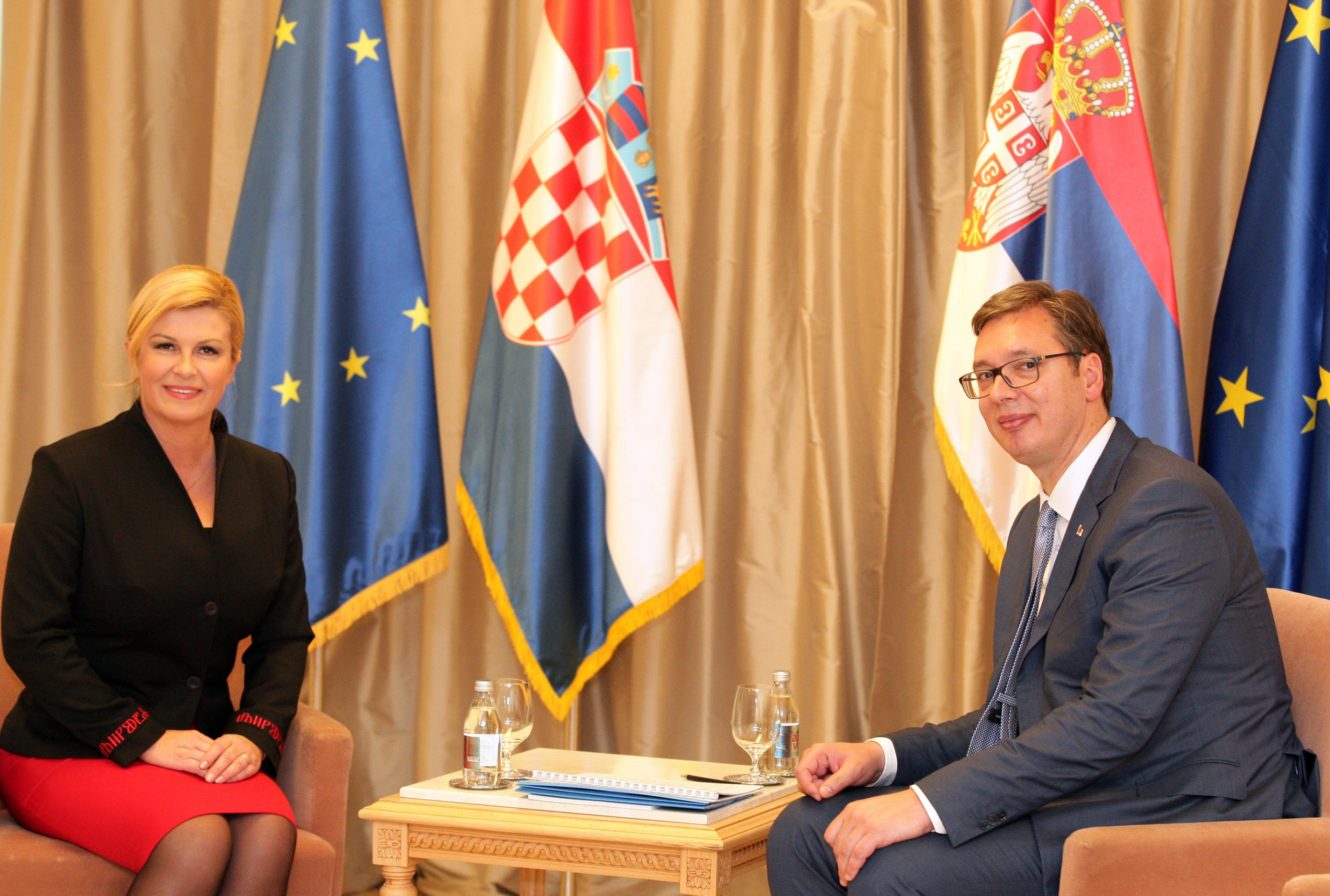 Last week, both presidents of Serbia and Croatia had an opportunity to talk after the weeks of tensions between these two Balkan countries. Serbian President paid his official visit to Croatia where he met with his counterpart, Kolinda Grabar Kitarović and other high-ranked officials including Andrej Plenković, the Prime Minister of Croatia. At the same time this was the first official visit by Vučić as the Serbian President, and previously he had met Kolinda Grabar Kitarović almost two years ago in Serbia when they signed the Subotica Declaration on improving relations and solving open issues.

Since the signing of this declaration to date, things have not changed much, and this seems to be the biggest crisis in the relations of the two countries since the borders were blocked during the migrant crisis. It is important to notice, after the establishment of good neighbourly relations during the mandate of Boris Tadić in Serbia and Ivo Josipović in Croatia, relations between the two countries have been in an exponential decline since 2012 when there was a change of governments.

During 2015 and 2016, these relations were particularly disturbed by mutual accusations and pre-election campaign that was run both in Croatia and Serbia.

In order to stop the escalation of verbal war, Croatian President Kolinda Grabar Kitarović called on Serbian President Aleksandar Vučić to visit Zagreb in February in the midst of intensified relations between the two countries due to mutual accusations over the Jasenovac exhibition organized by Serbia at the United Nations Headquarters in New York. In very tense relations and a strenuous atmosphere, Vučić visited Zagreb, but despite the great expectations of this visit, the impression is that nothing significant is neither agreed nor resolved. However, both presidents after the meeting agreed that Serbia and Croatia need to have better relations in the coming future.

The issue of good relations is especially important for Serbia and its EU accession process, which is also emphasized in the latest European Commission’s enlargement strategy presented at the beginning of the month. Also, Maja Kocijančič, Spokesperson for EU Foreign Affairs, stated that ‘good neighbourly relations and regional cooperation are very important, which is emphasized in the strategy and any steps that lead to improvement in this area are welcome’.

Despite numerous open issues, the two presidents agreed that they should work on improving relations. President Vučić underscored that ‘for the future of our people, we have done a good job and when it comes to the future, we have no opposing interests in any field’.

Also, Croatian President said that it is obligation both of Serbia and Croatia to meet and talk and find common interests, adding that the two countries had a ‘common responsibility for the future of Southeast Europe’. These messages are important in terms of relations between Serbia and Croatia which are considered key for peace and stability in the region.

One of the urgent issues between Serbia and Croatia is Danube river border which, claimed by Vučić, will be resolved in the next two years, or taken to international arbitration. When presenting the enlargement strategy, President of the EU Commission Jean-Claude Juncker stated that ‘there are still bilateral disputes between countries in the region which remain to be solved’. Also, Juncker underlined that the EU will not allow importing those disputes and the instability they entail, adding that ‘binding solutions to disputes with neighbours must be found and implemented before the country accedes’.

Beside the dispute over Danube river, another issue that attracted a lot of attention in Croatian media was war compensation that Serbia should pay to Croatia. It was the main thing discussed by Prime Minister of Croatia and Serbian president, but they did not agree on that issue. As Vučić said, he had a completely different attitude from him. They also talked about minority rights both of Serbs in Croatia and vice versa. Serbia’s President visit to Croatia was seen also as an attempt to boost economic ties.

Kolinda Grabar Kitarović agreed that ‘it is necessary to facilitate cooperation between two countries and business communities in every way possible’, adding that she is pleased ‘to be able to confirm common desire to improve economic cooperation’.

Finally, before and after this visit, it seems that the most of the problems are based in the internal politics both of Serbia and Croatia. Namely, playing on the nationalistic card, it is the easiest way to win political points. But, consequences of playing with nationalism will be sooner or later translated into foreign policy. Now it remains to wait and see if Serbia and Croatia will succeed to restrain their political officials from flammable statements at home, as it was proposed after the meeting between two presidents.

Preda: BiH cannot join the EU with this level of corruption