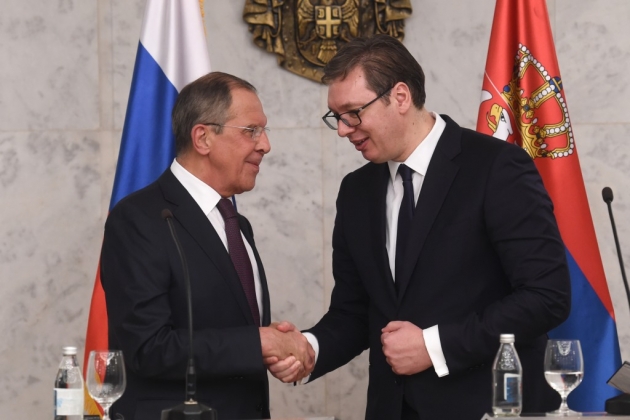 Sergei Lavrov, Minister of Foreign Affairs of Russia, visited Belgrade last week on the occasion of the 180 anniversary of the establishment of diplomatic relations between Serbia and Russia. During his visit, Lavrov met with his counterpart Ivica Dačić, and then with President of Serbia Aleksandar Vučić and Prime Minister Ana Brnabić. Lavrov used this visit as an opportunity to confirm excellent relations with Serbia, but also to send a message to the West as he urged the EU not to force Serbia to sever its alliance with Russia.

It is well-known that Belgrade is balancing between Russia and West as Serbia is trying both to achieve its top priority interest – EU membership, but also to bolster its traditional ties with friendly Russia. Here, Russian Minister Lavrov warned that trying to push Belgrade into signing up for sanctions against Russia would be to repeat the mistakes the EU made in pushing Kiev westwards. Also, Foreign Minister welcomed Serbia’s wish to join the EU but underlined that Moscow would remain engaged with Serbia no matter what happens.

Moreover, Lavrov’s visit to Serbia was an opportunity to decorate Minister Dačić with the Medal of Pushkin for making a considerable contribution to strengthening cooperation and friendship with Russia. This medal represents recognition of Dačić for being a close ally of Russia in Serbia, as Dačić is one of the loudest advocates for deepening relations with Russia. Both foreign ministers agreed that they are satisfied with current state of cooperation, adding that it is a strategic partnership between two countries.

“I am very grateful for the continued support of Russia in terms of territorial integrity and sovereignty of Serbia, it is well known that Russia vetoed an attempt to accuse the Serbian people of genocide, and there is understanding for Serbia’s position in terms of one-sided proclamation of Kosovo’s independence,” Dačić said.

Also, foreign ministers discussed the pressure that is blowing from the West and the attempts of the West to seize Belgrade’s interest in European integration ‘in order to force Serbia to follow the anti-Russian position’, Dačić commented. Russian Minister Lavrov agreed when saying ‘our country, like Serbia, is becoming the subject of open pressure’.

Furthermore, Lavrov added that the situation in Europe “is not healthy” due to some NATO and EU members trying to intensify confrontation, citing an example of Montenegro’s entry into NATO, assessing that this is being done in Macedonia and Bosnia and Herzegovina.

Beside Lavrov’s more than friendly meeting with Minister Dačić, he also met with Serbian President Vučić. At a news conference with President Vučić, Lavrov underscored that ‘Russia always wanted partners to have a free choice and develop their political ties’.

Speaking of pressure, Vučić told that ‘there will be different wishes and pressure for those relations to go in the opposite direction, but Serbia will stay on the same line’. Also, Vučić underlined that despite Serbia’s European path, it will continue to build the best relations with Russia.

When it comes to financial sanctions on Moscow, Vučić reassured Lavrov that Serbia will never impose sanctions against the Russian Federation, as the US and the EU have done after Russia’s annexation of the Crimean Peninsula. Also, Lavrov said that ‘neither Russia nor Serbia is imposing anything on each other’. Russian Foreign Minister concluded by saying that ‘Serbia is determined to keep its neutral status’, which he finds to be crucial for stability in the Balkans.

On the second day of the visit, Sergei Lavrov together with Serbian President Vučić attended a mosaic presentation at the Saint Sava Temple in Belgrade. On this occasion, Vučić especially thanked the President of Russia Vladimir Putin, ‘without whom Serbia would not do almost anything in the temple’. But, today, ‘it is up to us to finish this temple’, Vučić said and pointed out that the Temple of Saint Sava is another symbol of the brotherhood of the Serbs and the Russians, but also that the temple should be a strong root of friendship with Russia.

Finally, speaking about Serb-Russian friendship, Foreign Minister Dačić said that ‘you can buy everything in the world except friendship of two nations and states,’ therefore long live the brotherhood of Serbia and Russia’. Once again, Dačić spoke about putting the pressure on Serbia for some benefits Serbia might have in terms of negotiations with the EU, but he was explicit that Serbia will never lead anti-Russian policy.

After the EU enlargement strategy was presented in Strasbourg a few weeks ago, Lavrov’s visit to Serbia, close ally of Russia, might be seen as another attempt of Kremlin to send a message to the West that Russia still matters in the region even though Western Balkan countries are showing their efforts to become the EU members.