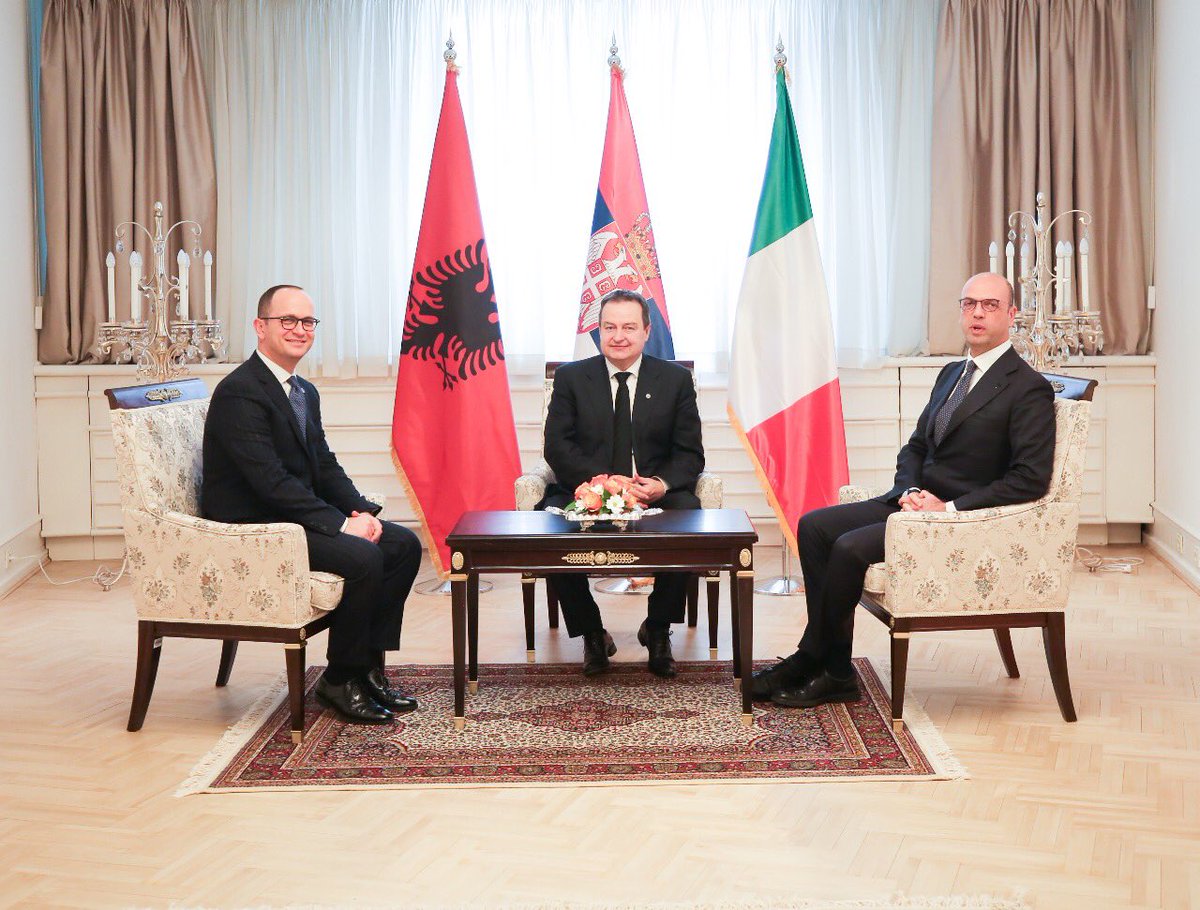 BELGRADE – The revival of the European Union’s enlargement policy towards the Western Balkans has brought together the foreign ministers of Albania, Italy and Serbia at a meeting in Serbia to discuss a common approach of the countries in the region.

The meeting focused on the common approach of the countries in the region, based on Italy’s advocacy for a revival of the EU’s enlargement policy in the Western Balkans and the recently published European Commission Strategy as a document that puts emphasis on fulfilment of the region’s accession aspirations.

“The trilateral agenda has contributed to the consolidation of political cooperation among our countries and has helped to build a new image that is based on regional cooperation and the implementation of EU policies and projects in the Balkans with Italy’s and EU’s direct support,” Bushati emphasized during the meeting.

Serbian FM Ivica Dačić announced Serbia, Italy and Albania would organise trilateral meetings of their chambers of commerce and NGOs in order to boost relations.

Speaking at a press conference after meeting with Italian and Albanian FMs Angelino Alfano and Bushati, Dačić said Serbia and Albania were grateful to Italy for its support for European integration and noted Rome was an advocate of EU enlargement.

“Our orientation is to improve our relations, continue to exchange top-level visits and seek common interests in many areas, such as strengthening of regional cooperation, infrastructure connectivity, European integration, as well as security,” Dačić said.

He said they had also discussed the upcoming Western Balkans Summit in London, a part of the Berlin Process.

The ministers stressed the added impetus for joint efforts to implement the Berlin Process commitments, particularly the roadmap that the Trieste Summit established for the creation of the Regional Economic Zone and the implementation of the connectivity agenda.

The meeting confirmed the commitment and determination to maintain peace and security in the region as a common objective of the Western Balkan countries, which should serve as the basis for further strengthening security cooperation, overcoming divisions and narrow national interests.

The three also agreed to extend Trilateral action even at sectoral level, through a periodic calendar of institutions and line agencies’ meetings.

Regarding the process of normalization of relations between Kosovo and Serbia, Minister Bushati stressed Albania’s determined support for the Dialogue with the EU mediation as the right instrument to reach common solutions to a number of important issues, in benefit to the citizens of both countries.

“This is the best investment that provides real opportunities for final reconciliation and the common European path,” said Bushati.

He further demanded from the Serbian side the will and a determined political commitment to issues that include restrictions and constraints on the energy market, inclusiveness and membership in regional and international organizations.

In the bilateral framework, Bushati highlighted the enrichment of new developments in Albanian-Serbian relations, to expand bilateral and regional cooperation through synergies, for further Europeanization of the region.