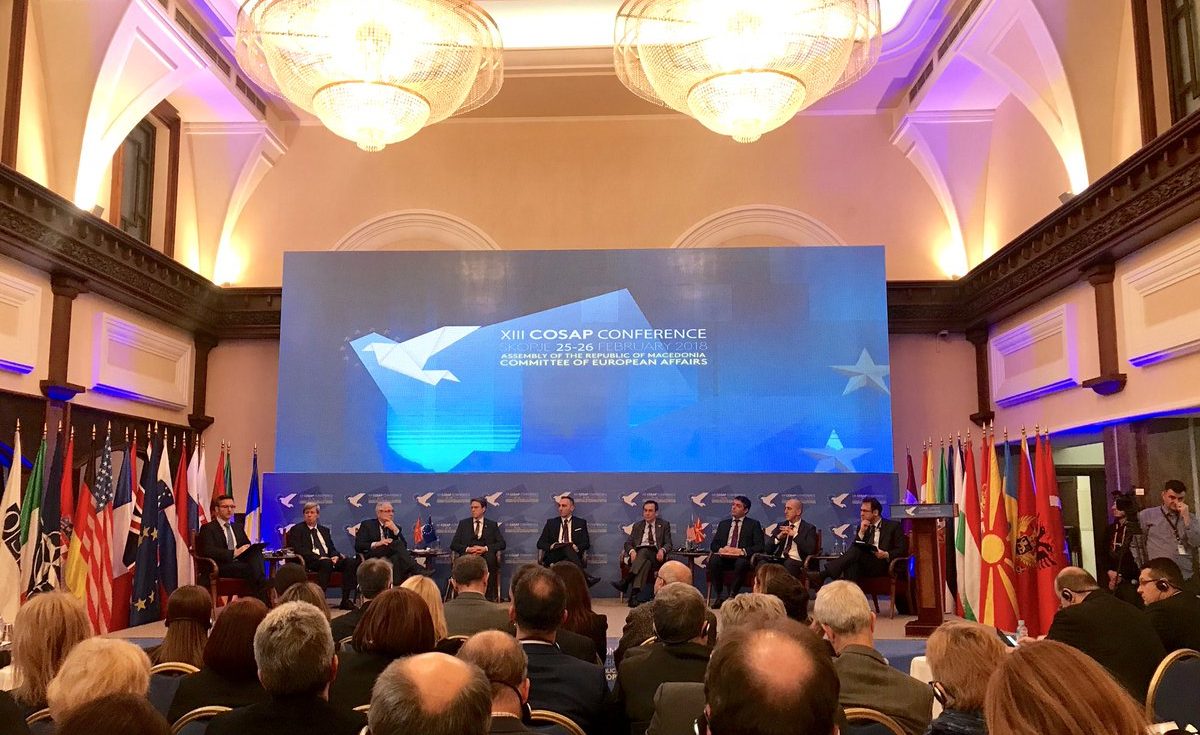 SKOPJE – The 13th Conference of Committees for European Affairs/Integration of countries within the Stabilisation and Association Process of South-East Europe was held on 25-26 February in Skopje and organised by the Assembly of the Republic of Macedonia.

The COSAP members addopted a Joint Statement, in which they have welcomed the priorities of the Bulgarian Presidency, as well as the Summit of Heads of State and Government dedicated to the Western Balkans, which will be held this Маy.

They have also emphasized their full agreement with the assessments contained in A credible enlargement perspective for and enhanced EU engagement with the Western Balkans and “supported the enlargement policy as a long-term and strategic concept in Europe and the region that will contribute to shared benefits in terms of peace, security and prosperity in Europe.”

Regarding the Strategy, the have positively assessed the increase in the financial support for the implementation of the Strategy, which in 2018 will amount to one billion euros in support of the transformation process of the societies of Western Balkan countries, as well as the Western Balkans Investment Framework where the Instrument for Pre-accession Assistance – IPA will gradually increase by 2020 and will play a central role in enticing foreign investments in the region.

“The COSAP members have welcomed the initiative of the European Commission to strengthen the rule of law by broadening the existing negotiation documents and the action plans for all Western Balkan countries.”

When it comes to the connectivitey, they have agreed with the initiative of the European Commission to increase transport and energy connectivity of the region with the EU, including new investment support with emphasis on strengthening all the dimensions of the EU’s Energy Union and expanding the Union to the Western Balkans.

They have also underlined the importance of the initiative of the European Commission for a Digital Agenda and agreed with the initiative of the European Commission to support reconciliation and good neighborly relations which includes supporting transitional justice, missing persons and increased cooperation in education, culture, youth and sport.

They have “expressed full support for the Berlin Process, initiated by German Chancellor Angela Merkel as well as the summits held in Berlin, Paris, Vienna, Trieste and the upcoming Summit in London, all aimed at revitalizing the enlargement policy and visibly strengthening the regional cooperation. They particularly welcomed the signing of the Declaration on Regional Cooperation by Western Balkans Foreign Ministers in Vienna aimed at resolving the bilateral issues and calling against blocking the EU accession process of neighboring countries.

They underlined the importance of the Transport Community Treaty signed in Trieste, the need for its implementation through specific development projects, such as Corridor 8 and Corridor 10, in order to improve the transport infrastructure and regional connectivity, to enhance the economies and citizens’ standard of living. They welcomed the establishment of the Regional Youth Cooperation Office (RYCO) in Tirana, as well as the possibility of restoring the confidence among the youth and advancing their mutual cooperation on the path to the EU.”

They agreed on the mportance of including civil society organizations and associations, as well as every citizens on a broader level, and proposed giving greater impetus to the regional cooperation between the parliamentary committees on European Integration/Affairs with the goal of promoting European values.

Regarding the date of a potential accession to the EU by 2025, the have voiced their expectation that the integration of Western Balkan countries will be completed by 2025.

POLITICO: Serbia is this week’s winner

Borissov: Juncker’s visit to the region shows importance of the Western Balkans