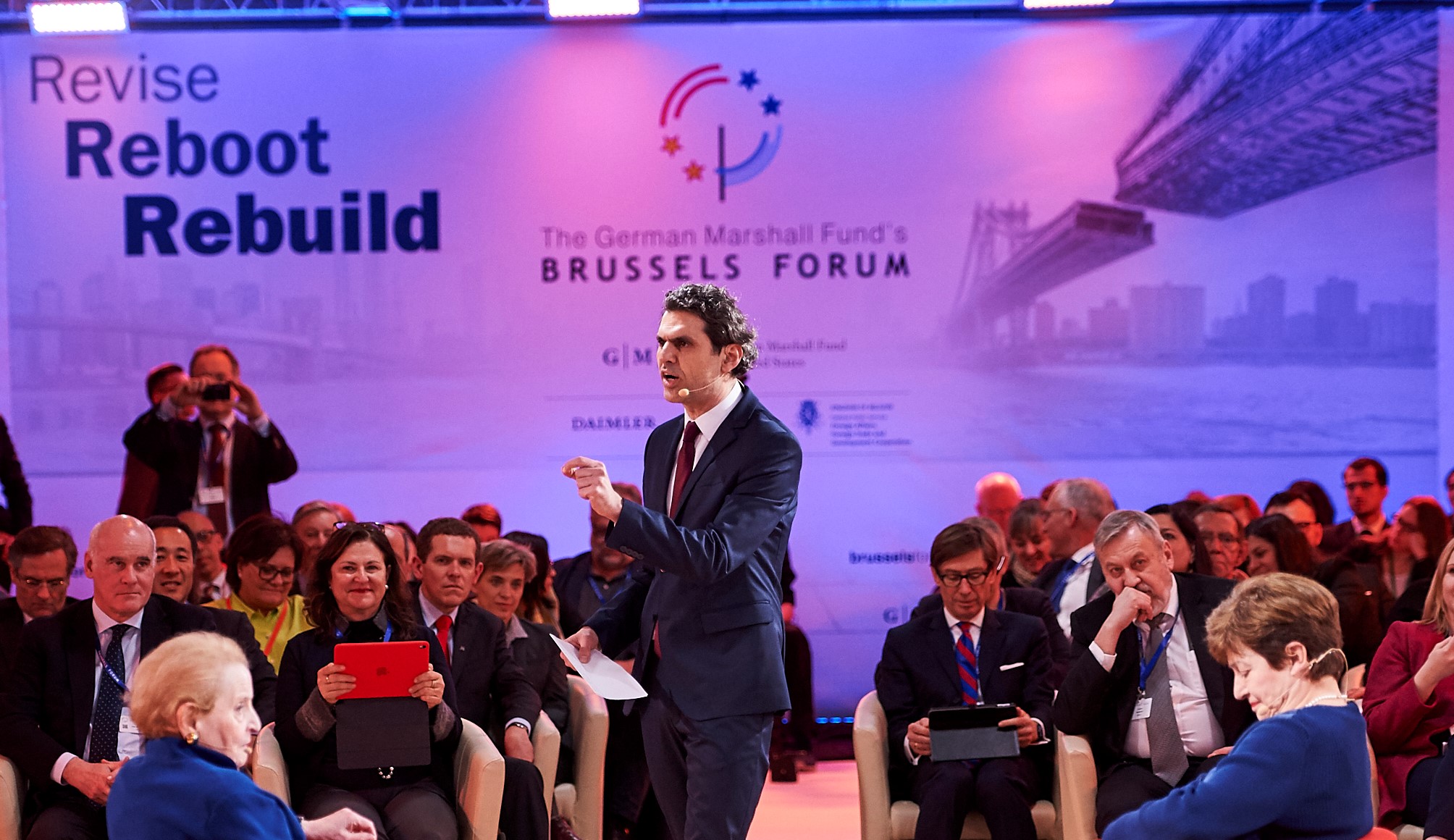 Interview with Ali Aslan, a famous German TV presenter and journalist, done this year’s German Marshall Fund’s Brussels Forum, where Aslan was one of the moderators. In the interview we have discussed topics such as the formation of the new German government and its expected policy on the EU and European enlargement.

European Western Balkans: The new German government is going to assume office soon. Do you expect any significant changes in the policy of the new government, having in mind that the same two parties will actually be running it?

Ali Aslan: You are right. It is the continuation of the same government, but if you look at the individuals, and the cabinets, you do see drastic changes. I think both political parties have taken the opportunity to renew their personnel.  They are sending the message to the voters  – we got your message, you want a fresh start, you want new faces and new ideas. While the constellation is the same, with SPD and CDU, aside from Chancellor Merkel the rest is really different, if you look carefully. I think both sides have realised that they cannot go on as they used to. In the line of all the challenges that lie ahead of Europe, Germany did not have the luxury anymore to wait any longer or head to the polls again for a new election. For better or worse, this is the government we have now for four years.

EWB: Speaking of the EU, do you expect of Germany to continue to play a key role in the EU? What do you expect from this Merkel – Macron axis?

AA: Most definitely, Germany is still the indispensable nation in Europe. We have not had the government in place for six months, but that does not change the fact that Germany is, economically speaking, the most powerful country in Europe or the most populous country in Europe with 80 million people. No doubt Chancellor Merkel might have been weakened, but Germany itself is going to take the lead once more. You are right, there is a new President in France now, and I think this is a great relief to Germany because it does not want to carry the heavy burden by itself. It needs a strong partner. And with Brexit, the only strong partner that is left is France. So, it is vital and good for Germany that there is a president Macron, who wants to play a leading role in Europe. You will see a renewal of the German-French axis.

EWB: Germany is seen as the key player when it comes to the enlargement in the Western Balkans. Do you expect the new government to continue with the same kind of approach to enlargement, maybe be more supportive towards it or perhaps a bit more reserved, having in mind the messages sent by the voters?

AA: Enlargement is not something that one country can drive – there are interests involved. This is not a question of Germany taking the lead, but whether Europe in its current shape or form is able to absorb more countries. At a time when perhaps even the future of Europe is at stake, and social cohesion as well – we are talking at the time when Great Britain is leaving, when issues with Russia are not being dealt with, when the Euro crisis is not gone away, it has just become quieter – I do not think that Germany or any other country is principally opposed to enlargement, but I think that right now that is not the priority on the plate. Right now, it is about keeping this Union of 27 nations together. That will be difficult enough, because, if you see what is happening in Poland, Hungary, Czech Republic and Slovakia, particularly this would be the refugee issue – there are fundamental differences that we are having right now. There are countries in the EU that do not share EU values. Right now, EU members are undermining the EU law, freedom of press and etc. That has to be dealt first before the EU can move on to take another country.

AA: I would love to sit here and tell you that European leaders learned their lesson from 2015. I am not sure that is the case, to be honest. They were not prepared back then, even though all signs were indicating that something was coming. Even in the year of 2018, we are still pretending or pretending again that we are immune to that. If you look at all the crises that are taking place at the same time – Syria, Libya, Yemen, the Sahel region – all of those are unresolved, and yet, we are thinking that 2015 was the pinnacle, that we have reached the limit of what it is coming. Is there a renewed appreciation for the Western Balkans – I am not sure, to be honest. I think Europe is still in denial when it comes to refugees. I think they would say that we have braced the worst and the worst is behind us. That is the attitude I am encountering. I am not sure that is the truth or reality.

EWB: Do you believe that the message sent by the German voters was a message against EU enlargement or not?