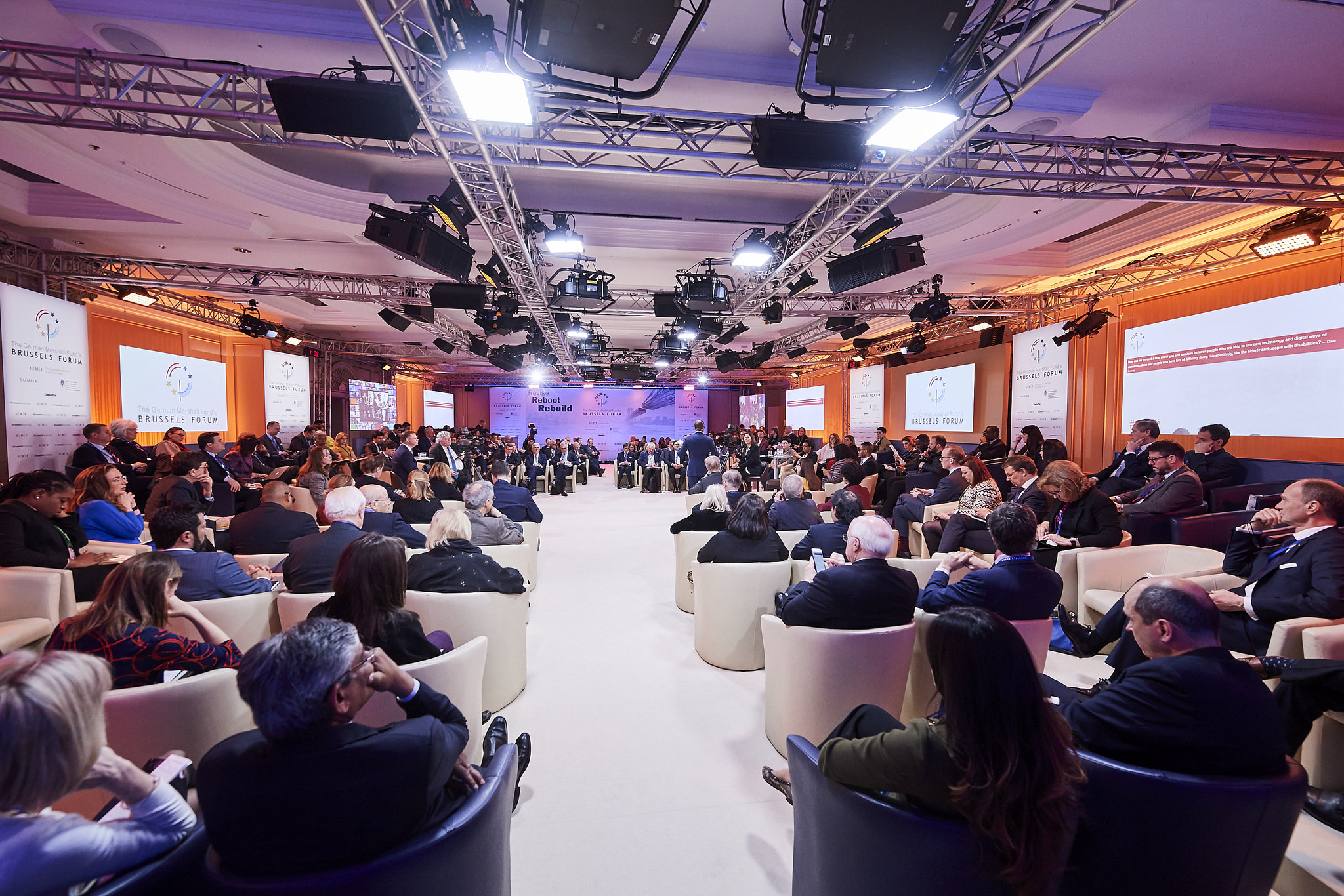 BRUSSELS – The 13th German Marshall Fund’s Brussels Forum took place on 8-10 March. As in the previous years, it gathered leaders from government, business, journalism, and academia for discussions of pressing global issues.

One of the key panels of the first day was with Polish Prime Minister Mateusz Morawiecki, who addressed policymakers from across Europe and the United States. Despite recent controversies between Brussels and the EU, the prime minister struck a conciliatory tone.

“We try to find a common language with our Western European partners, because I truly believe in Europe,” Prime Minister Morawiecki told the BBC’s Katya Adler in a conversation that addressed the controversies between Poland and Brussels.

The conversation came at a time when the trust in the transatlantic relationship has increasingly come into question, with the Trump administration’s recent announcement of tariffs on steel and aluminum calling trading relationships within the United States and Europe.

“We believe in trade with the United States. We believe in reciprocity and this is why I say, in case needed, we will protect our interests, but this is not our attitude. Our attitude is to invest in free and fair trade and we see this as beneficial for the European economy and for the US economy,” said Federica Mogherini, High Representative of the European Union for Foreign and Security Policy and Vice President of the European Commission.

“GMF has always been committed to issues of diversity and gender balance,” said Karen Donfried, GMF President. “Women have been making big impact on policy for a long time. If you look at just our agenda today, we have Federica Mogherini, Rose Gottemoeller, Manisha Singh, Ana Gomes, Susan Ness, Michèle Flournoy, just to name some of those headliners. Women are leading today. I don’t know if she’s in the room now, but a trailblazer has been Madeleine Albright, and she will be with us over these next couple of days.”

The Deputy Secretary General stressed the importance of the transatlantic bond, noting that troops from North America and Europe currently serve together in NATO’s four battlegroups in the eastern part of the Alliance, helping to deter aggression. “In the field, on the ground, we see the essence of transatlantic trust,” she said.

She underscored that NATO is focused on transatlantic burden-sharing, and many European Allies have stopped cutting their defence spending, and are stepping up their contributions to Alliance security. On European defence, she stressed the need for complementarity between NATO and EU efforts.

Conversations throughout the day emphasized that despite tensions, there is a need to build trust.

Trade was at the top of the agenda on the second day of GMF’s Brussels Forum. Against the backdrop of a rapidly developing story of potential U.S. tariffs on steel and aluminum, the day’s first conversation featured Cecilia Malmström, European Commissioner for Trade, and Robert Zoellick, chairman of West Alliance and former World Bank president.

Despite concerns that potential tariffs on steel and aluminum could drive a wedge between Europe and the United States, Malmström highlighted common ground on the issue of overproduction in the steel sector. Tying trade to the conference theme of trust, Malmström said:

“We want to increase the possibilities for us to trade, for our people to meet to harness and shape globalization. To make sure that we get proper jobs, that we get fair trade, sustainable trade, and also because of the title of this meeting is today, how can we regain trust?”

Former Secretary of State Madeleine Albright also spoke on an entirely different force shaping the world: the refugee crisis. Secretary Albright pointed out the connections between the refugee crisis and other global challenges, saying “Most people don’t want to leave the home where they were born, where they speak the language and have their family. The people who are leaving Africa are being pushed out because of desertification,” said Albright. “We need to recognize the earth is not flat and there is a scientific basis to climate change. I think we need to have short-, medium-, and long-term action plans, because this is the new normal.”

The day’s most spirited conversation came in the form of an Oxford Style debate on the motion “Humanitarian Intervention Does More Harm than Good.”

Arguing for the motion were Frank Ledwidge, senior fellow at the Royal Air Force College and Dr. Rajan Menon, senior research scholar at Columbia University. Arguing against the motion were Dr. Kori Schake, deputy director general of the International Institute for Strategic Studies and Bernard Kouchner, co-founder of Doctors Without Borders and former French foreign minister. The debate, hosted in partnership with Intelligence Squared U.S., explored many facets of humanitarian and military intervention. While both sides won audience members to their position, as recorded through the conference voting app BFconnect, the team arguing against the motion won a greater proportion of the audience to their side and prevailed.

Other notable speakers on Friday included members of the U.S. Congress and the European Parliament, CEO of The World Bank Kristalina Georgieva, and U.S.  Ambassador to NATO Kay Bailey Hutchison. Laura Rosenberger and Jamie Fly, of GMF’s Alliance for Securing Democracy (ASD), presented Hamilton 68’s methodology, the dashboard that tracks Russian disinformation. The conference will conclude Saturday with sessions featuring Georgian President Giorgi Margvelashvili, a discussion on resolving the North Korean threat, and a conversation with U.S. Senator Chris Murphy.

Senator Chris Murphy and Norbert Röttgen, head of the German Bundestag’s Foreign Affairs Committee, kicked off the final day of GMF’s Brussels Forum. In a conversation that touched on hot button issues from gun control in the United States to the threat posed by North Korea to rapid social change on both sides of the Atlantic, both Murphy and Röttgen expressed commitment to partnership between the United States and Europe. “We have to broaden the conversation. We have to build a kind of political approach among parliamentarians and businesspeople for this rational, liberal approach to foreign policy,” said Röttgen.

Murphy expressed a hope that that collaboration between Europe and the United States will continue, even on difficult issues such as trade and climate change.

“I think we can do some work, behind the scenes, in an inter-parliamentary manner,” said Murphy. “There are solutions that can still be there.”

EC expect language law to be forwarded to Venice Commission