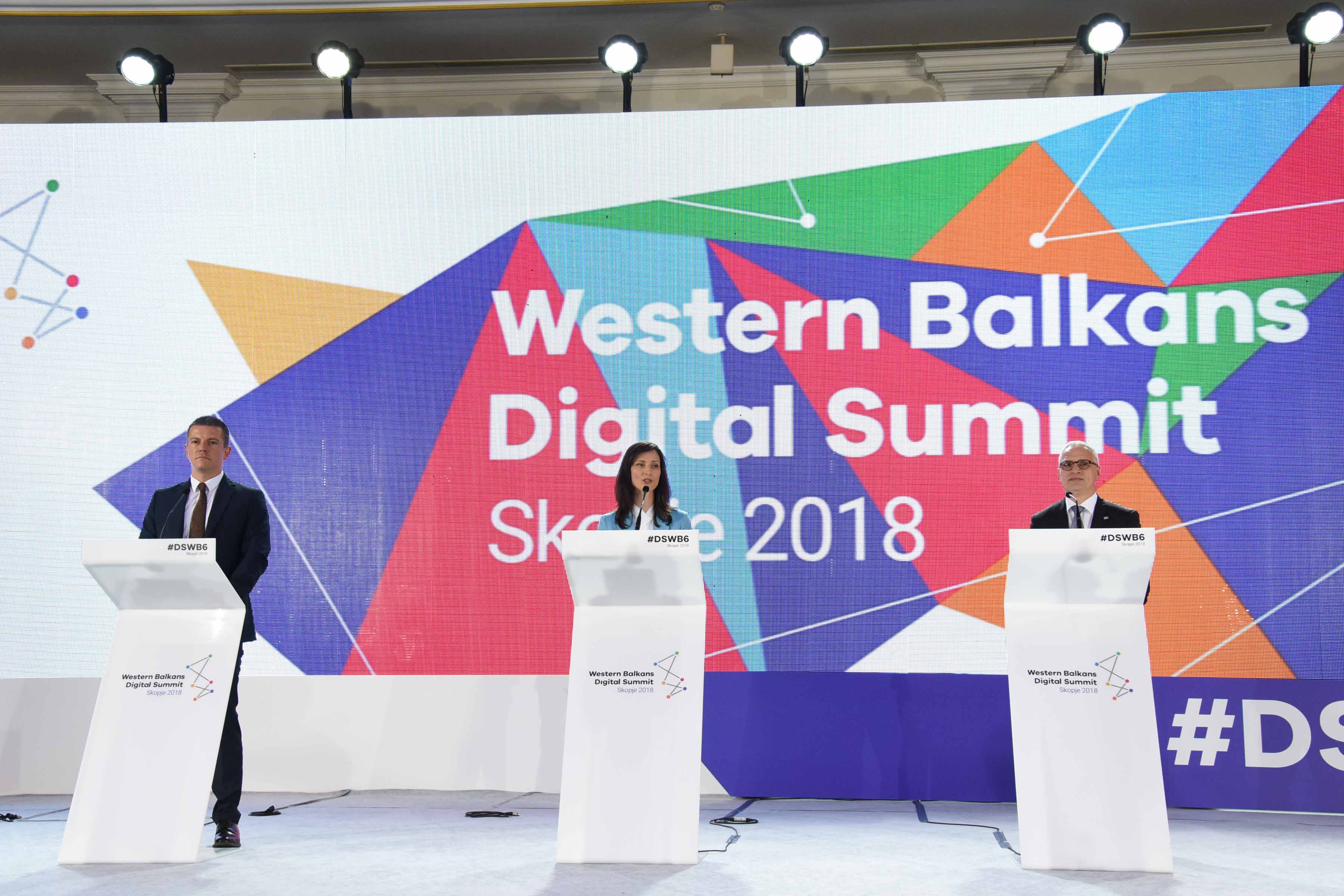 SKOPJE – At a joint press conference, Minister of Information Society and Administration of Macedonia, Damjan Manchevski, Commissioner for Digital Economy and Society, Mariya Gabriel, and Secretary General of the Regional Cooperation Council, Goran Svilanović, pointed out the significance of the first Digital Summit held in Skopje.

“Western Balkans Digital Summit 6” is a confirmation that we all work to achieving a single goal. For us, the Western Balkans is part of the European Union, while the digital transformation will help us succeed in intensifying the cooperation. Digital transformation changes our lives, something that has been recognized by the politicians as well. Under the recent Enlargement Strategy for the Western Balkan Countries, digitalization is placed high on the political agenda. We have important projects before us, such as reduction of roaming prices and cyber security”, Commissioner Gabriel pointed out.

“Digital transformation is indispensable so as to improve the quality of life of the citizens”, RCC Secretary General Svilanović said. He underlined that benefits from digitalization are felt in all aspect of life, including corruption reduction.

“This is a chance for the Western Balkans to be part of the EU, regardless of the political agenda. This event is a rare opportunity to define the common goals”, Svilanović said.

Minister Manchevski, as host of the Digital Summit, talked about the message sent by organizing this event.

“We, all Balkan countries, are finally together, putting joint efforts to make more for our citizens. Despite all political issues, despite all historical challenges, we are all together today, as we will get together again in a month time in Sofia, then in London, to affirm that the Wester Balkan countries are united in the digital transformation, as well as that we have the will, the dedication and the cooperation to jointly accept the change. This is a historical opportunity for the Western Balkans to be an example. A good example. Not as for the way we were recognized in the past. We are already working together”, Minister Manchevski pointed out.

“My expectations of this Summit are big. I expect many good news for our citizens. I expect for the roaming prices in the region and with the EU to be drastically reduced. I expect to agree on a joint approach in improving the access to broadband Internet. I expect for the Western Balkans to be the next ICT world destination. I expect for our young people to be leaders in advancing the digital skills and to stay in their native countries. I expect to mutually recognize the digital certificates. I expect for the Balkan to be digitally integrated in the EU, much faster than politically. But, not only I expect, but also sincerely believe that this will be attained”, Minister Manchevski said, wishing the participants a productive Digital Summit.

“Western Balkans Digital Summit 6” is part of the Berlin Process and it is aimed at regional coordination for EU accession of the region. Digital integration component envisages that the “Western Balkans Digital Summit 6” should be organized once a year, whereby it is of great significance for Macedonia as the country to be the first host of the Summit.

Later on, the working lunch was organized within the agenda of the first day of the ”Western Balkan Digital Summit”, attended by the President of the Government of the Republic of Macedonia, Zoran Zaev, the Chairman of the Council of Ministers of Bosnia and Herzegovina, Denis Zveidić, Prime Minister of Kosovo, Ramush Haradinaj, Vice Prime Minister of the Government of the Republic of Albania, Senida Mesi, Ministers of the Governments of the Western Balkan countries, Commissioners for European Neighborhood Policy and Enlargement Negotiations and for Digital Economy and Society, Johannes Hahn and Mariya Gabriel, Parliamentary State Secretary, Federal Ministry for Economic Affairs and Energy of the Federal republic of Germany, Thomas Bareiß, representatives from the European Investment Bank and representatives from the Regional Cooperation Council.

The focal topic discussed at the working lunch was the importance of integration of the Western Balkan countries in the EU digital single market.

During the discussions, Prime Minister Zaev pointed out the important role of the ”Western Balkan Digital Summit” and the presentation of the “Impact of Digitalization on Prosperity of the Western Balkans” study, as significant stimulus for the countries in the regions to deepen the cooperation and to work more intensively on digital transformation, which is to contribute to GDP growth, increased investments in the regions, start-up development and job creation.

Initiative for institutionalization of the Business Friendly Environment – BFE, as multilateral organization, to be underpinned by the governments in the region, was also discussed at the working lunch.