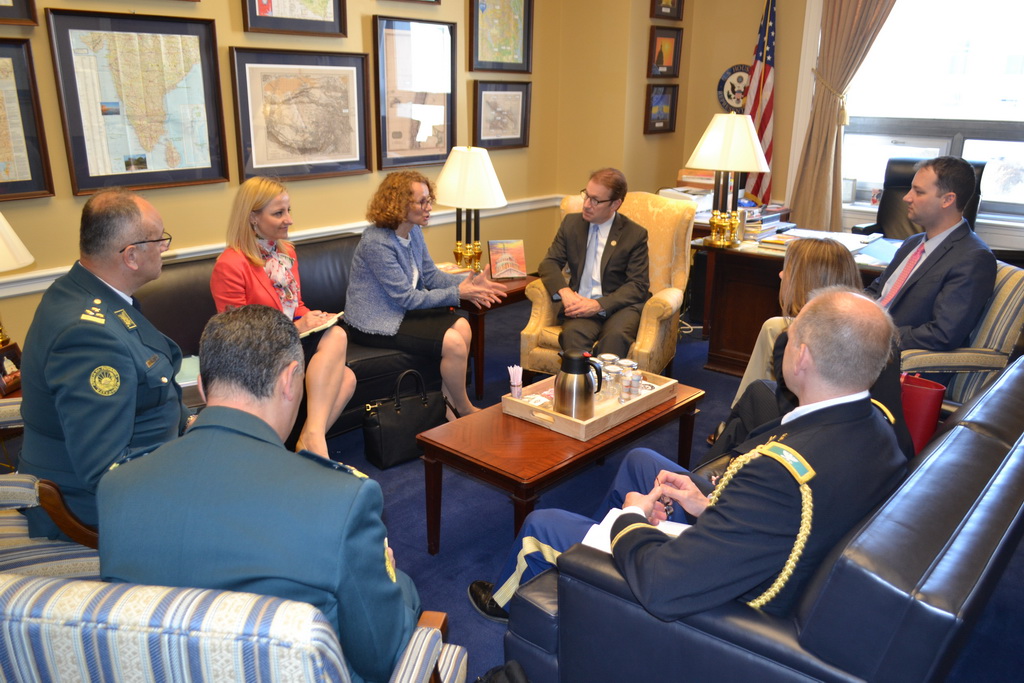 WASHINGTON – Deputy Prime Minister and Minister of Defence of the Republic of Macedonia, Radmila Šekerinska, started the official visit to the United States by taking part in the roundtable organized by the American Atlantic Council on the topic “The Balkans and the NATO membership through the prism of Macedonia: high global security stakes and the fate of democracy in a small country”.

At the round table, Minister Šekerinska spoke about the Balkans and the challenges it has faced in the past, the political crisis in Macedonia and the new reform processes, as well as the return of the country on the road to Euro-Atlantic integration.

“These past 10 months, we have seriously focused on domestic reforms and on improving good neighborly relations. We focused on issues that were at the heart of Euro-Atlantic integration – free media, rule of law, inter-ethnic relations, resilience of institutions”, said the Minister.

Reflecting on the events in the Assembly that took place on the present day, last year, Šekerinska said that last year, on 27 April, Macedonia hit the bottom. “The situation could have easily gotten out of control and bring the country on the verge of civil war. We had the majority in parliament and everyone was expecting a new, reform-oriented government to be elected, when the people who wanted to keep the old ways realized that violence was the only way they had left. Fortunately their attempts were unsuccessful”, said Šekerinska.

As an example of the new reality and democratic changes, Minister Šekerinska mentioned the media landscape and the visible improvements in this area. “We are the new star of Freedom House’s latest report, which says, “Macedonia has the biggest opportunity for a democratic breakthrough”. For the first time since 2010, we see improvements in each of the criteria. The media are free to choose who they wish to criticize, including the government, but this is how democracy should look like”, said the Minister.

Šekerinska pointed out that the government is investing a great deal in its relations with neighbors, mentioning the agreement on good neighborly relations with Bulgaria, which was signed in less than two months after the government’s election. “This deal has opened up enormous opportunities for both sides. Both Macedonia and Bulgaria presented themselves as countries that are mature and interested in the future behaving as European countries”, said the Minister. She added that this resulted in confidence for the government to engage in solving the key issue in its relations with Greece – the name, with a clear determination to try and find a solution to this long-standing issue.

The Minister also referred to the reform processes in the defence and the Army. “This government has shown that it is determined to change the tendencies – this year we increased our defence budget by 15 percent, we increased the salaries for all military personnel by 10 percent, we decided to increase the budget annually by 0.2 percentage points and we increased our participation in Afghanistan by 20 percent”, said the Minister.

“We ask you to support Macedonia in receiving the invitation to join NATO this year, because such a breakthrough can have a positive impact, which will create a new hope in the Balkans,” Šekerinska concluded.

The Atlantic Council is one of the most influential think tank organizations in the United States and an important forum for discussions related to economic and political changes that define the 21st century, which has an impact on policy makers and decision makers in the United States. The round table was organized by the Transatlantic Security Initiative as part of the Atlantic Council, and it was moderated by its President, Magnus Nordenman.

Šekerinska also had meetings with Congressmen David Price, North Carolina Democrat and Peter Roscamp, a Republican from the State of Illinois, as well as with Elizabeth Obegi, Foreign Policy Adviser to the Senate of the State of Arizona, John McCain. Minister Šekerinska explained the government reforms including the progress in the defence reforms, the recommendation to open negotiations with the EU and the democratic processes in Macedonia, as well as the progress in the interethnic relations in the country. Representatives from the US Congress reaffirmed support for Macedonia’s membership in NATO and the EU and stressed the stability, security and development of democracy in Macedonia as important for the region.

Today, Minister Šekerinska will have separate meetings with the Deputy Assistant Secretary of Defence of the United States, Laura Cooper, as well as with senior State Department officials.

Kocijančič: Dismissal of Mićunović against freedom of expression and media