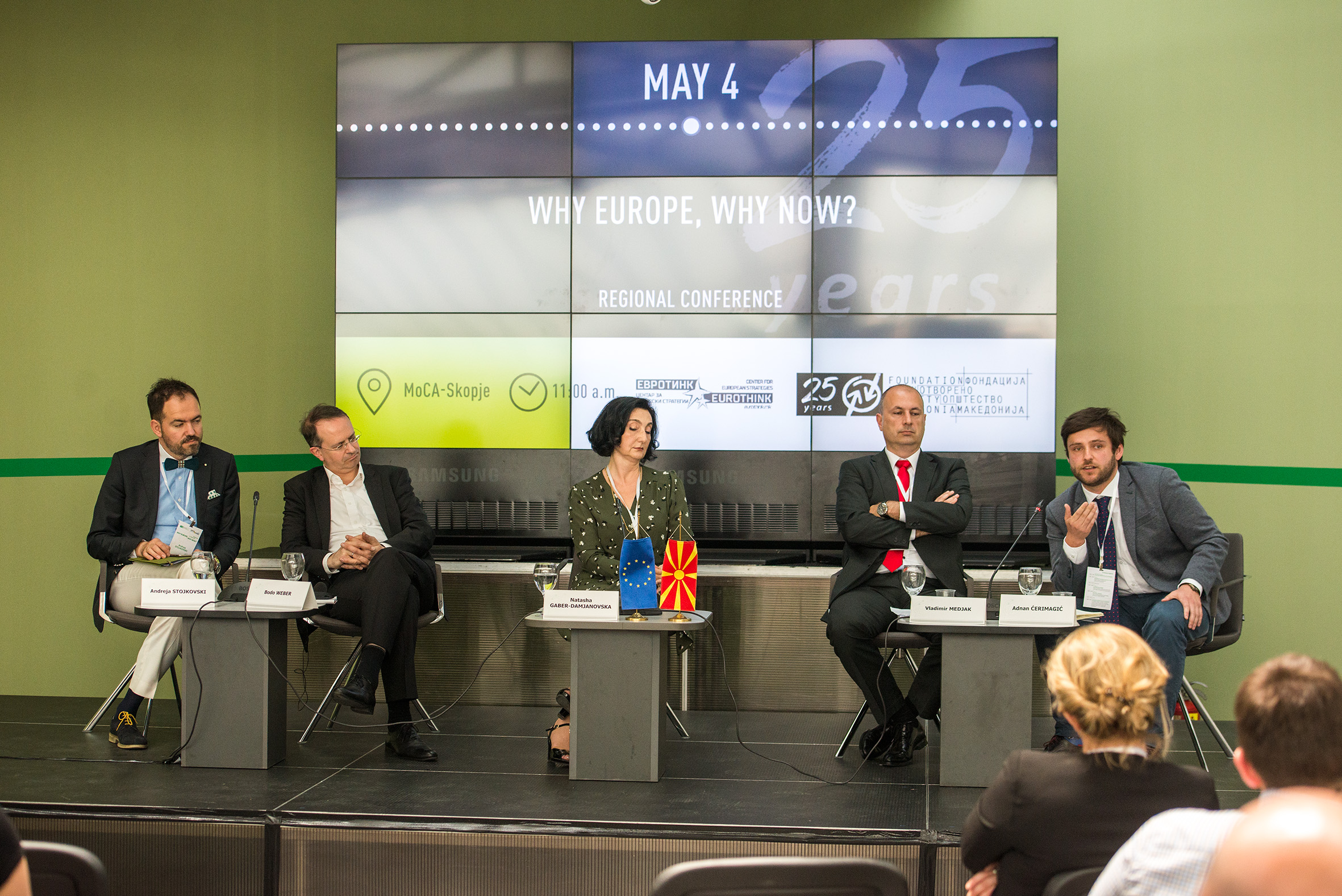 SKOPJE – Regional conference “Why Europe, why now?”, organized by the Center for European Strategies Eurothink and Open Society Foundation Macedonia was held on Friday 4 May in Skopje.

The conference brought together civil society representatives, experts and EU officials to discuss several important topics ahead of the EU – Western Balkans Summit in Sofia, which will be held on the 17 May. Panels dedicated to EU accession, alternative powers, bilateral disputes and European perspective of the region.

Among the speakers were Jordi Vaquer, Regional Director for Europe of the Open Society Initiative, Bodo Weber, Senior Associate at the Democratization Policy Council, Daniel Stefanov from the European Council on Foreign Relations (ECFR), Ilinka Mitreva, the former Minister of Foreign Affairs of Macedonia and Vladimir Međak, the Vice President of the European Movement in Serbia.

“Enlargement and preparations before enlargement are taken for granted. “Why now” – is a very important addition to the question we asked at this event. If you know the effects of what it means to be a part of the EU, it is really legitimate to raise this issue. Was accession to the EU a solution to the problems in Bulgaria? I sometimes ask questions about the EU, but those who oppose it are not people who think like me. People who do not want to have oversight of the country’s management, they are busy with stories of nationalism”, said Jordi Vaquer, Regional Director for Europe at OSI.

“European integration is a priority for Macedonia, and this is part of our mission. We believe that Macedonia needs European integration. I think that these EU efforts that were made after February with the new strategy for enlargement and the latest EC report 2018 could be a chance not only for Macedonia, but for the region as well. All views are addressed in terms of resolving the name issue and I believe that the outcome of this plan will depend on getting a date for the start of negotiations “, said Fani Karanfilova-Panovska, Executive Director of the OSF Macedonia.

Even though the Ministers of Foreign Affairs of Macedonia and Bulgaria, Nikola Dimitrov and Ekaterina Zaharova were expected to participate in the event, they were delayed by the ministerial meeting in Thessaloniki on the same day, where they met their Greek and Albanian counterparts.

The most massive anti-government protest took place in Podgorica