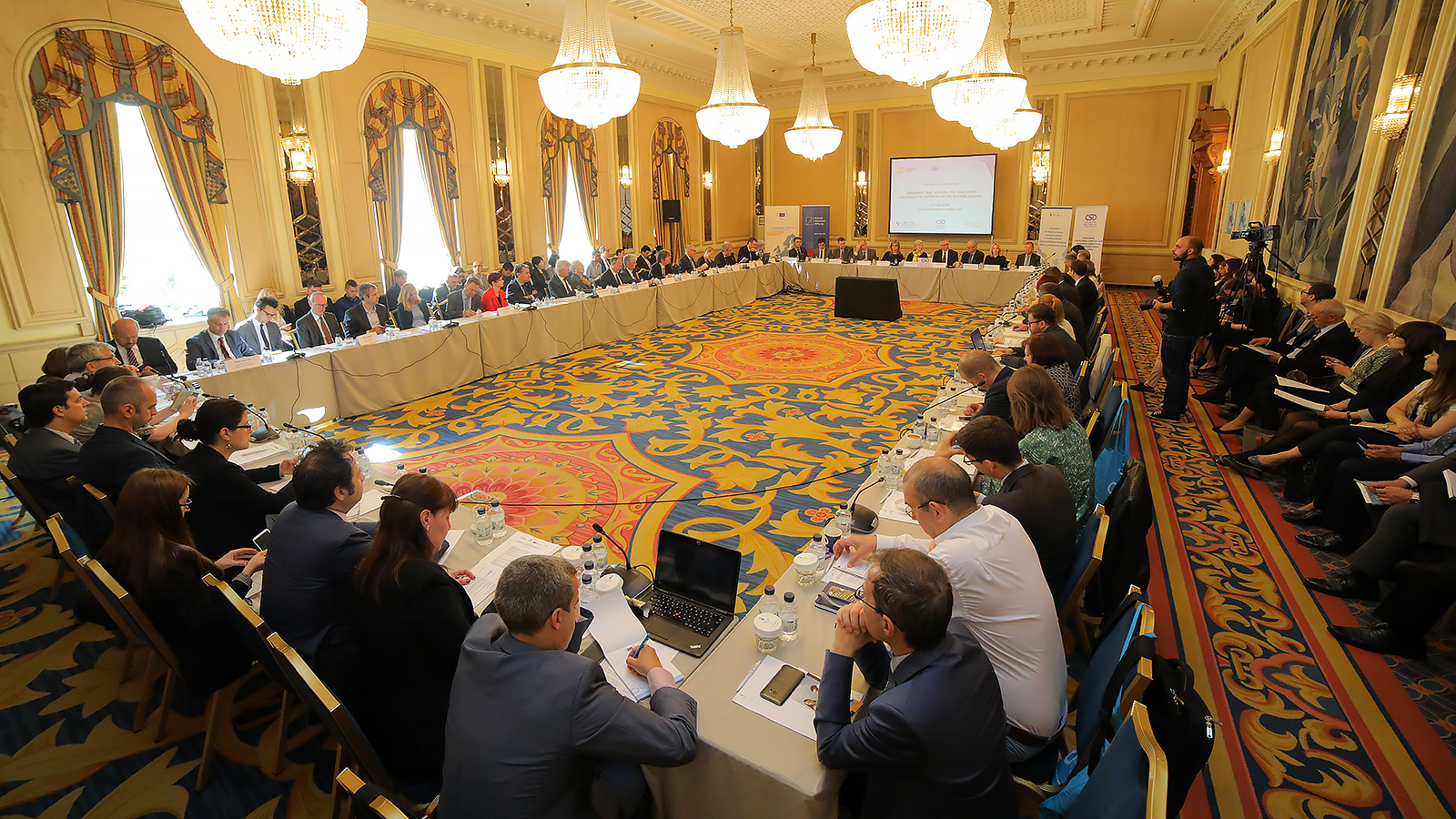 SOFIA – More accountable governments and more active citizens, as well as transparent municipalities should be the EU’s goals for the Western Balkans, it was stated at today’s international conference Democracy that Delivers: Ten Years Later – Unlocking the Potential of the Western Balkans, organized by the European Fund for the Balkans and the Centre for Study of Democracy, with the support of the Konrad Adenauer Foundation and the European Commission.

The event was opened by Ekaterina Zaharieva, Deputy Prime Minister and Minister of Foreign Affairs of the Republic of Bulgaria, who stated that “the biggest added value to the Sofia Summit is the number of side events”.

“All 28 EU’s member states leaders support the Sofia Summit declaration, which is why this event is even more important”, she said, adding that the next follow up summit will not be in 15 years, like the previous Thessaloniki Summit and that these events will become much more frequent.

“It is critical for Bulgaria and United States to send a clear message to the Balkans that they have the Euro-Atlantic future”, stated Ambassador Elisabeth Millard, Principal Deputy Assistant Secretary of the Bureau of European and Eurasian Affairs, U.S. Department of State.

“Negotiations on Macedonia’s official name are moving forward faster than ever, and we call both sides in these negotiations to practice patience and restraint. Other processes are also ongoing and Belgrade-Pristina negotiations show that dialogue is indispensable,” Millard said.

Professor Florian Bieber from University of Graz and the coordinator of the Balkans in Europe Policy Advisory Group (BiEPAG) stated that “opportunity, urgency and analysis” are the three most important words on this conference. However, he is not content with current attitude of the EU towards the region.

“Stagnation and democratic backsliding, reduction in quality of democracy, in the Western Balkans have to be acknowledged. Also, most of the local economies remain unprepared for the common European market”, he said.

In his opinion, Western Balkans should ask itself why it wants to be a part of EU, and the Union should start to perceive the region not in terms of geostrategic enlargement, but as an integral part of the continent. 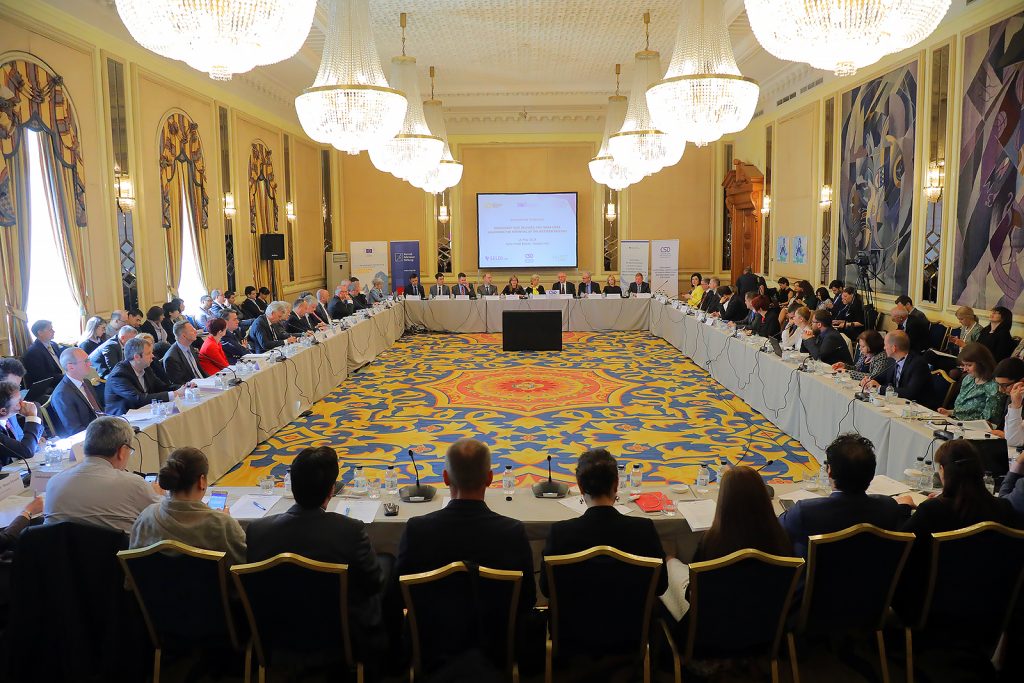 “That is why democracy should never be traded for security, and Western Balkans will be safer and more stable as more democratic neighbourhood of the EU. Better highways will not address the challenges faced by the Western Balkans”, Bieber underlined.

He has also warned that bilateral issues were used “strategically” by nationalistic political leaders.

“We are deepening our communication efforts in the region and we have started to talk about benefits of democratic and security reforms, much needed by its communities”, stated James Mackey, Head of the Euro-Atlantic and Global Partnership Section, Political Affairs and Security Policy Division of NATO Headquarters.

He has also said that the first joint NATO exercise hosted by Serbia, aimed at preparedness for disaster relief “are a big milestone for our (NATO-Serbia) relations”, and that “they will show the benefits of regional approach – working across the borders”.

For Ana Marjanović Rudan, Program Advisor in European Fund for the Balkans, most important side effect of Berlin Process is a more comprehensive involvement of the civil society in regional initiatives.

“Over 250 think-tanks and advocacy groups have come together in the Berlin Process and we continue to make the civil society participation in the regional initiatives a new normal”, she said.

Twin challenges in the Western Balkans remain state capture and “Russia plus” (other global actors involved in the region), Ruslan Stefanov, Coordinator in the Southeast European Leadership for Development and Integrity (SELDI) and the Director of Economic Program, Centre for the Study of Democracy during the second panel named “Policy Response and International Assistance”.

“Lack of good governance and economic perspective has led to high youth unemployment in the Western Balkans”, Stefanov said.

This is not the only issue, as China and Russia are also bringing their integrated efforts to the region, he said.

“We want to work with young people and young people should connect across the Western Balkans”, answer Colin Wolfe, Head of Regional Cooperation and Programmes at DG NEAR and European Commission. 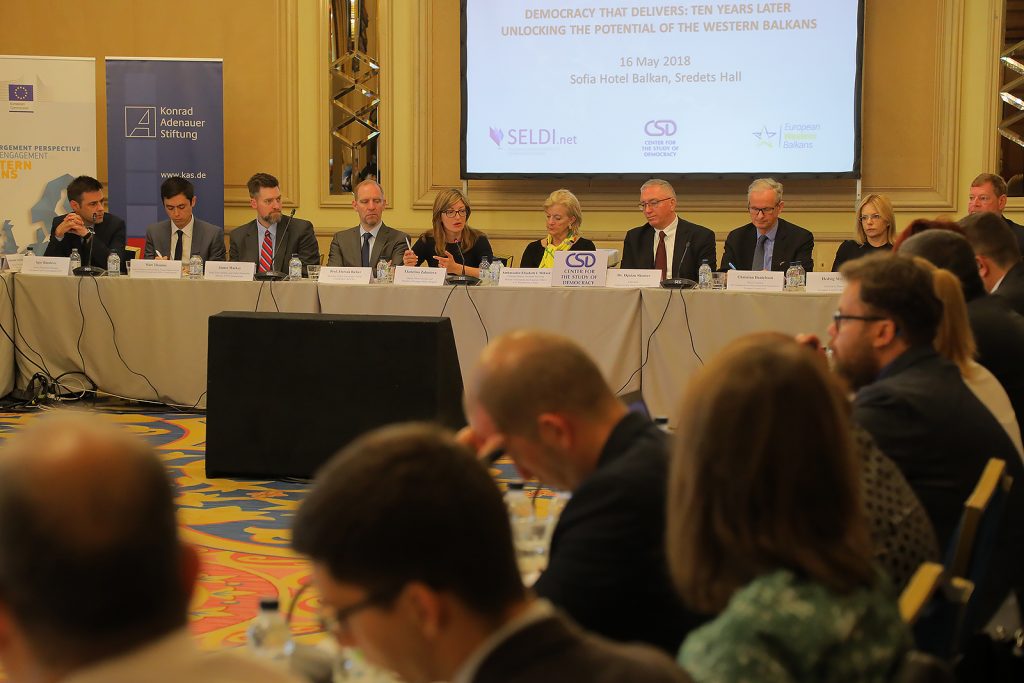 His answer to the existing problems lies in strengthening of the rule of law, engagement in security, connectivity and reconciliation efforts.

“We do not want to push difficult questions under the carpet” Wolfe said.

Ambassador Haakon Blankenborg, Director of Section for Southeast Europe in the Norwegian Ministry of Foreign Affairs added that the has Norway wanted to decrease its budget for the SE Europe and the Balkans, but that they ended up increasing it, mainly due to the planned efforts of other European partners.

“We recognize freedom of media, strong civil society and increased connectivity as important, so they remain on Norwegian agenda”, Blankenborg stated.

She added that “women and youth are often marginalized in the Western Balkans” and that SIDA’s efforts remain aimed at addressing this issue, as well as ecological issues.

“We need to make sure that the EU integration is as inclusive as possible, otherwise we risk the legitimacy of the whole accession process” Mossberg stressed, and added that this organization remains selective of partners implementing their programmes, and that they support mainly local civil societies and media.

Roland Python from the Swiss Contribution Office in Bulgaria said that this organization has allocated 10 million Euros for addressing the regional issues and strengthening of local governments.

“More accountable governments and more active citizens, as well as transparent municipalities are our goals for SE Europe in the forthcoming period”, Python said.

Without EU democratic standards, the future of the region looks bleak, according to Srdjan Cvijic, Senior Policy Analyst in the Open Society European Policy Institute and BiEPAG member.

“EU needs to be tougher towards the Western Balkans. European Commission needs to address the democratic backsliding in some countries”, he emphasized. 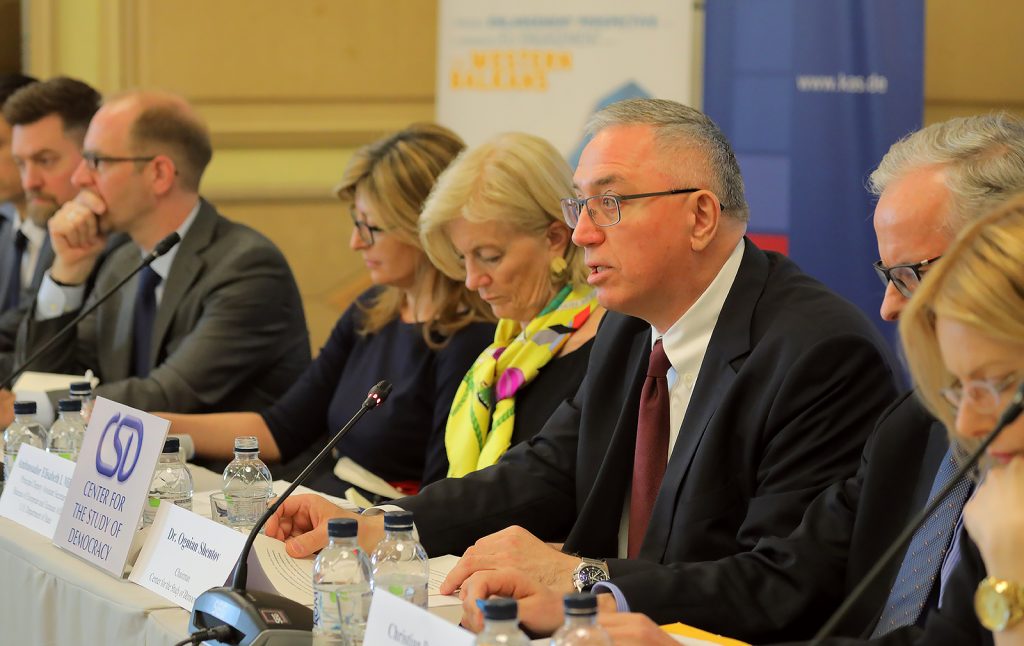 “People in the Balkans need to put down the latent questions of identities, which are readily exploited during the election cycles”, said Ambassador Dr. Klaus Wölfer, Head of the Department for Southeast Europe and EU Enlargement from the Austrian Ministry of Integration and Foreign Affairs.

“We think of the Western Balkans as Southeast Europe and consider our self as its first neighbour. This is why we are at the forefront when discussing their difficult issues, such as depopulation of the SE Europe, which needs to be addressed and studied in the earnest”, he said.

He has also addressed the upcoming Austrian presidency over EU, and said that “rough winds across the world speak in favour of more bold moves” through accelerated process of integration of Western Balkans.

“Bold moves such as admission of Greece and Spain, as well as the accession of 2006. were such visionary moves, which were shown to be correct. I think that similar should be done for the Western Balkans”, he concluded.

The third panel titled Civil Society that Delivers was opened by Alexander Gerganov, Senior Analyst from Centre for the Study of Democracy, who presented their research on corruption pressures in Bulgaria.

“State capture affects the country as a whole. We have asked the citizens if the corruption can be reduced and more than half of them think that it is impossible. However, we have mapped the situation in Bulgarian border police and other vulnerable institutions, and the corruption pressure is reducing due anticorruption measures” he said, and warned that the only result of high-level corruption is failed democracy.

Jovana Marović, Executive Director of Politikon Network from Montenegro said that all of the countries in the region are making progress in combating corruption and that civil society sector is getting more involved in the EU integration process.

“Despite this, civil society inputs in the Balkans regularly go unnoticed by the state actors. Cross-border cooperation of CSOs is often self-initiated”, she said pointing out that the “new, credible approach of the EU towards Western Balkans shows that the Union is aware that their previous approach was ineffective.”

Her answer to the nominal progress of the reforms, and often evident backsliding is the engagement of European Commission.

“If Europe is concerned about media freedoms, rule of law or human rights, they should clearly make them a prerequisite for the furthering of the negotiation process”, Marović said.

Zef Preci, Director of Albanian Centre for Economic Research, said that politicization of economic sphere is still high and that two out of five businesses in Albania recognize political connections as necessary for economic success.

He has also praised civil society, which is engaged in promoting judicial reform and which “gives voice to the citizens and keeping the government accountable”.

Ana Marjanović Rudan said that the main entry point for civil society in the decision-making process should be through regional cooperation, where CSO’s input is indispensable.

“Civil society policy briefs have managed to contribute to documentation that will be distributed during upcoming London Summit dedicated to the Berlin Process. We have recognized four key issues for the continuation of this process this July in London: economy, security, lack post-conflict reconciliation and gender inequality”, she stated.

“We have compared Country reports with the available statistics and the civil society sources, because of the democratic backsliding sometimes invisible in the official documents. Flawed elections systems, violence against journalists and diminishing freedom of expression is plaguing Western Balkans and must be addressed, Burazer said.

He concluded that the goal of the “Shadow Report ” was to put frequently overlooked question of democracy back on the agenda.

“Berlin Process started as an idea aimed at the region and is necessary, but it takes place once a year, without adequate follow-up” underlined Zoran Nechev, Director of the Centre for EU Integration in the Institute for Democracy Societas Civilis, Macedonia.

“We want for Berlin Process to produce results, and a little redisign to it is necessary. We should focus more on the political and bilateral issues,” said Nechev.

He has also praised the fact that after four years civil society managed to integrate itself into decision-making of the Process.