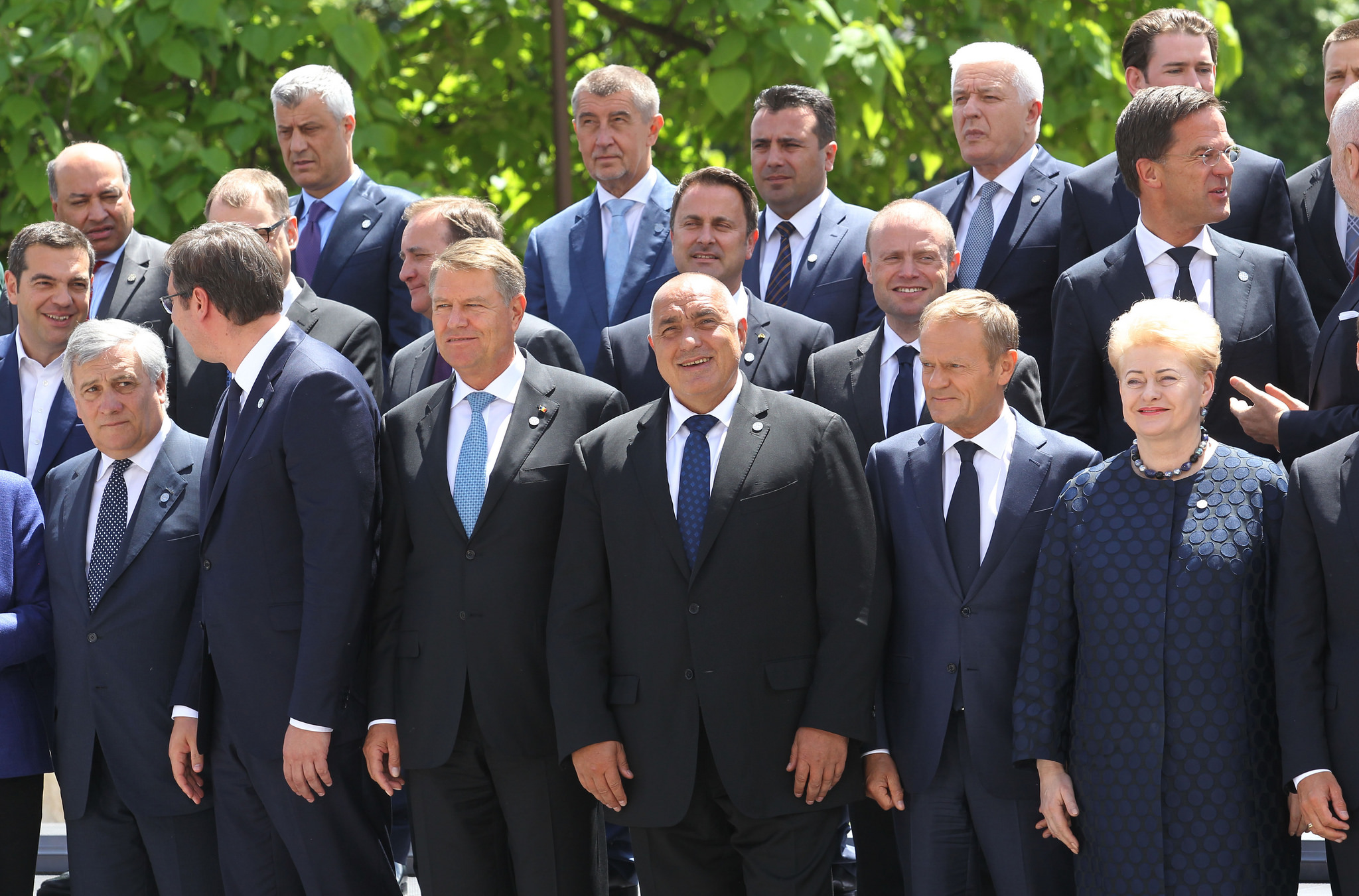 We, the leaders of the European Union (EU) and of its Member States, in consultation with our Western Balkans partners, and in the presence of relevant regional stakeholders, today concluded the following:

1. The EU welcomes the shared commitment of the Western Balkans partners to European values and principles, and to the vision of a strong, stable and united Europe, underpinned by our historic, cultural and geographic ties and by our mutual political, security and economic interests.

2. Recalling the Thessaloniki Summit of 2003, the EU reaffirms its unequivocal support for the European perspective of the Western Balkans. Building on the progress achieved so far, the Western Balkans partners have recommitted to the European perspective as their firm strategic choice, to reinforcing their efforts and mutual support. The credibility of these efforts depends on clear public communication.

3. The EU is determined to strengthen and intensify its engagement at all levels to support the region’s political, economic and social transformation, including through increased assistance based on tangible progress in the rule of law, as well as in socio-economic reforms, by the Western Balkans partners.

4. The EU welcomes the Western Balkans partners commitment to the primacy of democracy and the rule of law, especially the fight against corruption and organised crime, good governance, as well as respect for human rights and rights of persons belonging to minorities. Their effective implementation of reforms rests on these foundations. Civil society and independent media play a crucial role in the process of democratisation.

5. The EU supports the Western Balkans partners pledge to continue strengthening good neighbourly relations, regional stability and mutual cooperation. This includes in particular finding and implementing definitive, inclusive and binding solutions for their bilateral disputes rooted in the legacy of the past and devoting additional efforts to reconciliation.

6. Constructing a dense web of connections and opportunities within the region and with the EU is vital for bringing our citizens and economies closer together, and for enhancing political stability, economic prosperity, cultural and social development. Building on progress made, including through regional initiatives, we pledge to enhance substantially connectivity in all its dimensions: transport, energy, digital, economic and human.

7. The EU agrees to promote a market- and investment-friendly environment in the Western Balkans to move faster towards a digital economy and to sustainable and climate-friendly societies in line with the Paris agreement. Energy security will be prioritised, including through improved energy efficiency, better cross-border inter-connections, diversification of sources and routes, as well as a balanced energy mix better integrating renewable energy.

8. Special emphasis will be put toward creating further opportunities for the youth, while ensuring that this contributes to the socio-economic development of the Western Balkans.

9. To that end, the EU welcomes the Western Balkans partners commitment, inter alia, to accelerate the implementation of the acquis under the Energy Community and Transport Community Treaties, to remove all administrative barriers at borders, to complete the Regional Electricity Market and to urgently implement the July 2017 Multiannual Action Plan for the Development of a Regional Economic Area. The EU will continue to support these efforts.

10. The EU and the Western Balkans partners share many security challenges that demand coordinated individual and collective action. When we work together, we are able to address these challenges effectively. Our cooperation in stemming illegal migration flows has demonstrated its value and will be developed further.

11. Countering terrorism and extremism, including financing, radicalisation and the return of foreign terrorist fighters require our increased cooperation.

12. The EU and the Western Balkans partners acknowledge that results in fighting corruption and organised crime are essential for the region’s political and socio-economic transformation and also for regional stability and security, which are in the best interest of their citizens. The EU welcomes their commitment to take resolute action, in cooperation with the EU and with each other, against human trafficking, drug cultivation, and smuggling of human beings, drugs and arms.

13. The EU welcomes the contribution of the Western Balkans partners to its Common Foreign and Security Policy (CFSP) in all its aspects and expects a progressive deepening of cooperation in this area, especially an enhanced level of alignment, notably on issues where major common interests are at stake.

14. Disinformation and other hybrid activities will be fought together through greater collaboration in resilience, cyber security and strategic communication.

15. To accelerate improvement in the lives of our citizens in the areas of connectivity and security in view of the European perspective of the Western Balkans, today, drawing on the relevant aspects of the Commission’s Communication adopted on 6 February 2018, the EU launched a Sofia Priority Agenda for the EU and the Western Balkans, which is annexed to this Declaration.

16. The EU welcomes the intention of Croatia to host an EU-Western Balkans Summit during its Presidency in 2020.

17. We note that our Western Balkans Partners align themselves with the above points.

Full text of Declaration with Annex you can find here.

Highlights of the EU – Western Balkans Summit in Sofia

Speak Up! 3 Conference – Freedom of Expression and Media