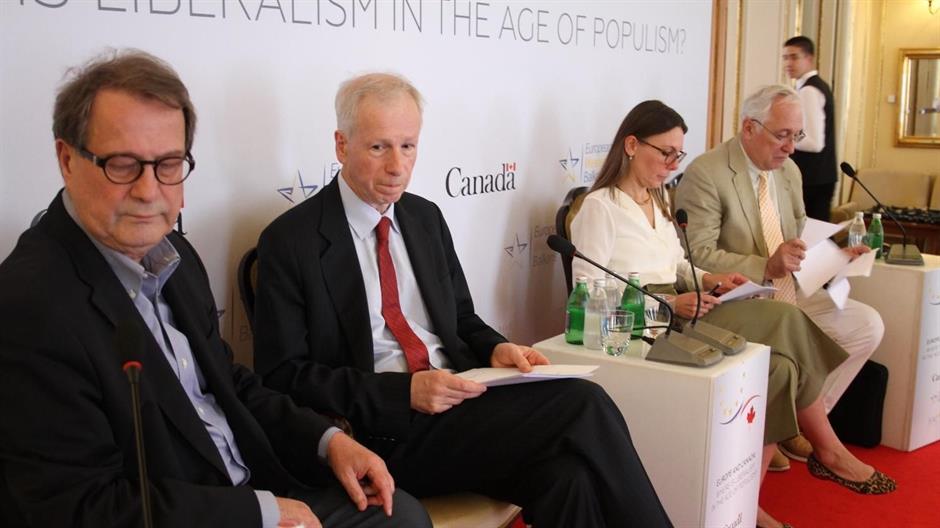 BELGRADE – “During the time when different types of authoritarian populism challenge democracy all around the globe, it is vital that the countries of the Western Balkans show to the world that democracy is the right choice”, said Stephane Dion, Canadian Special Envoy to the European Union and Europe and Ambassador to Federal Republic Germany, as well as former Minister of Foreign Affairs of Canada at the event “Europe and Canada – Where is Liberalism in the Age of Populism”, organized by the portal European Western Balkans, the Canadian Embassy in Serbia and the ISAC Fund.

Precisely because Western Balkans survived the worst, which was the result of extreme nationalism, it is important for the region to succeed in establishing democracy and show that it is possible to arrive to the best outcome in spite of the worst start, Ambassador Dion said.

According to the Ambassador, the message for the entire region is that people must say: “We are proud of who we are and therefore we shall show to the world that we can establish a model of democratic society”. Additionally, he remarked that the citizens of the Western Balkans would feel proud if they established a strong liberal democracy with an independent judiciary, media freedom and a strong civil society, which would help them to do away corruption.

Ambassador Dion has indicated that Canada supports Serbia’s path towards the EU and that Serbia should demonstrate how it can contribute to the strength of the Union. In addition, he noted that the Commission’s Report from this year contains a list of standards that Serbia can and should achieve, but that these standards should not be viewed as external obstacles to accessing the European funds.

He believes that the Western Balkans have much to offer in the struggle for liberal democracy, despite the considerable challenges of today.

When it comes to populism and its present use, Gordana Delić, Director of the Balkan Trust for Democracy of the German Marshall Fund of the United States, pointed out that the leaders in the Western Balkans are not so much nationalist as they are populist, using the political strategy that best suits their interests (and are by all means not alone in this, which shows the example of Hungary).

Delić believes that the EU is partially responsible for such a situation – choosing stability over democracy, which is a poor decision in the long run. She mentioned international cooperation as something that the region is in the need of. Foreign direct investments are welcome, but they should be result of good business practices and not murky deals.

Professor at the University of Belgrade and former Ambassador of Serbia to the United States of America, Ivan Vujačić, thinks that the evaluation of the rise of populism and its relationship with democracy is largely dependent on the perspective.

“Populism exists at least as long as the universal suffrage. Is it justifiable for this term to be used only for people that we do not like, and not for example (French President) Macron?”, Vujačić asked.

He concluded that several conditions are needed for democracy to function. Educated and experienced politicians, pluralism as well as consensus on important issues, but also professional and neutral bureaucracy are all conditions for a functional democratic society. In his view, Canada meets all the conditions, but that can not be said for many Western countries.

Professor Vujačić interprets the European Commission Report of 2018 as almost a suggestion to our community that we are dealing with a captured state. He is of the opinion that the EU, when it comes to enlargement, needs to be guided by some basic values, rather than formulating it only as reaching an agreement (for example, between Kosovo and Serbia or Macedonia and Greece).

Asked about the potential role models for establishing liberal democracies in the Western Balkans, considering the fact that it is endangered in many former role-model countries, Ambassador Dion pointed out that several factors can endanger democracy. These are, according to him, inequality within the country, migrations combined with the the aging population and the example of an authoritarian regime, such as China, that achieves economic results.

“Sweden or Canada can be the role models, but one would need a wealthier society to achieve their standards,” added Gordana Delić.

In order for the region to confront the rising populism, central goals must be respect for the universal human rights, first of all the right to work, and reestablishing the importance of the elections, which have lost their purpose and nowadays serve only to demonstrate the power that a tight majority holds over the rest of society, she noted.

“The greatest threat to democracy are the people, we must always put an extra amount of effort to preserve it,” concluded Professor Vujačić.

Hoxha, Osmani: Kosovo and Macedonia to be included in enlargement plans

Dimitrov: Political reconciliation is necessary for our EU path