BELGRADE – The will of the political leaders of the post-Yugoslav countries is the basic precondition for reconciliation and lasting stability in the region, was the conclusion of the conference organized today by the Initiative for the Establishment of RECOM, the Regional Commission for the Establishment of Facts on War Crimes and Other Serious Human Rights Violations in the area of the former SFR Yugoslavia.

Action Plan for the establishment and initiation of the Commission’s work was presented at the conference, as well as a new project through which the RECOM Initiative plans to strengthen a regional network of civil society organizations dedicated to reconciliation.

The new project is based on the EU Enlargement Strategy for the Western Balkans, in which the initiative to support reconciliation and good neighborly relations is clearly stated as a priority, said Nataša Kandić, RECOM project coordinator, adding that the innovation compared to previous projects is that it’s focused on expert support to state institutions.

As the second inovation, Kandić pointed out the initiative of RECOM to gain the support of all of regional leaders within the framework of the Berlin Process.

“Four presidents have already given the political promise to support the establishment of RECOM, and the goal of our public advocates in the coming period is the return of Croatia and integration of Bosnia and Herzegovina into the process of reconciliation,” Kandić said.

One of the most important elements of the new project is strengthening the network of civil society organizations, which is the third new priority of the Initiative, she added.

Kandić emphasized that the civil society played a major role in collecting the names and circumstances of the deaths of the victims, including the members of the armed forces, and the only remaining thing is that large number of available data should be combined and methodologically harmonized at the regional level.

As the main advantage of civil society organizations’ approach over the previous efforts of other institutions, she names the field investigation, the identification of all victims and the collection of statements by all available witnesses, which “give voice to victims”.

“The Court in The Hague (ICTY) has managed to establish the identity of 11 to 12 thousand victims, and the fieldwork of Documenta, the Humanitarian Law Center in Serbia and the Humanitarian Law Center in Kosovo have managed to establish 22-23 thousand names of victims and the circumstances under which they were killed” she said. 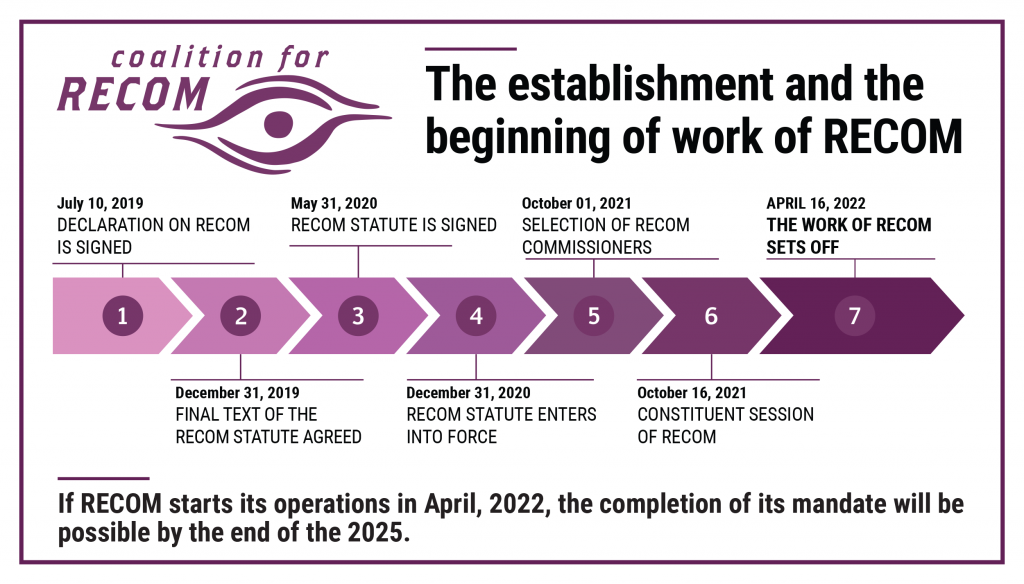 Creation of a joint register would ensure respect for all of the victims of wars, as well as ensure the future of regional cooperation and security, said Ana Marjanović Rudan from RECOM.

“Inflammatory narratives to which all the communities (in the Balkans) are exposed lead to the strengthening of nationalism and extremism,” said Marjanović Rudan.

She added that great progress in the reconciliation process was made in 2014, when the future mandate of the Commission was defined, and when the good will of the presidents of the four states to resolve the issue of reconciliation was expressed.

“RECOM was not established that year, and the interest of all countries to begin this process as soon as possible remains,” said Marjanović Rudan, adding that it is important that the Declaration is signed at the forthcoming London Conference, and that the remaining countries subsequently join.

The Action Plan for the commencement of the work of RECOM in the next three years envisages the harmonization of the text of the Declaration, its signing at the July Summit in London, the ratification of the Statute of the Commission, and the nomination of candidates in all countries, and the activities would culminate in the constituent session of RECOM, the election of the Chairperson and the adoption of rules of procedure by the end of 2021.

She also said that in the creation of political will for this act, EU support is crucial, but so is the public pressure on decision-makers.

The main goal of the new project is strengthening the network of civil society organizations and the return of the topic of reconciliation and war crimes prosecution into the public discourse, said Daliborka Uljarević, Executive Director of the Center for Civic Education from Montenegro.

“It is normal that politicians are avoiding this topic, because it is on these topics that elections are lost. Still, these efforts are important in the process of healing our societies“, said Uljarević.

She added that the activities of the new project are directed towards advocacy, but also networking and supporting small local initiatives. For this purpose, 100 000 euros are designated within the project, dedicated to grants for small organizations for up to 4000 euros.

“At the centre of all these efforts are the victims and objective knowledge of the circumstances under which they disappeared or died,” said Vesna Teršelič, director of Documenta – Center for dealing with the past, from Croatia.

She said that willingness of Croatia and its will to establish the fate of the victims had been diminishing since the country’s accession to the EU.

“Since the accession of Croatia, we see that trials for war crimes have slowed down, and that for more than a year there has not been a meeting of Prosecutors for war crimes, which was previously regularly organized at Brioni,” she said, adding that representatives of Croatian ministries of justice and foreign and European affairs expressed “reservation” due to the Statute of RECOM.

“This statute has been improved in the meantime, but there is still no answer from the relevant ministries,” Teršelič said.

She has also said that “all this is happening in the atmosphere of societies in which the wars have not ended, where there are still existing legacies of the Second World War, the Holocaust, the sufferings after the end of that war, all until the last conflicts in Macedonia”, and that because of this the fate of the missing “remains as the hardest question”.

She has also pointed out that Documenta will participate in the RECOM activities and will make its data available to other countries even if the Commission does not receive the support of the Croatian authorities.

“Only in this way can we come closer to reconciliation,” she concluded.

RECOM is the Regional Commission for the Establishment of Facts on War Crimes and Other Serious Human Rights Violations Committed in the Territory of the former SFRY from January 1, 1991 to December 31, 2001, whose establishment is supported by the RECOM Initiative.

The RECOM Initiative invites the post-Yugoslav state to jointly establish this Commission, and establish the facts relevant to the history and the future of the entire territory of the former Yugoslavia, which will be equally acceptable to all formerly conflicted parties. By the end of 2014, the initiative for establishing RECOM was supported by signatures of more than 580,000 people from all over the former Yugoslavia.