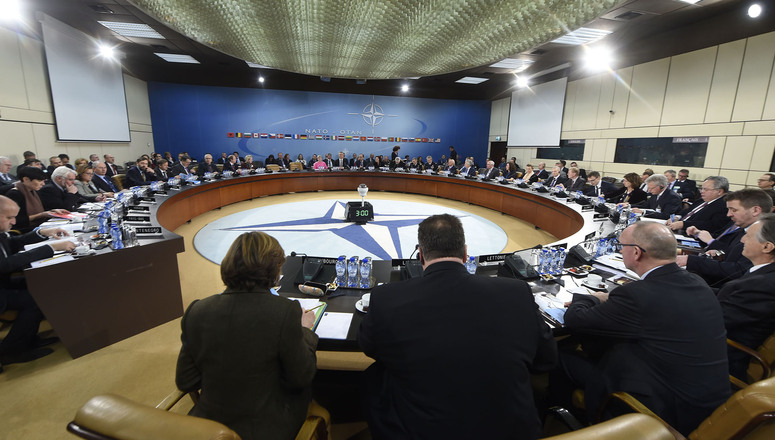 Meetings of the Ministers of Foreign Affairs at NATO Headquarters in Brussels- Meeting of the North Atlantic Council; Photo: NATO

WASHINGTON – The outcome of the name talks is anticipated at NATO headquarters in Brussels. Macedonia meets all the conditions, the final step is completing the name negotiations for Macedonia to begin NATO accession process at the upcoming summit in July, said US Permanent Representative to NATO Kay Bailey Hutchison.

“From the previous summits, it is clear that NATO is ready to start the accession talks with Macedonia once the name issue is resolved. I believe that the ministers in both countries are working very hard to reach a mutually acceptable solution to the name issue. Once an agreement is reached and the key requirement is fulfilled, I think that Macedonia will start the process of accession to NATO. NATO was clear that Macedonia meets the requirements, except for the name and as soon as this is resolved, we wish for Macedonia to be an equal partner. The United States strongly supports the accession of Macedonia and we hope that this will happen at the upcoming Summit, but what is now required of both countries is to complete the negotiations and pave the way for Macedonia’s accession”, said Hutchison.

The ambassador said that the Alliance will do everything possible to protect Macedonia from what it calls Russian aggression, even though the country’s admission to the organization has not yet begun due to the unsettled name issue, RIA News reports.

“If the name dispute is not resolved by the NATO summit is over and the procedure for the country’s admission is not started, we will continue to work to protect the country from any harmful influences. We have close working relations with Macedonia, and in NATO we will do everything possible to help the country resist the devastating influence by Russia, whether it is a hybrid war or any other activity”, said Hutchison.

The NATO summit will be held in early July in Brussels.

Osmani – Mogherini: The next few hours could be crucial to outcome of negotiations

Marković: Montenegro influenced neighbouring countries on their path towards EU

Spain: We will not boycott Zagreb Summit over Kosovo’s presence