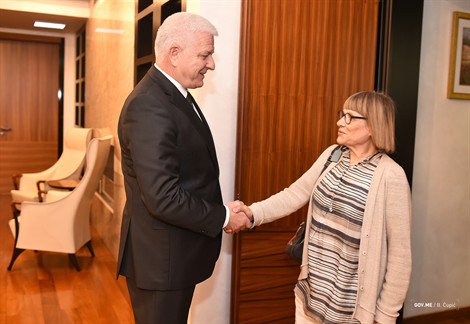 PODGORICA – Prime minister of Montenegro Duško Marković has expressed an absolute support of Montenegro’s towards Initiative for the establishment of the Regional Commission for the Establishment of Facts on War Crimes and Other Serious Human Rights Violations Committed in the Territory of the former Yugoslavia from 1 January 1991 to 31 December 2001 (RECOM), his cabinet satated after meeting with Initiative’s Coordinator Nataša Kandić.

“Montenegro wants for this Initiative to gain the support of all the countries in the region, so that the coming generations would gain a picture of the ugly part of our past, never to repeat it. We will do everything to make the Initiative lives”, said Prime Minister Duško Marković.

On this occasion, he assessed that the civil sector has done a lot in terms of regional reconciliation, that it now it is necessary to involve state institutions throughout the post-Yugoslav space in this process and that the Government of Montenegro will also consider the Initiative at the next session.

“You do not have only my support as PM, but you will, I believe, have the support of the Government, so that Montenegro will once again express its responsibility and its clear supporting position“, Marković said, adding that he is ready to discuss the idea with the leaders of the states in the region.

Nataša Kandić, public advocate of RECOM for Montenegro Dragoljub Duško Vuković and spokesperson of the Initiative for RECOM in Montenegro Tamara Milaš have thanked Marković for the continuous strong support of Montenegro and on the readiness of both the Government and the Prime Minister for support of this important process in the future.

“What happened was what I expected. So far, we had all the doors open in Montenegro, support of all institutions and of government and the opposition. That’s why I have always felt good as a public advocate for Montenegro, because this Initiative has never came under question in this country”, Vuković said at the meeting.