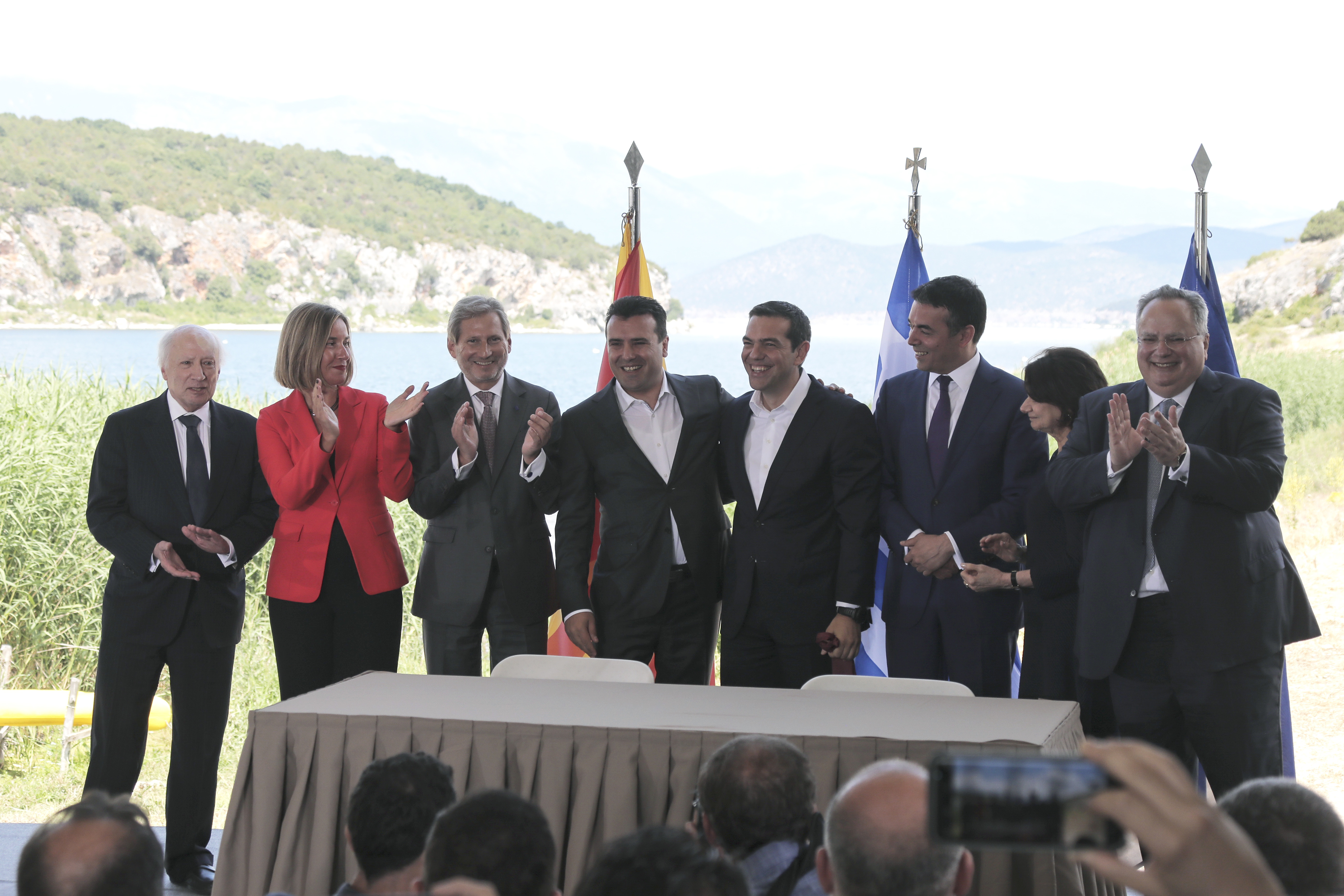 Macedonia has been given its third chance at state-building. Its first chance was when it (peacefully) declared independence from Yugoslavia, the second was the Ohrid Framework Agreement (OFA), and the third is this month’s agreement on the name dispute and on strategic partnership between the Macedonian and Greek government. There are many citizens in Macedonia who do not see either the second or third chance as such, but rather consider them sacrifices or concessions; however, they represent important steps forward, and this latest chance is no exception.

The reactions to the name agreement in Macedonia have been various and nuanced. While many are unhappy with the fact that the name will have to be changed, there is a large portion of the population who appreciate the importance of the agreement in pushing Macedonia forward on its path towards EU integration. However, there are many who disagree with the name change, and a campaign against it started as soon as the agreement was declared. Among those who disagree, there are two general categories: one category thinks that the agreement is not a great departure from those offered to Macedonia in the past; the other is a nationalist phalanx, which has been violently protesting in front of the parliament in Skopje for the past several days.

For many Macedonian citizens this deal is not going to be easy to swallow; nor should it be. The decision standing in front of the politicians (and the citizens, when it comes to the referendum) is an important one, and for many it is also a very personal one. In the case of such decisions, a period of serious reflection is necessary and important to the process.

Since the decision is not an easy one but has permanent repercussions, it should in no way feel imposed or “shoved down the throat”. Instead it must allow room for a broad and open discussion of the agreement. Within this debate, the current protests in Macedonia as well as the nationalist fear-mongering and disinformation is not constructive. A Brexit scenario must be avoided by all means: the vote on the name change, whether for or against, must involve both sides arguing with the facts, otherwise the citizens of Macedonia will risk making a decision based on misinformation on a deal that will likely not be repeated in the near future. Herein the manner in which political parties, the media, the non-governmental sector and the public personas choose to debate is crucial. While differing opinions must be given space, it is unacceptable that some politicians and public intellectuals have started to intentionally deceive the public, polarising the issue further. For such an important decision, it is imperative that citizens understand what exactly they are voting for, and are reminded of the lessons of Brexit. It would be devastating to wake up to a vote which holds back the country’s future.

The government has a key role to play in not only informing the public of the fine print of the deal, but also in developing a clear plan of how it intends to continue the EU integration process,  and highlighting the benefits the country can receive from this integration. The real pressure that the name deal will put on the government will be tremendous, as citizens will surely feel more invested in the process if they consciously make an important decision such as the name change. Thus the rule of law and transparency must be the cornerstones of the current and any future governments. This change cannot be based on empty promises, and the government will have to work hard to establish that there is a clear path towards the EU and NATO. The latter institutions must also continue their enthusiasm and support throughout the process and well afterwards.

The Brexit experience teaches us another important lesson for consideration prior to the vote. In the UK, it was mostly the older cohort of citizens that voted in support of Brexit, while the younger generations voted against it. In Macedonia, the opening of opportunities for young people is more important than ever. Reflector, a data site, posted statistics from a study claiming that 60% of young people want to leave Macedonia. During my own research on activists in Tetovo, in two Focus Group Discussions, all but one of the participants noted that they would like to leave Macedonia as they do not see a future there. While the movement of populations is not new, and not necessarily catastrophic, the fact that they do so because they see no future in Macedonia is very concerning. The re-starting of the EU integration process, and the boost that the name change will provide in this regard, can have positive repercussions in providing, at the very least, a brighter outlook for the future. Many, including myself, have decided to leave Macedonia in search of a better future. Still many of us continue to see the country as being involved in their future, not excluding the option of return. This return, whether it be business-related, professional, or personal, would be easier if the country offered security, trust and opportunities which are open to the world. While the change of the name does not magically erase all obstacles the country is facing, it is certainly a step in the right direction. The decision to change the name will be a decision to change the future, and the political parties and public institutions will have a greater responsibility in attaining this change and taking full advantage of the doors that the name change will open.

I would be amiss if I failed to observe the potential this third chance Macedonia has for its second chance, and not only because both of them were signed on the shores of two lakes. Under the new name, Macedonia has the chance to fundamentally redefine itself in relation to how the country is seen, and who is considered to be its citizens. This redefinition has continued to prove elusive since the signing of the Ohrid Framework Agreement, but the country now has a chance to do things right. I realise that this position is not the most popular: many in Macedonia might even consider it counterproductive. Indeed, there are many Macedonians who believe the name issue is no concern of ethnic Albanians or other minorities, as it hinges on the ethnic Macedonian identity. Still others think that, because of the contentiousness of this issue, the multi-ethnic potential of the name change should not be brought forward as it might risk angering those who would be against such changes and against the principles of the OFA. However, I would argue that it is a mistake and a missed opportunity not to do so. The protestors in front of the parliament loudly chant “let the cursed Albanians[2] realise that this is Macedonia,” and if we choose to not address the positioning of Albanians in this debate and the fact that their loyalty is continually doubted and their belonging questioned, then there is a risk of more harm being done in the domestic context. In fact, this must be addressed and tackled before the referendum vote takes place, as the process might become heated on account of the fact that a vote in support of the name change might pass because of the Albanian vote. If this is the case, then the opposing camp could seek to be delegitimise the vote precisely on the basis that it was carried by the vote of minorities.

It is true that the majority of Albanians support the name change and have done so for years, but this is not primarily out of spite, as some ethnic Macedonians believe. Rather, Albanians have long been strong supporters of EU integration, as they consider that their position would be secured within the Union. Indeed the Democratic Union for Integration (DUI), which has had a majority of the Albanian vote since 2002, has always had EU integration as its top priority. The name issue presented a key obstacle towards this objective. Another reason why a name change is favourable is because it does represent an opportunity to access the promise of citizenship in Macedonia. Namely, with a new name, Macedonia has an opportunity to offer an outlook for all citizens, and not only ethnic Macedonians. The young activists of Tetovo I mentioned earlier were all ethnic Albanians, and one of their main points of alienation was the fact that they did not feel that the state saw them as belonging to it, thus the idea of leaving it became more appealing. The government and the citizens must grasp this opportunity to form a Macedonia for all of its citizens, in spirit as well as in practice. As such, the agreement and its passing represent not only an opportunity, but a reason to hope. In these dark times, who doesn’t need hope?

This article was originally published on the BiEPAG Blog and can be accessed here.

KFOR – Still the only guarantor of peace in Kosovo?

University Assistant at the Centre for Southeast European Studies (CSEES). Previously worked at the Secretariat for European Affairs in the Republic of Macedonia and for the European Centre for Minority Rights (ECMI) Kosovo.